Costumes are so passé. Flying suits are the shizz! If you’re Lady Gaga anyway! The Monster Mother’s latest appearance seems to have taken a cue from the Martin Jetpack. No meat dress or shell parasol this, the Artpop artist’s latest promotional feat involved actual flying antics.

The Haus of Gaga seems to be taking after NASA, albeit with more ‘Avant-Garde and ‘admin’ less. Its TechHaus branch recently designed Volantis, a hovercraft leading to an airborne Gaga at a Brooklyn event. The controversial songstress who also announced plans of performing in space, outdid her own self when she went from outfit to latex outfit, only to end the night three feet off of the ground, with a flying fiberglass dress. Practice for space, was it? 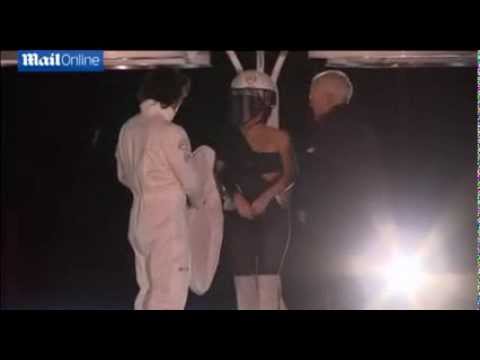 As usual, the inspiration for this creation was Gaga’s loyal Little Monsters fan base. “Volantis is essentially a vehicle,” she told the audience. “Although [Volantis] is a vehicle, she is essentially a metaphor for me. I will be a vehicle today for their voices… Youth all over the world.” Also in attendance were artworks by Jeff Koons, Inez and Vinoodh, and Marina Abramovic, which made their debut at the event. And by “event,” I mean “secret party” that Gaga threw at the Brooklyn Navy Yard, where she also performed new tracks for her fans from her latest album. We wonder if pop nemesis Katy Perry would take a shot at it next!