Have you missed Melania Trump since their White House exit in January? After keeping a low profile for almost a year, the former US First Lady is back in action. Keeping up with the current trend, Trump has joined the NFT craze and is offering prints of her piercing cobalt blue eyes as NFT along with a complimentary voice message. Melania Trump is not the first person to digitize a body part; Polish singer Dorota Rabczewska, aka Doda, was the first person in the world to digitize her entire body and sell it in pieces as NFT’s. Slovenian photographer Stane Jerko discovered Melania while sitting on the fence waiting for her friend to walk in a fashion show. “It was January 1987 when I went home just before the end of the fashion show,” Jerko told Today via email. “On the stairs of the Festival Hall, I saw a girl that immediately caught my eye. There stood a tall, slender, and attractive long-haired girl with distinct eyes.” Her distinct eyes have always caught the world’s attention, and undoubtedly, the NFT will have many takers. 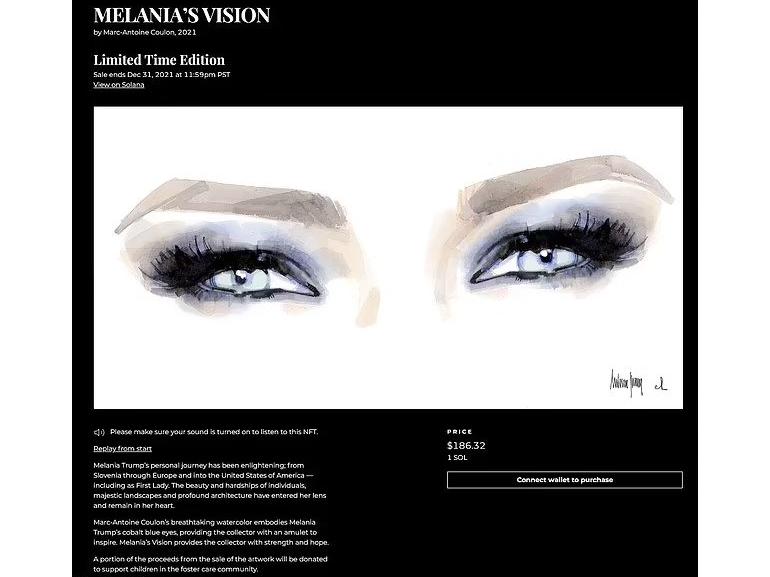 What is this NFT about?
Before Melania became all about Donald Trump, she was a model known for her looks, and those eyes played a big, blue part in it. Melania makes her NFT debut by offering a watercolor painting of her eyes and a complimentary voice message. It is dubbed ‘Melania’s Vision’ and created by French artist Marc-Antoine Coulon. The audio message included is, ‘My vision is: Look forward with inspiration, strength, and courage.’ Trump’s first sale ends December 31, the minute before midnight on New Year’s, and is priced at about $185. An excited Melania took to Twitter to share her excitement. She wrote, ‘Excited for this new venture, which combines my passion for art and commitment to helping our Nation’s children fulfill their own unique American Dream. #MelaniaNFT http://MelaniaTrump.com‘ her official website MelaniaTrump.com states the NFTs will be released at regular intervals and also at an auction as a “digital artwork, physical artwork, and a physical one-of-a-kind accessory.” Melania’s vision NFTs will be sold exclusively on her website.


There are charitable angles too:
The NFT won’t be yet another Trump business but has charitable causes attached. According to News ArtNet, the 45th First Lady said in a statement, “I am proud to announce my new NFT endeavor, which embodies my passion for the arts, and will support my ongoing commitment to children through my Be Best initiative. Through this new technology-based platform, we will provide children computer science skills, including programming and software development, to thrive after they age out of the foster community.”
Twitter responds:
Twitter users remain divided into the thousands of retweets and replies that came flooding in. While some encouraged Mrs. Trump, others were skeptical and cynical towards her venture. Whether it is a notion against NFT’s or general Trump hatred can’t be discerned. One user Brett Rosemann was hopeful, ‘Mrs. Melania Trump, I pray all of ur plans will prevail.’ a user by the name of Liz Beybey commented, “More grift & money laundering? Remember when it’s you getting the visit from the Feds, your orange husband will throw you under the bus.” Another user wondered, “Is this a scam?” Trump supporters didn’t shy away from showing the support as one user posted, ‘Quite possibly one of the classiest First Ladies in US History. Thank you, Melania. #2024Trump.’ So far, Melania Trump’s announcement tweet has got 4204 retweets and 21.9K likes.

What are NFTs?
These are unique and non-interchangeable units of data stored on a digital ledger commonly known as blockchain. This digital ledger provides a public certificate of authenticity or proof of ownership, but it does not restrict the sharing or copying of the underlying digital file. Blockchain technology has also been used to publicly register and authenticate preexisting physical artworks to differentiate them from forgeries and verify their ownership via physical trackers or labels.