Neymar, Dele Alli, Cristiano Ronaldo and Sergio Ramos and their respective partners catch the eye with their fashion sense

It you think of stylish soccer couples, then former England captain David Beckham and his pop-star-turned-fashion-designer-wife, Victoria – who regularly made headlines, and the covers of numerous fashion magazines, thanks to his ever-changing hairstyles and fashionable attire – instantly spring to mind.

So who are the current crop of stylish soccer stars and their partners?

With the Fifa World Cup 2018 tournament in Russia now at the last-16 knockout stages, here is our top 4 of eye-catching internationals and their partners.

1. Neymar and Bruna Marquezine
The 26-year-old Brazil forward Neymar and his 19-year-old actress-model girlfriend, Bruna, are rising stars in the fashion world. Both have appeared on numerous magazine covers and in the commercials of leading brands.

The couple have never looked out of place on the red carpet at society events.

The Paris Saint-Germain player is the world’s most expensive soccer player – having been signed by the French club in 2017 from Spanish giants Barcelona for €222 million (about US$260 million) – and he has the luxurious wardrobe to match the status.

He often wears ritzy fabrics such as velvet, as well as leathers including nubuck and suede, which add touches of elegance to his playful personality.

In his daily attire, Neymar prefers hip-hop-style outfits, coloured sunglasses with irregular rims, and shiny ear studs. He also likes to dress in denims and overalls.

#BeEpic Extraordinary People Impact Change Amfar (The Foundation for AIDS research) Gala 2018 at São Paulo Wearing @versace #atelierversace Such a special night to support such an important cause. (@neymarjr I’m so proud of you! You deserve it all ❤️ @institutoneymarjr 👏🏼)

Bruna has a penchant for wearing Versace and Gucci outfits on the red carpet.

The stunning white jumpsuit and sheer silk chiffon skirt she wore at Sao Paulo’s amfAR Gala 2018, from the Atelier Versace autumn 2017 collection, were adorned with thousands of Swarovski crystals, which illuminated the whole look.

Like her personality, Bruna is bold when it comes to fashion.

Although she stands only 164 centimetres (5 feet 3 inches) tall, the Brazilian beauty is always confident to flaunt her perfectly proportioned body.

The couple recently featured in an intimate commercial for the lingerie line #Brumar – a name formed from combining “Bruna” and “Neymar” – for the fashion retailer brand C & A Brazil.

2. Dele Alli and Ruby Mae
The England midfielder Dele Alli is not only a rising star on the soccer pitch. The Tottenham Hotspur player and his gorgeous lingerie-model girlfriend, Ruby Mae are another couple with a passion for clothes – and an equally high profile in the fashion world.

The couple have been dating for at least two years – something that was confirmed at the Allianz Riviera stadium in France after England were beaten by Iceland at Euro 2016, when the brunette beauty gave a consolation kiss to Alli beside the pitch. 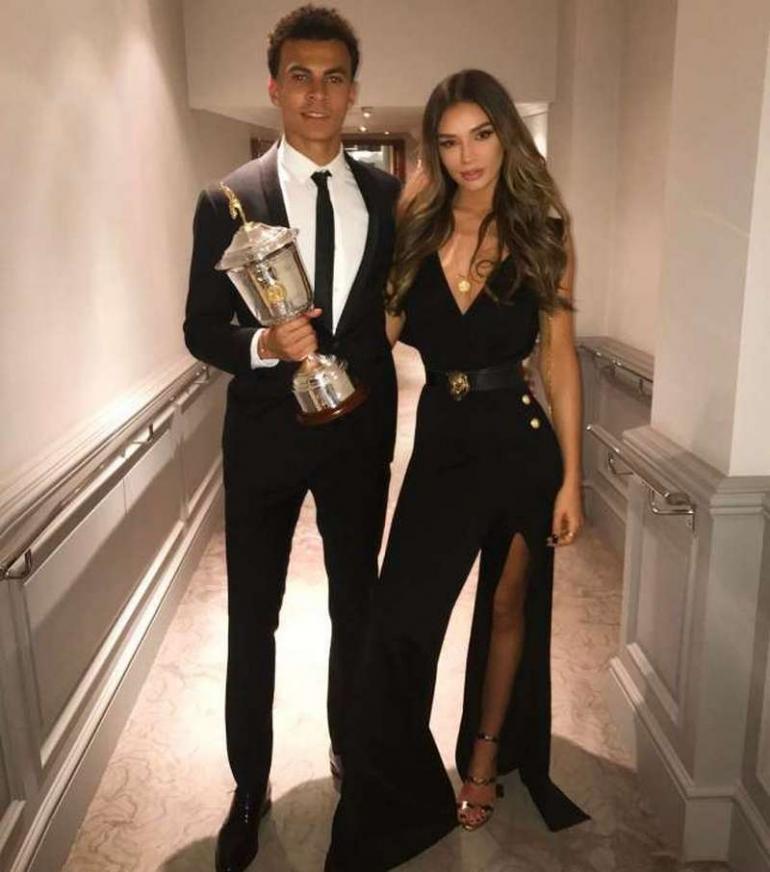 Since that touchline kiss, the couple have often been photographed in romantic moments and enjoying lavish holidays together.

The couple showed up together at the launch party of his collection on May 11, when Dele wore a golden satin bomber jacket over the top of a checked shirt.

His jacket matched the look of his ripped denim jeans and brown desert boots.

Dele’s gold metal-rimmed glasses were among the highlights of his appearance, adding a delicate touch to his urban-style look.

The irregular tassels on the dress showed a sense of rebellion and lit up the sweet, fairy-tale-like dress.

Her multilayered necklace had a bohemian vibe that matched Dele’s urban style.

Dele is a big fan of casual streetwear in his daily life, and, like many soccer players, he favours sporty outfits.

He has a penchant for denim, his main fabric for most occasions, whether shopping with his girlfriend or attending ceremonies.

Dele Alli goes on a special night out with his beautiful girlfriend. Best couple in football! 👀https://t.co/T1TCzEwCHw pic.twitter.com/dYoI1Fi4Ni

Dele has been featured in British GQ magazine and also pictured on the covers of Britain’s ES and FS magazines.

His tall, sturdy build is perfect for wearing nicely tailored shirts and suits.

Compared with her boyfriend, the 23-year-old bombshell has a bolder sense of style in her daily outfits, with a passion for modern, edgy urban wear.

The lingerie model showed up in London during the World Cup wearing a headline-grabbing, sexy, see-through sheer cropped-top, which showed off her sizzling figure.

She paired her top with a sporty bomber jacket and diamante-studded shorts.

Her flamboyant red eyewear and handbag added colour to the overall black colours of her outfit and showed a strong side to her personality.

3. Cristiano Ronaldo and Georgina Rodriguez
The couple made their first public appearance together Cristiano scooped the Best Fifa Men’s Player of the Year Award in 2016. Since then, the Spanish model and the Real Madrid star have contributed many stunning looks on the red, or green, carpet.

If you had to pick a Fifa star that best suited a tuxedo, Cristiano would be one of the top choices. The Portuguese player has a sculpted form and charming smile, making him look like a gentleman from the 1960s with his well-tended hairstyle, and he seems to know what makes him look good. Retro design is his top pick, but he also chooses bright colours and trendy fabrics to break the dullness of the retro look.

It is said that Georgina was still a nanny a month before she met Cristiano at a Gucci fashion party, which sounds like a Cinderella story. However, the Cinderella knows what to wear without the help of any fairy godmother.

Trained as a dancer, the Spanish model has a figure that goes well with any outfit, even after she gave birth to her first child with Cristiano and is now pregnant with the second.

Georgina’s formal evening gowns always come with clean lines and slick tailoring, which flatter her curves. The 23-year-old model tends to choose classic colours and designs, like this long sling dress she wore to the Balloon d’Or ceremony in 2017.

She also knows how to use fancy, extravagant fine jewellery. The Spanish beauty loves large round earrings with modern design and materials such as metal, plastic, fabrics and pebbles.

4. Sergio Ramos and Pilar Rubio
The 32-year-old Spanish captain Sergio Ramos is considered one of the world’s finest central defenders, and he also defends his taste of fashion. His girlfriend Pilar Rubio, the 40-year-old Spanish reporter and TV presenter of the television network La Sexta, is an elegant beauty with stunning almond-shaped eyes. The couple have been dating for seven years and often show up on important occasions together.

The Real Madrid defender was selected as one of the “Vogue’s 10 Most Stylish Footballers” in 2018 by Italian Vogue. Sergio is also an amateur rapper, which might explain why he fancies flamboyant and exotic patterns and fabrics. Sergio is one of the few soccer players who can master a satin tuxedo with dark leopard print. He certainly takes pride in his curves and edges, which he often shows off with perfectly-fitted suits and tuxedos.

The gorgeous girlfriend of Sergio, Pilar Rubio, is a mother of three, but she retains a stunning figure. She was selected as the sexiest woman in the world by the Spanish edition of the FHM magazine in 2008 and 2009. The Spanish star has over 2.2 million Instagram followers.

Like her boyfriend, Pilar favours tight wasp-wasted gowns with textural quality that can flash her slender figure. She also likes paillette, sequins or glitters, so she seems to have many spangly dresses and heels.