A cat that inspires a capsule collection and gives interviews in French as well! That’s a fashion first and probably the only one of its kind to come, but a great kind as the feline in question is none other than Karl Lagerfeld’s prized pet. Choupette has sparked a string of chic accessories, which is no surprise as the doting designer simply had to have the Siamese in a collection. Clearly, this is one kitty that won’t stop chasing strings.

“In general, I’m with him when he travels, unless he’s coming back on the same day,” purred the pampered kitty to the good folks at French site, Gala. “If not, I follow him everywhere, Monte-Carlo, Ramatuelle, New York, Rome, Dallas, etc.” So much so that she has now followed him into fashion, furry paws et al. Decked in the designer’s signature monochrome, the selection features a leather cat-shaped tote bag, fingerless gloves, a key chain, a wool scarf, a cross-body bag, and iPad and iPhone covers. It also includes a knitted cap with cat’s ears and leather whiskers à la Choupette. 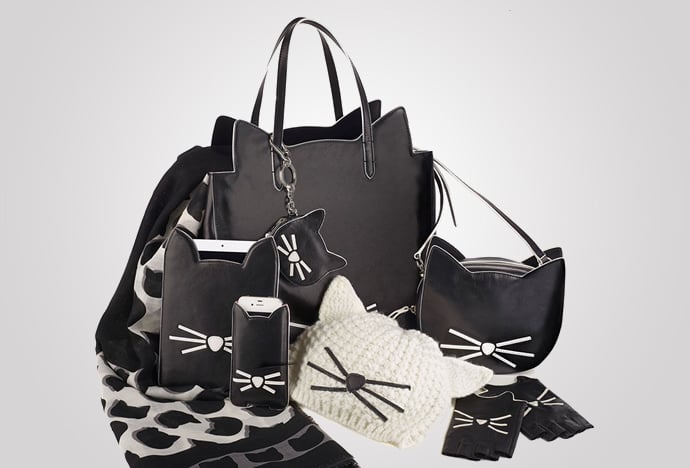 So, while Lagerfeld’s Tokidoki collection was a total hit, let’s see how feline fancy fares when this one hits stores November 12. It sells exclusively at Karl Lagerfeld stores in Paris, Berlin, Munich, Amsterdam, Beijing, Shanghai, and Antwerp. But for now, I would say mew to the prices that start at $62 for a knitted cap to $470 for a leather bag.

[Via – Vogue and Fashionista and Papermag]