Entomology at its designer best! Dubbed “Entomology”, Prada has designed bug-ged handbags, literally, in collaboration with Damien Hirst. Fortunately for Entomophobic fashionistas, they are limited edition and all sold. A recent auction, at what’s come to be known as Prada Oasis stylishly saw to it. The creative oasis was paired with Damien Hirst’s Pharmacy Juice Bar, a spin off from the artist’s earlier Pharmacy Restaurant project. In the desert north of Doha, Qatar! All thanks to the Her Excellency Sheikha Al Mayassa bint Hamad Al-Thani, chairperson of Qatar Museums Authority (QMA), who was the third hand in this collaboration. The artistic project was launched to mark a major retrospective of Hirst’s held in QMA, called “Relics”. 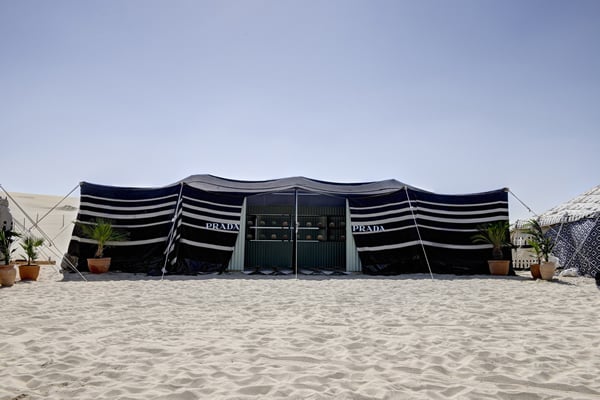 Campanotus giganteum, the Nephile pilipes, the Prosopocoilus occipitalis, the Eupholus cuvieri, and the Pachyrhyncus orbifer! Wondering why I am suddenly scientific? For the sake of art, much like the Prada-Hirst purses, which contain insects that go by those names. There is the plexiglass shell, of course, rendering the insect-tastic handbags a fashionable twist. I’m not sure if that is twist enough though. But this next one sure is. The Prada Oasis is the perfect Prada-goes-to-the-desert store, built inside a bayat shaar, a traditional tent made of sheep hair even as intact, are the fashion house’s own aesthetics. It is decorated in sheep wool and velvet cushioning and Verner Panton sofas reproduced exclusively for Prada, besides, of course, the limited-edition collection. 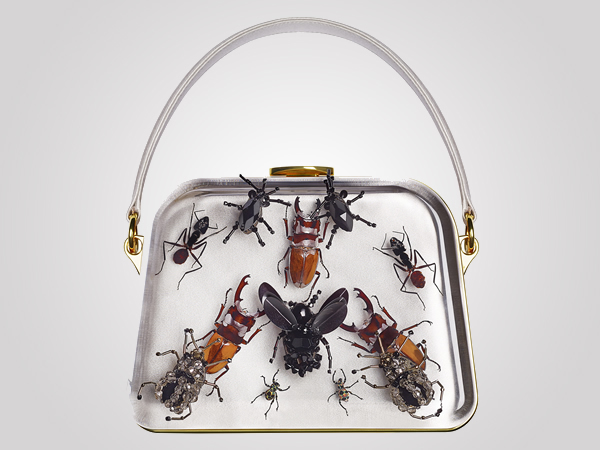 Damien Hirst’s Pharmacy Juice Bar, on the other arty hand, does decadent with modern day pharmacy designs based on the traditions of a Bedouin tent. Many themes from the original restaurant design have been included such as light boxes illustrating the four elements of earth, air, fire and water and two human skeletons. The tent fabric too has been printed with a pharmaceutical pattern, both on the interior and exterior. The tent exterior also gleams neon with the four colored carboys with the Pharmacy Juice Bar logo. QMA Director of Public Art, Jean Paul Engelen iterates, the initiative “sought to create an entirely unexpected, out-of-the-ordinary place, which, for just two days, provided a totally unique experience in the Arab landscape.” 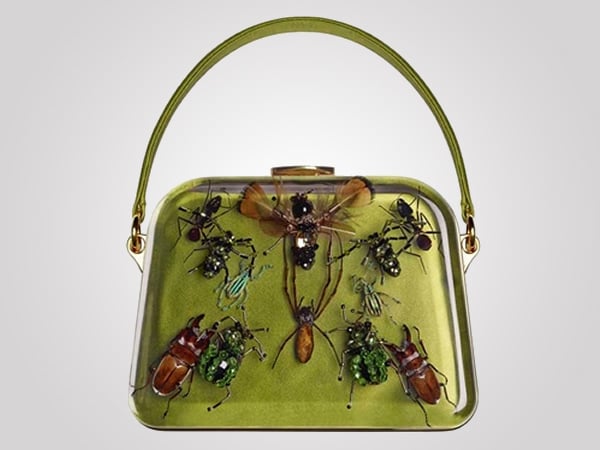 Available in only 20 pieces, the Entomology bags were sold on October 9 and 10 through a silent auction at Damien Hirst’s Pharmacy Juice Bar and the Prada Oasis. Proceeds from the sale will go to ROTA, Reach Out to Asia, a nonprofit organization headed by Her Excellency Sheikha Al Mayassa bint Hamad Al-Thani. 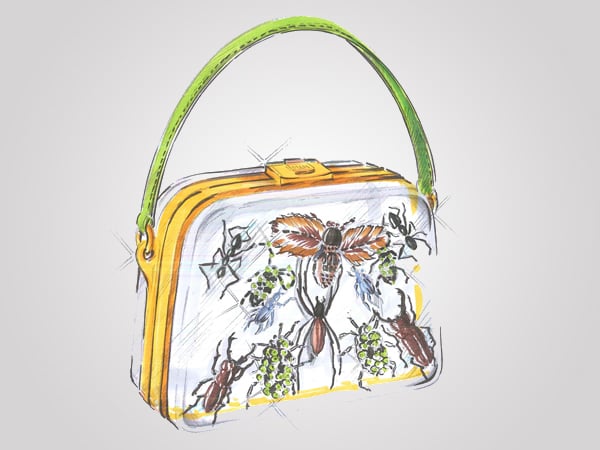 [Via – Vogue and Hauteliving and Independent]

Tags from the story
Damien-Hirst, Prada