There are shoes, sandals, boots, stilettos and then there are crocs. Since its inception in 2001 at the Fort Lauderdale Boat Show in Florida, the Canadian-manufactured’ boating shoe’ has become unanimous with comfort footwear pretty much like sneakers. The venture that sold a mere 200 pairs at that time of its launch has seen many ups and downs, been loved and hated (more loved for sure), has made groundbreaking fashion statements, and has since sold 300 million pairs of shoes in June 2020. If this isn’t a journey worth mapping then we don’t know what is.

The brand:
The ‘ugly shoe movement’ may have started with crocs, but two decades and countless fashion collaborations later, the brand stands tall, albeit with several holes. Interestingly, the brand initially targeted only sailors and kids, but they brilliantly carved out a niche for themselves over time through celebrity endorsements and collaborations. Their utility won hearts, and their strategies helped them win the fashionistas’ confidence. Owing to their wipe-clean, non-slip build, they have been spotted on professionals like nurses chefs, etc., where long-standing hours are involved. Today, the brand has more than 500 companies owned retail outlets and also has e-commerce websites. 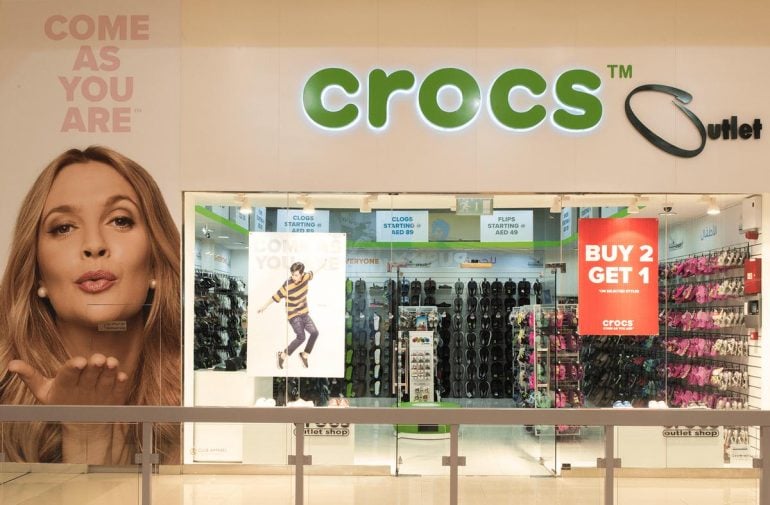 The theme:
The design of the shoes was acquired from a company named Foam Creations. It was developed as a boating shoe. The company has made the first model was called ‘The Beach’ and in 2002, at the Fort Lauderdale Boat Show in Florida, and sold 200 pairs produced at that time. In the early 2000s, Crocs gained massive popularity in the United States and Europe. It also declined just as fast in the second half of the 2000s. The glam decade of the 2000’s witnessed fashion critic Alexander Vasiliev call Crocs’ plastic hooves’. The indestructible clog couldn’t face the fashionable era in bright, easy-to-clean colors that appeal primarily to toddlers. Later, the brand’s assortment included fancier footwear for the cold season like rubber boots, both regular and warmed, as well as sandals lined with faux fur. They even gave crocs a glamorous makeover by introducing graceful sandals or ballet flats with a small heel with soles molded from Croslite and the top of bright or translucent silicone. 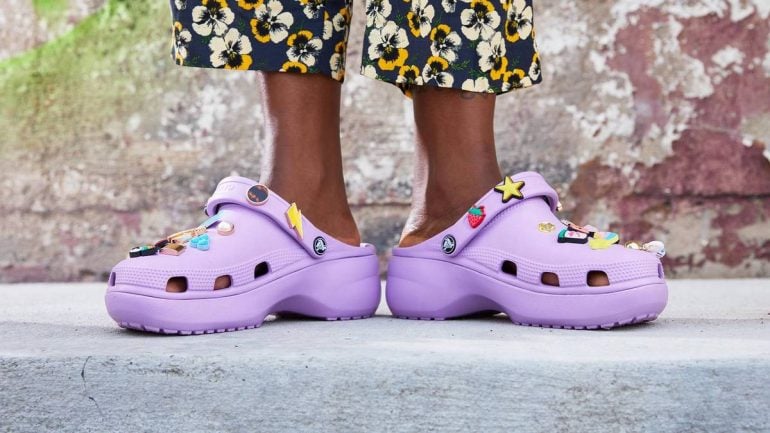 A significant turning point was the idea of personalizing clogs with so-called ‘Jibbitz’, ornaments made of rubber, and later of metal and crystals. This personalization which is fastened in the round holes of the shoe top like a button, took the world by storm. 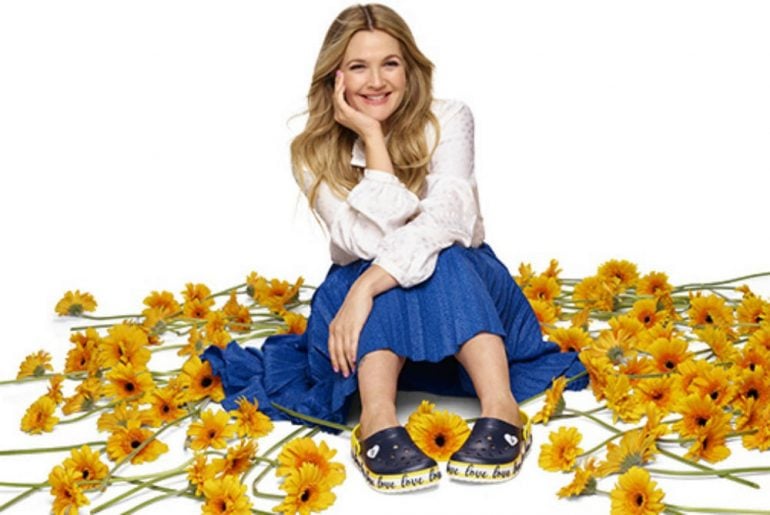 The fall:
The second half of the 2000s was particularly harsh for the brand. The company lost $185 million in 2008, which drew shareholder lawsuits and auditors who said Crocs might not pay off its debts. This led to tough calls like cutting jobs, closing stores, and, unfortunately, plummeting net income. 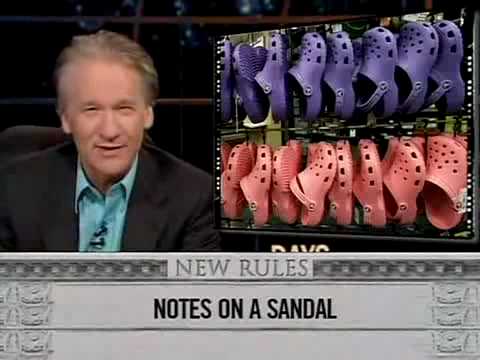 Around 75 to 100 of its 624 stores globally and lay off 183 employees out of more than 5,000. The copycat culture contributed heavily to the loss the company faced. Counterfeit croc-offs (a term coined from knock-offs) led the manufacturer to sue Walmart Inc., Hobby Lobby Stores Inc., and 19 other companies alleging trademark infringement related to the shoes.


The rise:
Three college friends who enjoyed sailing wanted to create a shoe that oozed comfort and, well, water too! From becoming a rage among nurses, chefs, sailors, and kids to well-known wearers such as former President George W. Bush and entertainers Jack Nicholson, Whoopi Goldberg, John Cena, Shia LaBeouf, Jennifer Garner, and Sacha Baron Cohen, Crocs have seen incredible fame. The Washington Post’s Jennifer Huget wrote, “They’ve spread like a vermin. Crocs’ story is the story of a viral success: born as waterproof, airy, and anti-smelling boat shoes spread almost through word-of-speech in a dimension that could not be further from that of fashion”. Crocs made a comeback around 2010 after John McCarvel was appointed CEO. He expanded the product portfolio by adding elements of elegance to the ungainly classic clog silhouettes. Crocs had finally regained their stance in the industry, with statistics showing searches for the brand had increased by 32% each month.
Crocs plans to use more sustainable ingredients for its products and packaging materials, with a goal to be a 100% vegan brand by the end of 2021. CEO Andrew Rees talks about the sustainability initiatives, “Crocs’ new sustainability initiatives meant to minimize the brand’s carbon footprint and impact on the environment was the natural next step in the effort to win over the younger, Gen Z explorer.” Crocs also touched hearts during the pandemic which changed the way the world perceived the brand. By giving away some 860,000 pairs of shoes to healthcare workers in the U.S. worth $40 million in retail value and $10 million in cost to the company the brand went from being goofy to outright heartwarming and right. Sam Poser, footwear analyst at Susquehanna Financial Group stated, “People who weren’t considering the brand a year and a half ago are now considering Crocs.”
The collaborations:
“You love us or hate us – and that’s OK because that means you’re paying attention to us,” said Michelle Poole, President, Crocs. One has to pay attention when Crocs are sported by so many of our favorite celebrities wearing them and team up with the brand for collaboration. The most celebrated partnership has to be with luxury brand Balenciaga where the gawky clog amalgamated with stilettos to give birth to a thing called fashion! Christopher Kane’s crystal-encrusted clogs made ugly acceptable. On being asked why did Kane pick this offbeat collaboration, he said, “Crocs are arguably the most comfortable shoe, I love that they are slightly awkward and might be perceived by some as ‘ugly’. They have a very naïve and childlike shape which I especially like when they look extra clunky on the foot.” And that’s the episode that made Crocs undeniably cool. Crocs did it again in Spring of 2020, collaborating with the historic British department store Liberty London for an ultra-fashionable iteration. 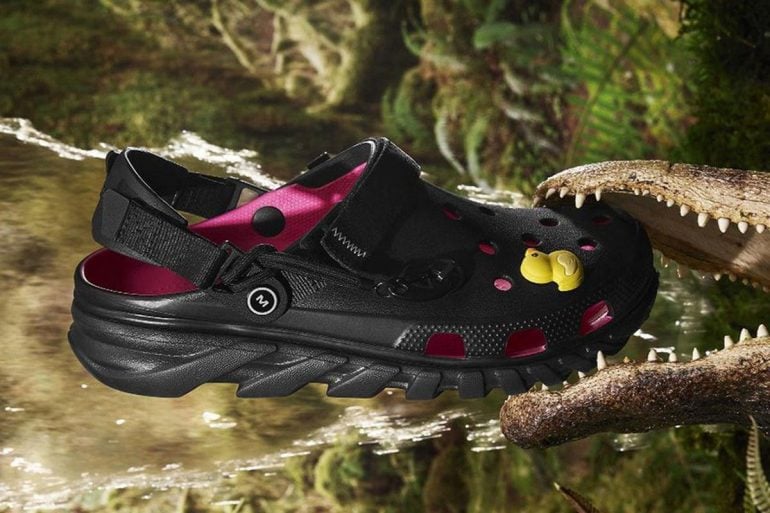 This series of clogs and slides came in three striking prints and a touch of elegance in the form of a silk scarf. While Streetwear brand Alife brought out the inbuilt-sock Croc and defied its wipe-clean solution, it also highlighted its versatility. Post Malone and Crocs have had multiple collaborations in the past few years. The fourth collaboration, however, between Post Malone and Crocs is the Crocs Duet Max Clog sold out within minutes of its drop. 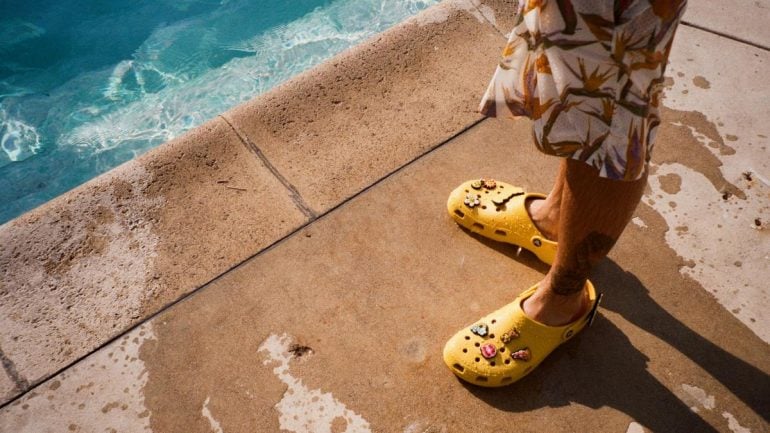 The brand’s latest stint is a Crocs x Justin Bieber collab, including attractive lavender Classic Clogs, logo on the backstrap, Jibbitz charm starring characters from drew house, Justin’s fashion label. Bieber said, “As an artist, it’s important that my creations stay true to myself and my style. I wear Crocs all the time, so designing my own pair came naturally. With these Crocs, I just focused on making something cool that I want to wear.” An impressive assemblage of collaborations has heavily contributed to making Crocs the cultural icon that the brand enjoys today to which Michelle Poole, Vice President of Global Product & Marketing at Crocs, told Highsnobiety, “Our clog serves as a blank canvas that can fuel the latest trends or conversations. This is why we think we’re becoming more relevant in the streetwear space.”


Celebs who swear by Crocs:
The list of croc-loving celebrities is long, but can you ever really get enough of Helen Mirren wearing Crocs on The Tonight Show? Nicki Minaj, in her typical style, bedazzled her pink Crocs with Chanel jewels! Even the royals Kate Middleton and Prince George contributed to making this fashion trend a best-seller. Celebrity chef Mario Batali is recognized worldwide for his work and his bright orange Crocs. On the “The Rachel Ray Show” the chef revealed that he ordered a “lifetime supply” of his beloved shoe when he discovered the brand planned to discontinue that specific color in the Classic mode. “Crocs and I had a long relationship, and they decided to discontinue this particular color — the one that has the light, refreshing airy holes,” he explained, holding up the shoe. “But we asked before they finished the run, for what we perceived to be a lifetime supply.” In the not-so-long list of celebs who don’t want to be seen dead in Crocs is Victoria Beckham. Justin Bieber acted boldly by sending her his lilac crocs, Beckham said she would rather die than wear the crocs.
The list includes Priyanka Chopra, Diplo, and so on. Priyanka said at the FNAA, “2020 has presented its fair share of challenges but I couldn’t be prouder to work with a values-driven organization like Crocs that embodies what it truly means, to come as you are. Come as you are is all about being comfortable with your true self in all that you do. In addition for advocating for inclusivity and self-expression, Crocs also stepped up in the face of adversity to deliver comfort at a time when it was needed the most.” Crocs sandals are most definitely having a moment and are more in vogue now than ever before.
The controversies:
Crocs were surrounded by a growing health care controversy wherein several hospitals began banning them. UK’s National Health Service had raised concerns about the protection the shoe offers its employees from sharp objects. For the same reason, Crocs-style clogs were forbidden in hospitals in the US, Sweden, Canada, and Austria. Crocs have always battled counterfeit problems, which led the company to sue brands like Skechers for copying patented designs. The same treatment was meted to a company called Dawgs that began manufacturing clogs using the same material and adventure strap. The only change they made was to make the holes square instead of round. Other than accidental risks, certain podiatrists echoed the logic that ‘Crocs are not suitable for all-day use and can lead to tendinitis, worsening toe deformities, nail problems, corns, and calluses.

All said and done, the feet of comfort-lovers have found a permanent home in Crocs, and that’s here to stay. Are fashionistas already hopping on the bandwagon they ignored all this time?