This year’s Black Friday has arrived, Christmas shopping season is officially on, and as the eager shoppers of the United States get ready for the mad dash to the nearest stores to grab the best deals, here’s something out of the Hammacher Schlemmer catalog that you’ll cherish all this holiday season. There are iPhone docks and then there’s this, a speaker unit. For iPhone and iPod, which is made from the exhaust manifold of a retired Formula One race car, now how awesome is that! Crafted in Modena, Italy, known as the world’s supercar capital and also the birthplace of Enzo Ferrari, the ‘iXoost’ dock looks like a work of art with its beautifully structured chrome tailpipes that once roared at the back of beastly formula one racecar.

It is constructed from the left or right manifolds of a retired eight-cylinder F1 engine from different racecars of different eras, including a 1978 Cosworth DFV, 2006 Renault RS26, 2007 Ferrari 056, and others. The dock is powered by a set of neodymium magnets, a couple of silk-dome, 70-watt tweeters, and two PPM-cone, 70-watt mid-range speakers each to deliver clear highs and mids, which are fitted into the openings of the manifold’s four head pipes. The end of the manifold’s collector tube houses a doped-paper cone 140-watt active subwoofer driven by a high-density flux ferrite that provides booming bass. The base, leather trim, hex screws, and corrosion-resistant 6082 anodized aluminum speaker cowlings come in a choice of six colors. But strangely, it features a 30-pin connector for older iPhones and iPods rather than the latest lightning connector. It’s available on the Hammacher website for $8,500. 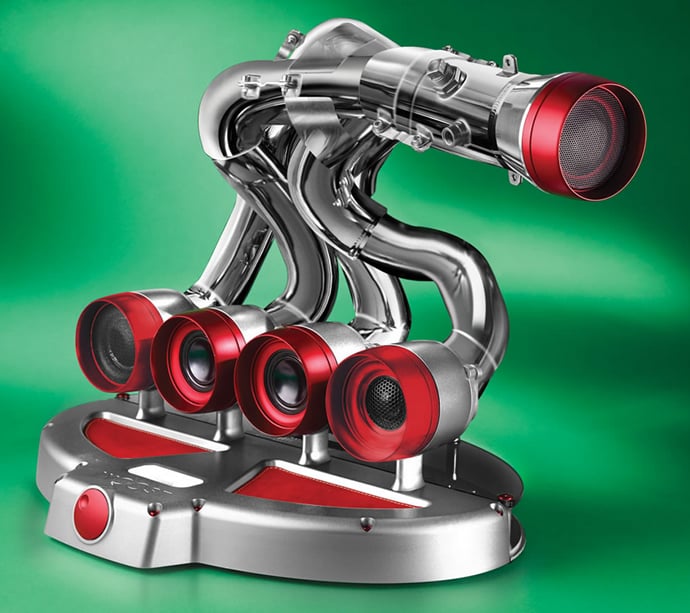