We featured America’s best and now it’s the turn of London bars next. Not an easy feat, let me tell you. With London’s Atrium Lounge taking the ‘World’s Best Designed Bar’ trophy this year, the British capital clearly has its bar design standards set pretty high. Sitting snugly within the trendy ME Hotel, the establishment is proof that not only have the British long broken their G&T barriers; they have done have done so in style. So without further ado, we plunge into the city’s spirit pool and secure the top five for best bar design. 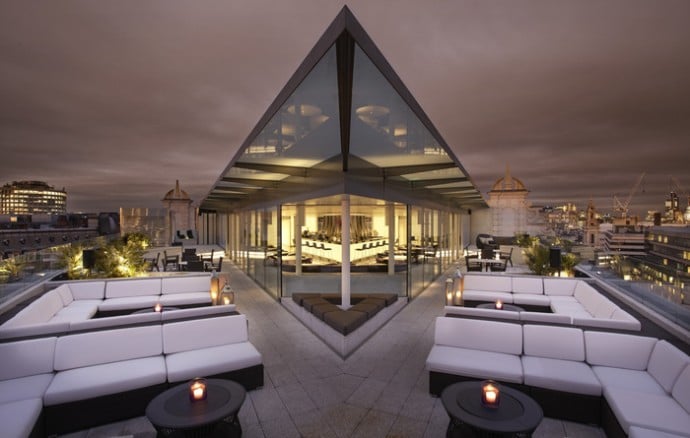 Another Melia entry (no surprise there) the place not only gives the tapas tradition a twist but does so with spectacular views. Located on the tenth floor and accessible from an exclusive express lift, it is the only rooftop bar, lounge, and terrace in The Strand and Aldwych area. It offers views of the London Eye, Trafalgar Square, Covent Garden, St. Paul’s Cathedral, and London Bridge. 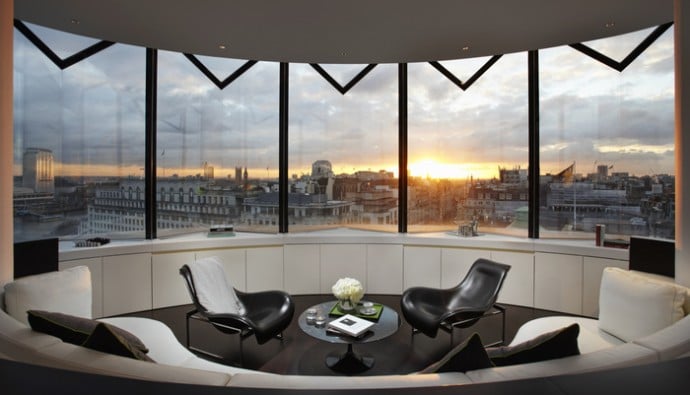 “The 5-star ME London is the first hotel in which the design of everything, from the shell of the building to the layout of the public spaces and guest rooms, down to the smallest details of the bathroom fittings, has been undertaken. By the Foster studio.” This has clearly resulted in a rarely seen symbiosis between the bold geometry of the hotel and the dynamic bar décor.
[Radio-Rooftop-Bar] 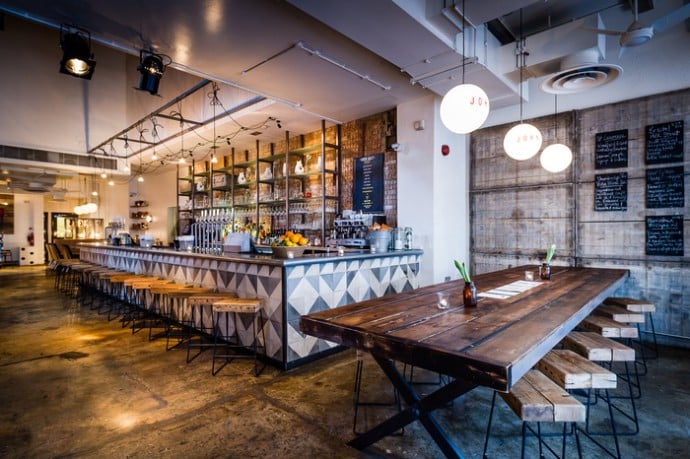 “A neighborhood bar with good beer,” proclaims John Salt about itself. But that’s all it’s willing to give. Until we probe further, that is. Besides its beer serving skills, the gastropub does laidback with its bare plywood and exposed brick. Located on Islington’s Upper Street, the King Mob product also combines chalkboards and gigantic display shelves to perfect its wooden revelry. 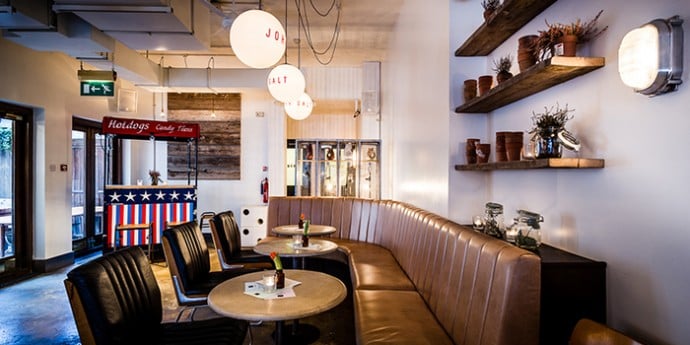 The casual bar-restaurant with its story dipped in controversy (read: runaway chef) won accolades for crisis management much as it does for its topography. Its tooth-rattling music meshes well with its spacious layout, large bar with its neat row of high stools and neutral cream, and dark brown color scheme.
[John-Salt] 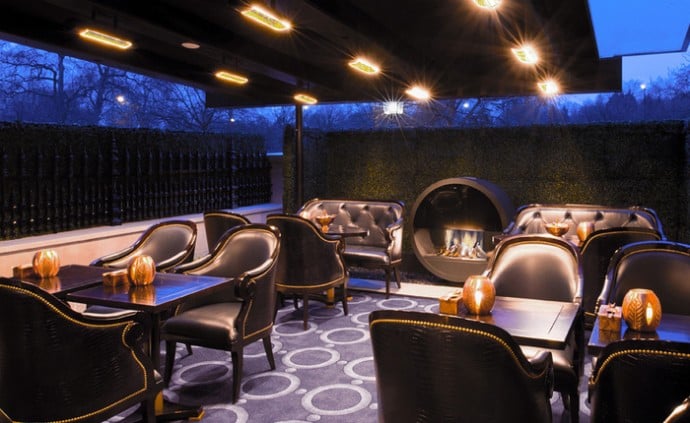 Authentic 1920s furniture and decorative features define the lavish Crystal Bar at London’s illustrious Wellesley property. Designed by Fox Linton Associates, the Crystal Bar is an outdoor-fireplace-fitted, roaring-heaters-lined, roofed-terrace treat. All mirrors, marble, and gilt, its interiors are perfect for a glamorous night about town with a round of expertly concocted drinks. 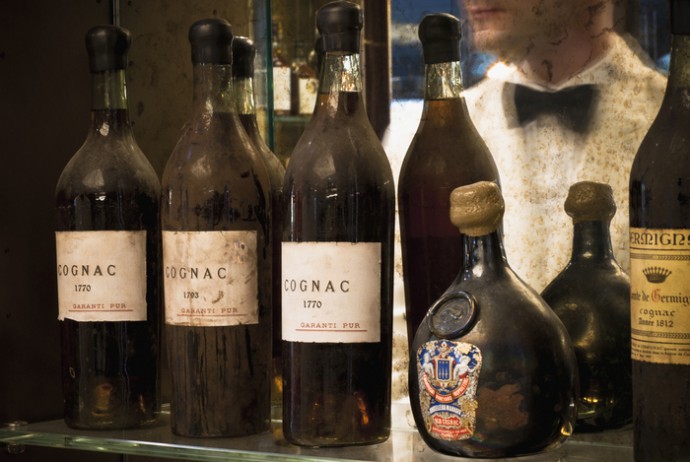 Besides its bejeweled bar, the chic establishment also houses a Cigar Terrace backed up with what is billed as the largest humidor in the country. Wafting of rich, chocolate-smelling tobacco hits, the setting showcases a wall of the finest Cognacs and whiskies.
[Crystal-Bar] 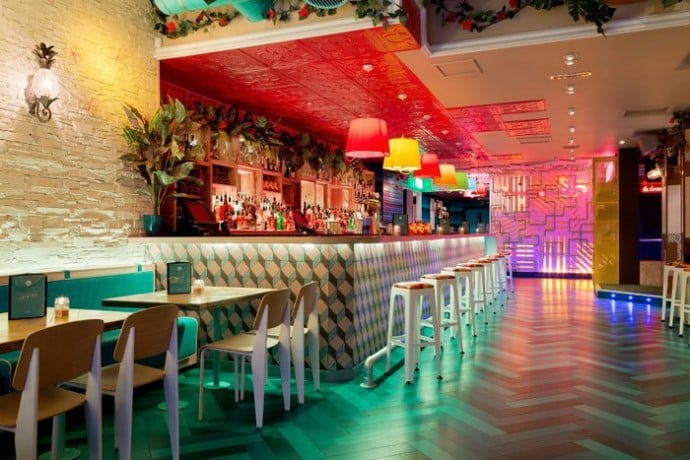 Two words: Big, colorful. Bright and floral! Ok, so two words won’t suffice when we talk about Barrio East. Located in the heart of London in the design triangle of Shoreditch, the place incorporates as much design as one would imagine. A vibrant, welcoming entrance and eclectic interiors await at this latest sibling to the Barrio brothers in Soho and Islington. 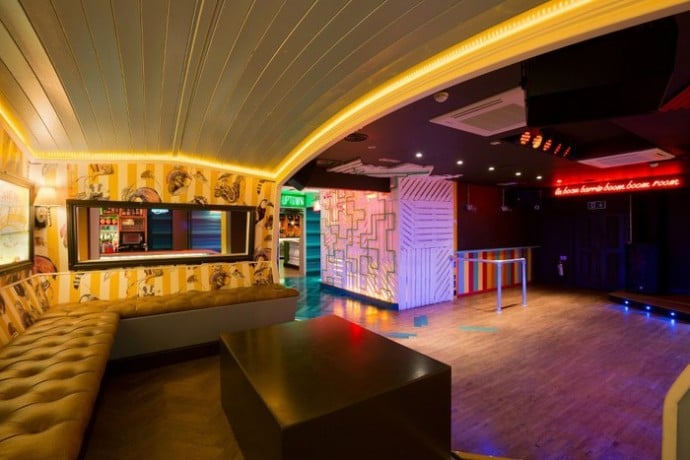 A work of dtwo design, this “bar” is separated into two spaces, ‘La Boca Barrio’ or the dance floor, complete with a converted 1960s caravan and the Cuban influenced ‘Timber Yard’ with booths constructed from painted planks of wood. Its “clash of Latin cultures” ethos shines beside the cuisine through the colorful tiles, imitation roses, and foliage.
[Barrio-East] 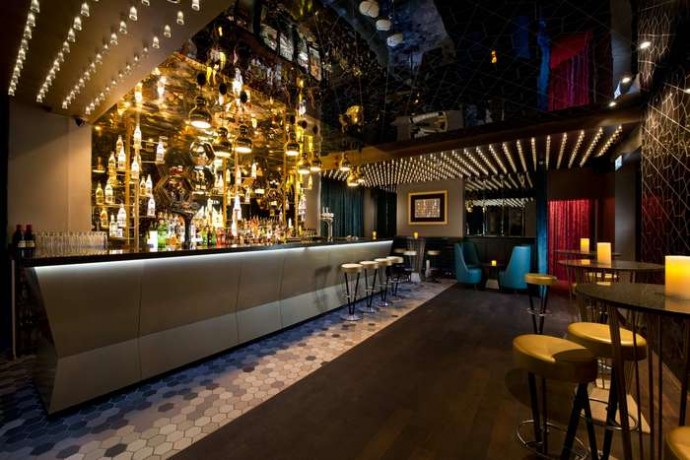 Golden Bee tempts the tipple loving with its top-class mixologists. But another temptation to meet the discerning drinker in here is the cast iron spiral staircase leading to a true oasis. Set atop London’s historic and eclectic Old street, the ravishing place with replete with rooftop houses a giant golden honeycomb for a bar and calls for relaxed entertaining enclosed by trees and comfy lounge seating. 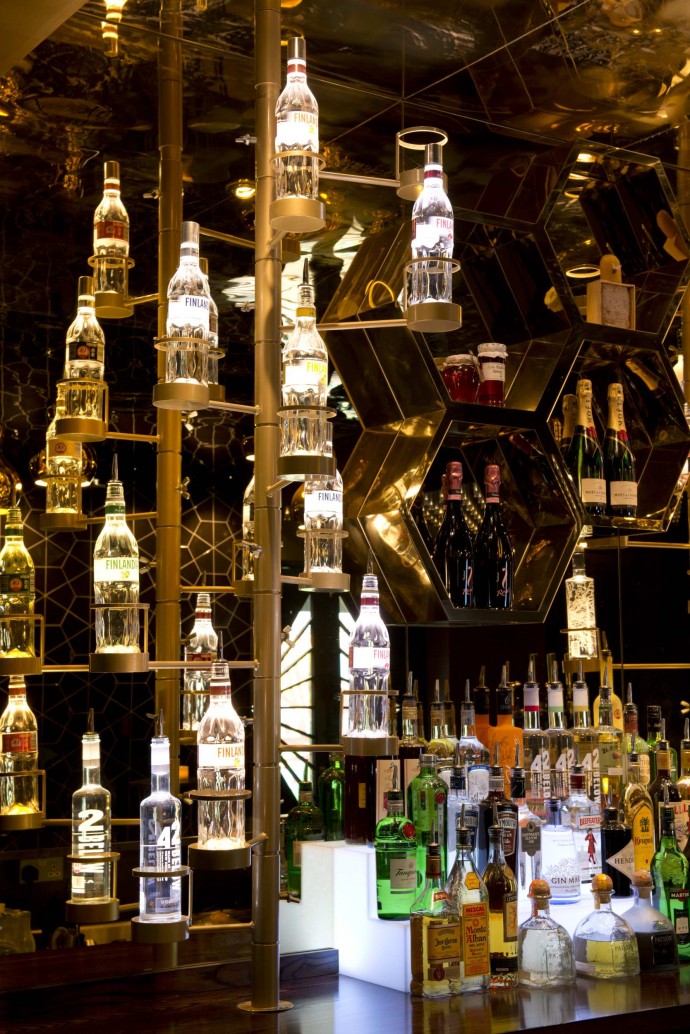 “Our roof terrace has a lovely warm ‘FirePit along with lots of heaters to keep the chill away.” So there’s the added element that instantly ups its design quotient. Clearly, the good people at Grapes Design knew how to tap into the mind of the audience. Touted “a glamorous alfresco escape” by Harper’s Bazaar, Golden Bee’s gold and turquoise color palette, velvet curtains, squishy stools, and glittering chain chandeliers add a heady doze of luxe to its darkly lavish ambiance.
[Golden-Bee]

Tags from the story
Bar, London