It’s legendary singer Frank Sinatra’s 100th birthday and to honor the occasion, the Jack Daniel Distillery has announced the nationwide release of its ultra-premium whiskey, the Jack Daniel’s Sinatra Century. This latest collaboration with the Sinatra Family is also in honor of Jack and Frank’s special friendship. Produced as a limited edition expression, only 100 barrels of Jack Daniel’s Sinatra Century are being made available in individually numbered bottles, making them as unique as the man who inspired it. 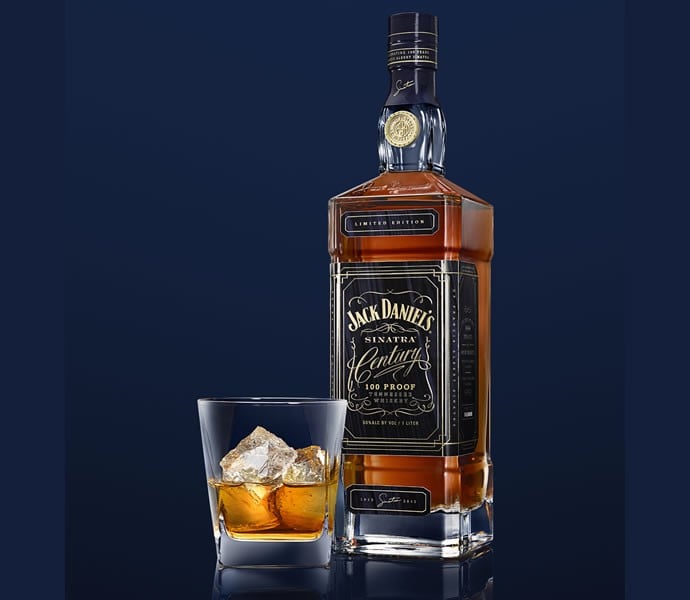 The relationship between Frank Sinatra and Jack Daniel’s is legendary and one that holds strong to this day. It is known that Sinatra was introduced to the Tennessee Whiskey by friend Jackie Gleason, and it quickly became his signature drink, often seen on a nearby stool on stage too.

Master Distiller Jeff Arnett who created Sinatra Century, picked a bold refined flavor from a selection of specially crafted barrels. “At the Jack Daniel’s Distillery in Lynchburg, we worked very hard to achieve a special flavor and aroma for Sinatra Century in order to give Frank a proper 100th birthday gift,” says Arnett. “This meant working with the people who knew him the most, his family, and honoring the legacy that he has shaped with our brand. We have created a product that we know the public will love just as much as Frank did.”

The premium whiskey, like all of Jack Daniel’s expressions, has been crafted using the same cave spring water from the Jack Daniel’s Hollow, proprietary yeast and charcoal-mellowing process that’s been used in the distillery’s nearly 150-year-old Tennessee Whiskey recipe. After that, the whiskey is poured into the specially selected “Sinatra” barrels, where it is exposed to extra layers of perfectly toasted oak through a grooving process only done at the Jack Daniel’s Cooperage. This allows the ultra-premium whiskey to get that pleasantly smoky and rich oak aroma that Sinatra was known to adore.

Prior to the Sinatra Century, at 100 proof, the distillery had also released the Jack Daniel Sinatra Select, a 90-proof premium Tennessee Whiskey – also with a bold, yet exceedingly smooth flavor, in 2013. The Sinatra Century will be available nationwide beginning early October 2015 and each exclusive bottle will be enclosed in a luxury gift box inspired by the legendary singer’s signature style. The set will also offer a selection of previously unreleased Sinatra tracks, entitled “Sinatra Live at the Sands in 1966”.

A 1-liter bottle of Sinatra Century will be priced at approximately $499.99.

Tags from the story
Limited-Edition, Whiskey