File this under “Too weird to be true”: a Swarovski crystal studded lavatory bowl has stolen the spotlight, attracting crowds of visitors at the China International Kitchen & Bathroom Expo 2015 in Shanghai on Wednesday. Yes, you read that right, a crystal studded toilet.

Created by Japanese jeweler Ginza Tanaka, for Lixil, a tiling and sanitary fixtures manufacturer, the lavish fixture is reportedly covered with a whopping 72,000 Swarovski crystals and comes with a steep price tag. Reportedly a saleslady at the event said the toilet is priced at CNY 388,000 which would be about US$62,548. The handcrafted loo supposedly took a month to make.

Despite the heavy dose of crystals, this loo is not the world’s all time most expensive toilet. That honor belonged to a solid gold seat that had to be melted down after the financial crash of 2008. 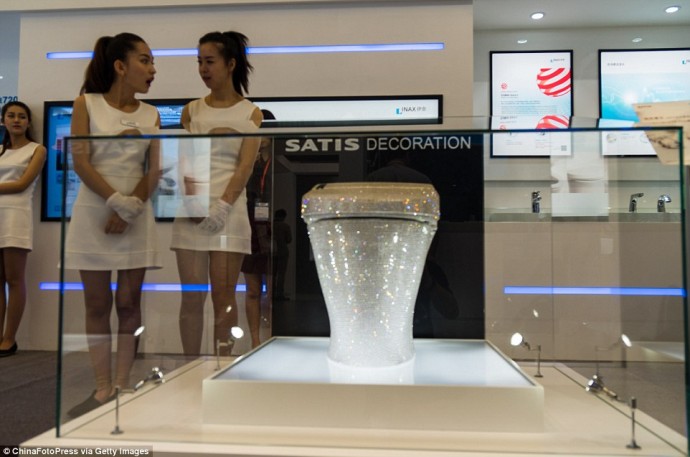 Now we’ve seen some really creative uses of crystals in our lifetime but this might be the most ridiculous. Lalique faucets, Baccarat fittings and Acquaviva Swarovski trimmings, we thought we had seen it all, but in the world of blinged out bathrooms, this is just the tip of the iceberg.

We would need to wear sunglasses in the lavatory to avoid being blinded by this eye wateringly sparkly loo.