Jewellery belonging to Britain’s late Princess Margaret, from a necklace she wore as a toddler to the tiara she wore at her wedding, drew crowds at Christie’s on Monday ahead of an auction of her personal collection. The sale features nearly 200 lots of royal jewels and more than 600 other lots of furniture, china, monogrammed silver boxes and decorative items. Christie’s said it expects the sale to bring in several million dollars, with the jewellery most likely to draw the greatest interest and eclipse pre-sale price estimates. Highlights include the Poltimore Tiara, which she wore at Westminster Abbey in the first televised royal wedding in 1960. Estimated at $260,000 to $350,000, the diamond-laden piece from 1870 can be reconfigured to be worn as a necklace or as individual brooches, which the princess did throughout her life. 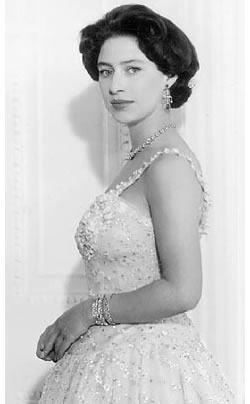 A necklace of 34 diamonds totaling about 85 carats, worn by Queen Mary at her son King George VI’s coronation, is expected to fetch $350,000 to $520,000. The necklace is one of many gifts in the sale from Queen Mary to her granddaughter. Others include a sapphire and diamond brooch to mark the princess’ confirmation day accompanied by a handwritten note “from her loving Granny.” Helen Molesworth, Christie’s jewellery specialist who coordinated the sale said she anticipated the actual sale prices would be several times higher than the estimates, given the “historical and sentimental interest” in many of the items. The sale is being conducted by Margaret’s children to offset Britain’s steep death or estate taxes.
Source