Look what just sprung up at Legoland Japan this season! A Cherry Blossom that promises to keep you awestruck for days, not merely for its beauty but for the fact that it is assembled purely out of Lego Blocks! Yup, that’s correct! The gigantic 7348-pound tree is made entirely from LEGO bricks, thus earning a Guinness World Record for being the largest LEGO cherry blossom tree there ever was! 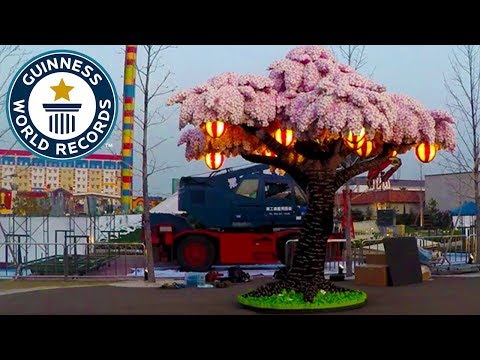 The structure is built just in time for the upcoming Sakura season in the country, while also marking the one-year anniversary of LEGOLAND Japan. The awe-inspiring structure is built by a team of experts at the LEGO factory in the Czech Republic who spent nearly 6700 hours to put in place 881,470 plastic blocks around metal support pipes. The final parts were then shipped to Nagoya, Japan, where they were assembled for the final display. Apart from the branches, flowers and the bark, the lanterns (which are beautifully lit up at night) around the tree are also made purely out of LEGO bricks.


LEGOLAND has also created other gigantic structures such as 12-foot high Ferris Wheel as well as the 911 Turbo at the Porsche Museum in the past. However, it’s the pretty pink Lego Cherry Blossom that is stealing the limelight for now. The Lego Sakura sensation will be up on display until May 6, post which you can could do with gazing at some real Cherry Buds on bloom!

Tags from the story
Japan, Lego