When we think of the richest people in the world, names like Elon Musk, Jeff Bezos, Bill Gates and Gautam Adani might spring to mind.

Of course, these are based on the most recent net worth figures, and can fluctuate at any given moment.
Think further back and some more famous names such as American business magnates John D. Rockefeller, Cornelius Vanderbilt, Henry Ford and the Russian Imperial Romanov family also had toppling fortunes.
But what if we were to really go back in time and tell you that the richest person of all time (while factoring in inflation) beat not just today’s tech billionaires and shipping magnates of the industrial era, but also the world’s greatest rulers – Augustus Caesar (US$6 trillion), William the Conqueror (US$5 billion) and Akbar I (incalculable), per The Times of India?
According to historians, the richest person ever to walk the earth was a man named Mansa Musa, a 14th century West African ruler, whose wealth was simply “indescribable” and “incomprehensible”, per the BBC.

So who was he exactly, and why may you not have heard of him?


Mansa Musa was the sultan of the Mali Empire
In Mandinka, “Mansa” means sultan or emperor. It was recorded that Musa Keita was born around 1280 CE during the Keita Dynasty, per BBC.

He was born into a family of rulers and came into power in 1312 CE when his brother Mansa Abu-Bakr abdicated the throne to go on an extravagant expedition at sea. According to historian Shibab al-Umari, Abu-Bakr had always been fascinated with the Atlantic Ocean, and reportedly left with a fleet of about 2,000 ships with thousands of men, women and slaves – but he never returned.

Mansa Musa became the ninth sultan of the West African kingdom, which was already considered very wealthy by the time he ascended.


His kingdom was rich in salt, gold and land
Historians estimate that the Mali Empire was at that point the largest gold producer in the world, owning more than half the world’s total supply, according to the British Museum.

With Musa on the throne, the kingdom only continued to expand phenomenally, thanks to his work in expanding trade in the region. His wealth continued to skyrocket from mining significant salt and gold deposits, as well as trading elephant ivory, as stated by National Geographic.


It wasn’t just the salt and gold that contributed to Musa’s riches though. Under his rule, the kingdom grew immensely, stretching over 3,000km (1,864 miles) from the Atlantic Ocean to modern-day Niger, annexing over 24 cities, including Timbuktu. It was reported that he had never lost a battle and, in many cases, territories joined the Mali Empire willingly due to the higher quality of life.
He made the most extravagant pilgrimage of all time
As a devout Muslim, Musa began his voyage to Mecca from 1324-1325, which is now referred to as the “most extravagant pilgrimage in human history”, according to Magnates Media.
Musa had a vision to get his name out to the world, and this 6,500km desert pilgrimage was the perfect opportunity to do so. BBC reported that the king left Mali with about 60,000 men and women, from royal officials to camel drivers and slaves.

It was reported that much of these travellers were decked in head-to-toe Persian silk and gold brocade – including the slaves. The camels – about 100 of them – meanwhile, carried bags of pure gold. 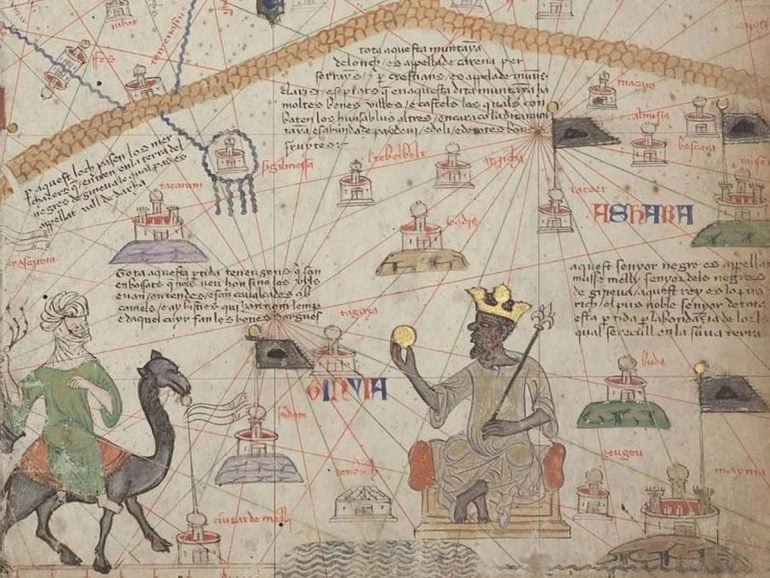 How else did he splash his gold?
The journey took Musa and his companions through the Sahara desert and Egypt, reaching Cairo, where the emperor would generously splash his cash – or gold, in this case – in the capital. He spent so much gold that he destabilised the local economy and caused mass inflation for 10 years after his departure.


Mansa Musa’s legacy …
Upon his return, Musa made it his mission to revitalise the cities in his kingdom. Thanks to his architectural developments in the region, his reputation continued to flourish. He worked with Islamic scholars, including direct descendants of Prophet Muhammad and an Andalusian poet and architect by the name of Abu Es Haq es Saheli, and paid them up to 200kg in gold for their efforts.
He also built schools, libraries and mosques and helped Timbuktu become an epicentre for culture and education, per the BBC.

Musa died in 1337 at age 57 and was succeeded by his sons, but eventually the empire fell apart.


So how rich was he, really?
Some estimates put Mansa’s modern day net worth at US$400 billion to US$500 billion, though it can be difficult to fairly calculate a fortune based on gold, salt and land. Many historians, however, agree that his wealth was “richer than anyone could describe”.
Nevertheless, Mansa Musa will be remembered not just for his mountains of gold, but also for his generosity and commitment to his Islamic faith, promotion of education and financing his empire’s greatest cultural developments.

Tags from the story
Billionaires, History