Roman Abramovich’s $600 million Solaris is among the biggest yachts in the world. The luxury vessel stole all spotlight when the Chelsea FC owner made it to UK’s sanctions list. However, ever since the 460-footer docked in the Turkish tourist resort of Bodrum, it hasn’t made waves, pun intended. ESysman SuperYachts, a YouTube channel, shared an update on the massive motoryacht that flaunts 48 cabins across eight cascading decks. Reportedly, the vessel that has remained docked in Bodrum for nearly four months is exhibiting its AIS (automatic identification system) as Anchorage, Alaska.

The chances of Abramovich sailing his beloved pleasure craft to this destination are improbable unless it’s a prank or simply an error. It’s utterly illogical for the sanctioned Russian oligarch to sail his massive boat nearly 11,000 nautical miles away to Anchorage, where it may get impounded or become another Amadea.


Solaris boasts a top speed of 18kn, and even if the ship diligently cruised, this trip would take no less than 25 days (per our calculation on sea route and distance calculator, Port); to what avail? If Abramovich has been following the cases of Amadea and Axioma, it is lesson enough for him to avoid unnecessary risks and stay put.
On its way to Turkey, the $75 million superyacht of Russian billionaire and oil magnate Dmitry Pumpyansky was impounded in March. The vessel took a detour to Gibraltor, which was a risk considering its owner was already on the sanctions list. On reaching Gibraltar, Axioma was immediately boarded by officials, and the rest is history. Amadea, too was making a trans-Pacific voyage when it entered Fiji sans customs clearance and suffered a fate too dramatic even for a $325 million megayacht.
Abramovich has been dodging officials and saving his superyachts Solaris and Eclipse for months. With the United States Department of Justice trialing the oligarch to seize his assets, including yachts and jets, he surely knows better. As per the yacht tracking website Marine Traffic, motoryacht Solaris is at anchor on the Aegean Sea.
The US is set to seize Roman Abramovich’s prized private jets
For far too long, the world has remained focused on Roman Abramovich’s megayachts Solaris and Eclipse worth $1.3 billion combined. The tycoon owns many other possessions beyond the luxury pleasure crafts, namely a Gulfstream G650ER and a Boeing 787 Dreamliner, believed to be the most expensive private aircraft in the world. A federal judge in New York signed a warrant authorizing the seizure of the jets for violating US export and sanctions laws. 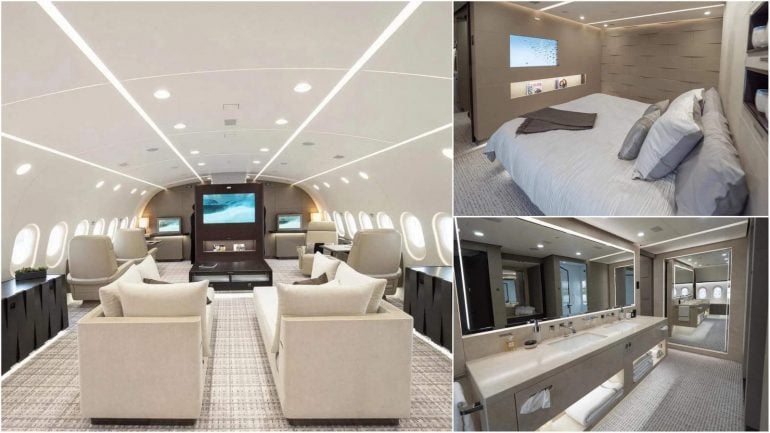 The $400 million Boeing 787 Dreamliner can accommodate 50 passengers and flaunts a dining room that can seat 30. The smaller Gulfstream G650 boasts a 53-foot cabin making it the biggest in its class, which can be configured in different ways to fit anywhere between 11 to 18 passengers. The billionaire used this private jet to fly sushi from London to Azerbaijan, a fast-food takeaway that cost no less than $55,000.


Time will tell if the Solaris even left the safe waters of Turkey, but in all probability, it does seem that the Russian billionaire is just trolling the US authorities for the last laugh.
Tags from the story
Billionaires, Roman-Abramovich, Superyacht