When it comes to the pinnacle of quality, we’d see Montblanc sitting right at the top! And in proving so yet again, the marquee has unveiled the latest from the Patron of Art Limited Edition – a couple edition paying tribute to the lives and legacy of British monarchs Victoria and Albert. 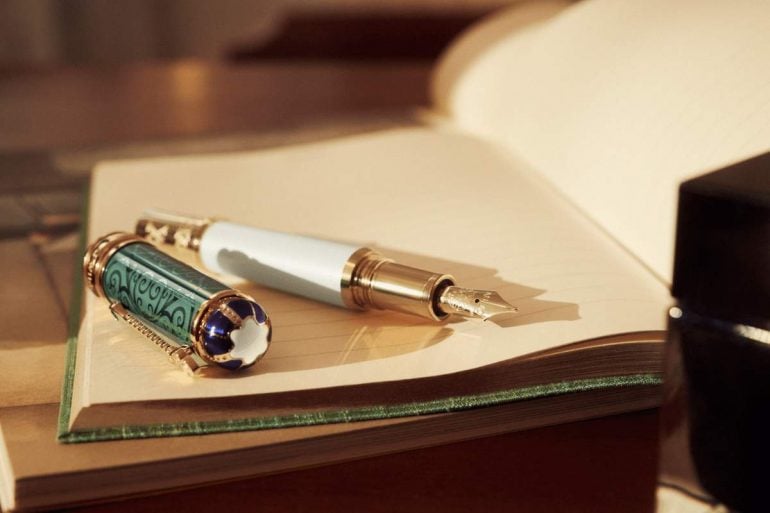 Marking the 30th and final edition of the series, the collection carefully picks on pieces of Victoria’s journey from princess to one of the most powerful rulers of the time and Albert’s journey from young prince to Prince Consort. These are reflected in unique features of the writing instruments, such as the engravements of Victoria’s crown and scepter and some of Albert’s greatest cultural achievements. 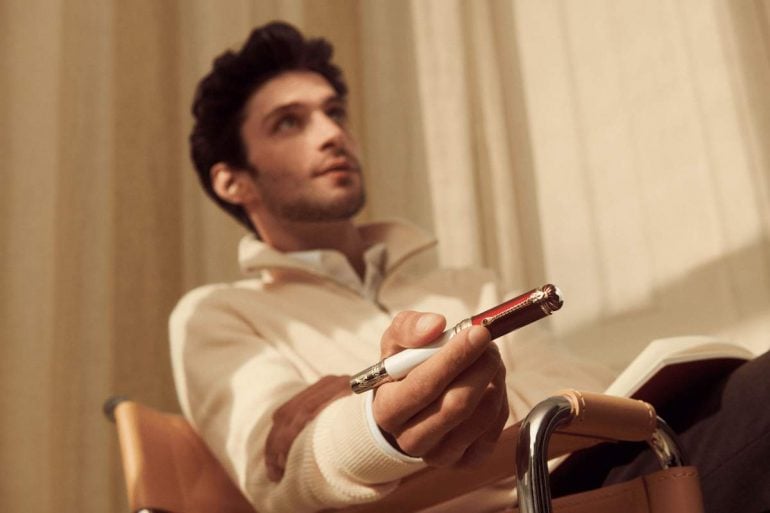 In paying homage to their eternal love, Montblanc has stamped each of the pieces with the initials V&A and has also used Victoria’s engagement ring as a reference for their design. Since the reigning couple ruled not just an empire but a whole era, the collection is that many times special. 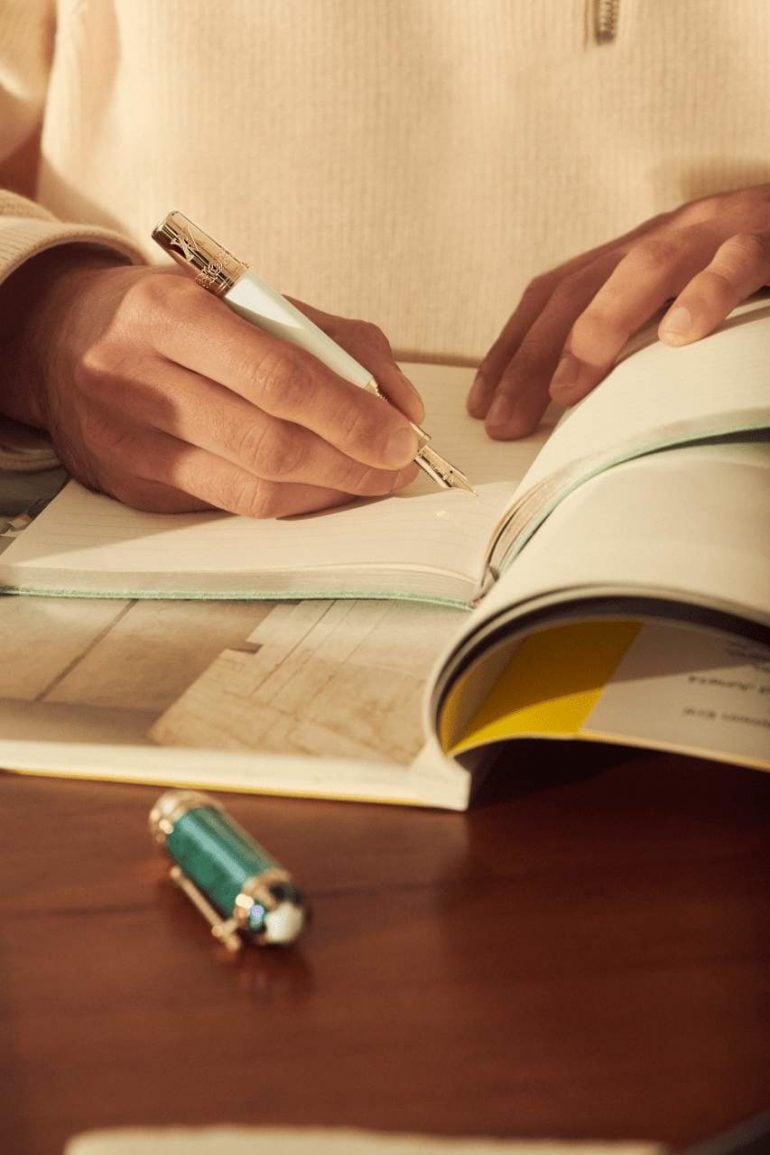 Consisting of two 4810 and two 888 editions (where one is honoring Victoria and one Albert) and one LE100 and another LE8 edition, here’s a detailed look at the 30th Montblanc Patron of Art Limited Edition collection: 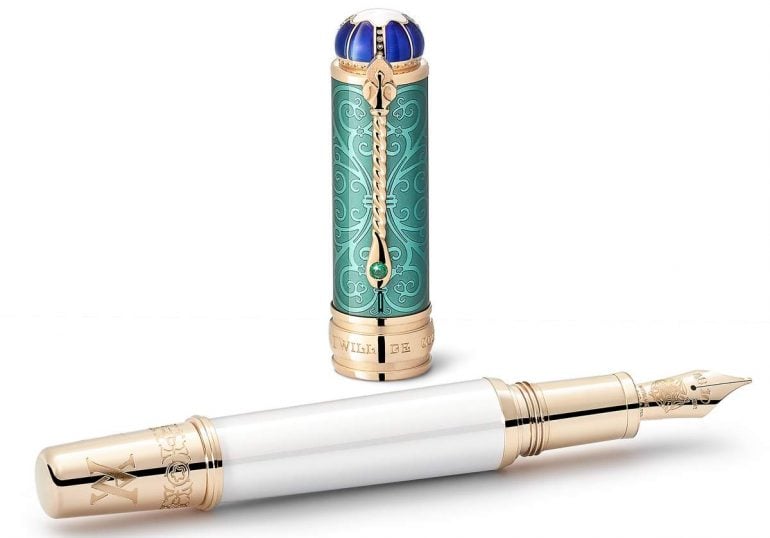 Montblanc Patron of Art Homage to Victoria & Albert Limited Edition 4810 ( Victoria Edition):
Inspired by the early years of the imperial couple, the 4810 features a barrel in pearl-white lacquer to symbolize purity and youth. It also comes with a cone embellished with a traditional Victorian pattern as well as the initials “V&A.”

The piece comes with a cap in translucent mint-green lacquer, which was Victoria’s favorite color to wear. There’s also a reference to the fence surrounding the Albert Memorial in Kensington Gardens, London, which can be seen in the design beneath the lacquer of the cap. 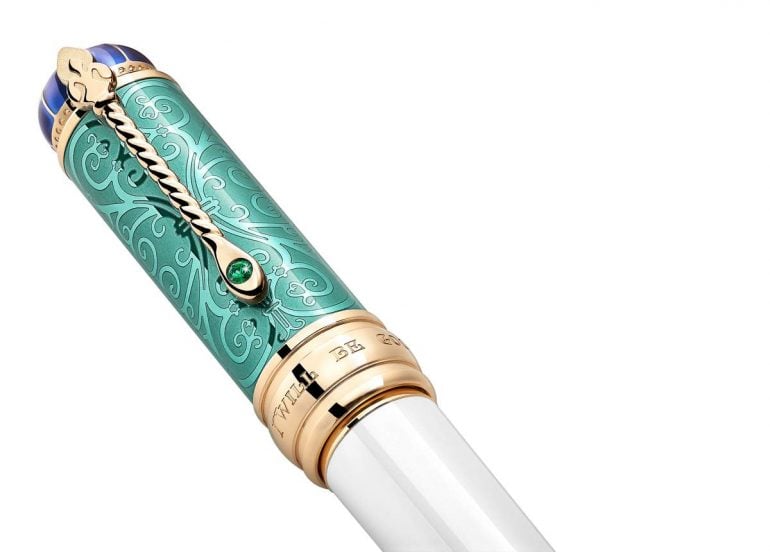 Other features include a royal blue crown on the cap, the words ‚ ‘I will be good ‘engraved on the ring, and a handcrafted Au 750 solid gold, champagne-toned gold-coated nib enamored with a rose in honor of ‘England’s Rose’ – Queen Victoria. 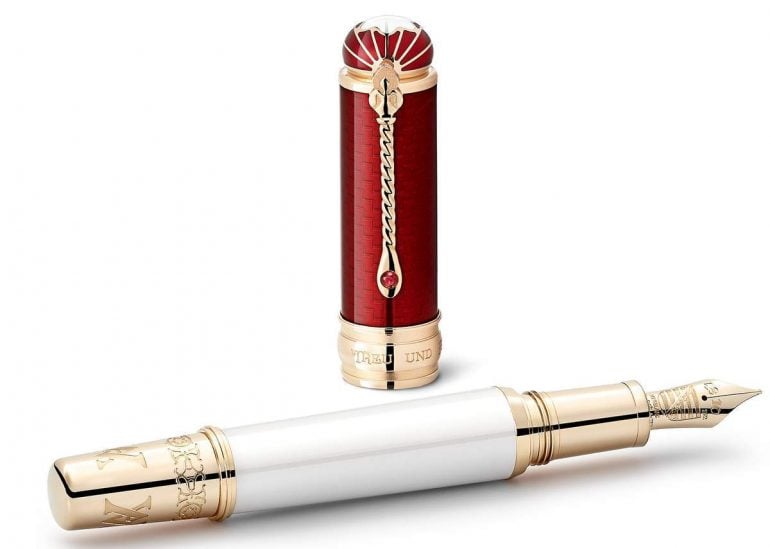 Montblanc Patron of Art Homage to Victoria & Albert Limited Edition 4810 (Albert Edition):
In addition to certain shared features, the Albert-inspired 4810 edition comes with a burgundy-colored translucent lacquer on the cap inspired by the British Field Marshal uniform worn at his wedding. It bears a geometric, stepped-shaped decoration inspired by a neogothic stepped gable of Schloss Rosenau, which was Albert’s childhood home.

It comes with the inscription of the motto – “faithful and firm” on the cap ring. Other features include the dome-inspired cap shape, a scepter-shaped clip with a red stone, and the coat of arms of Saxony engraved on the handcrafted Au 750 solid gold, champagne-toned gold-coated nib. 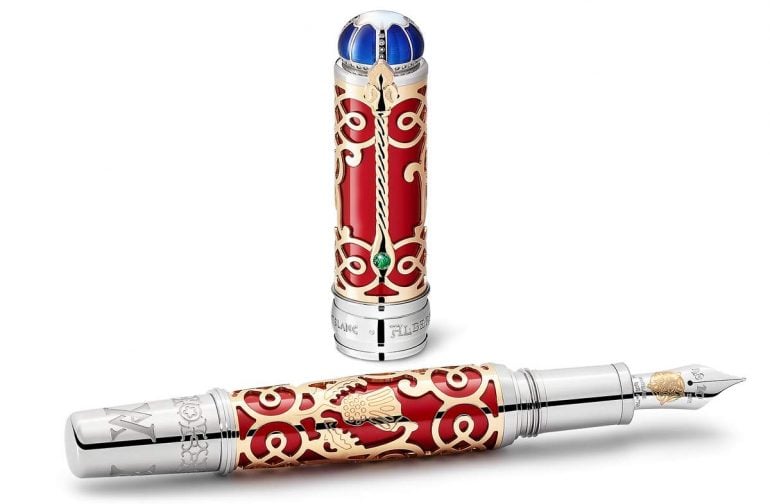 Montblanc Patron of Art Homage to Victoria & Albert Limited Edition 888 (Victoria Edition):
Designed to celebrate Victoria’s accession to the throne, the 888 comes with a cap and barrel made of translucent red lacquer inspired by Victoria’s coronation dress and an Au 750 solid champagne-toned gold overlay depicting the monarch’s monogram. 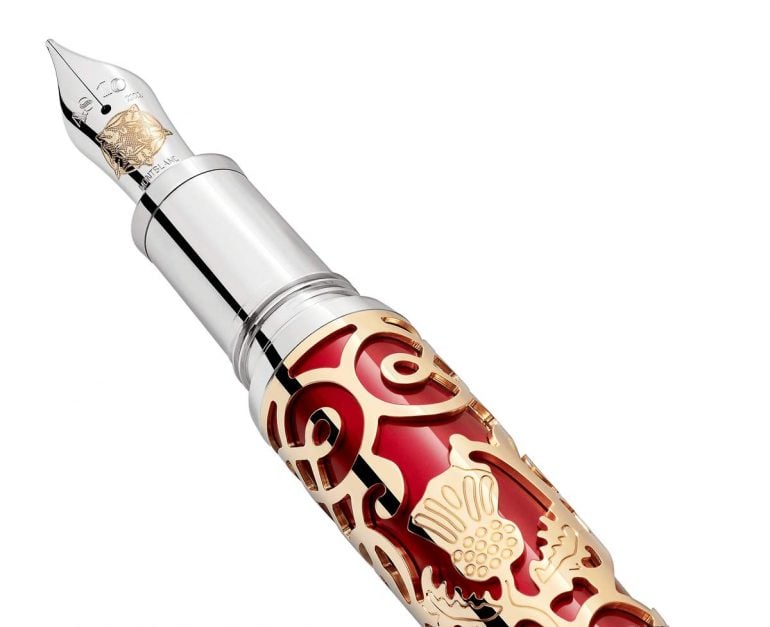 The design of the fountain pen also features elements from her coronation collar and dress representing her three major kingdoms, along with a royal-blue crown handcrafted Au 750 solid gold nib, which is also decorated with the English Rose.

The pen’s scepter-shaped clip is further decorated with a red garnet, while the cap ring is engraved with the names of the couple and their wedding date ( with the cone bearing the initials “V&A”). 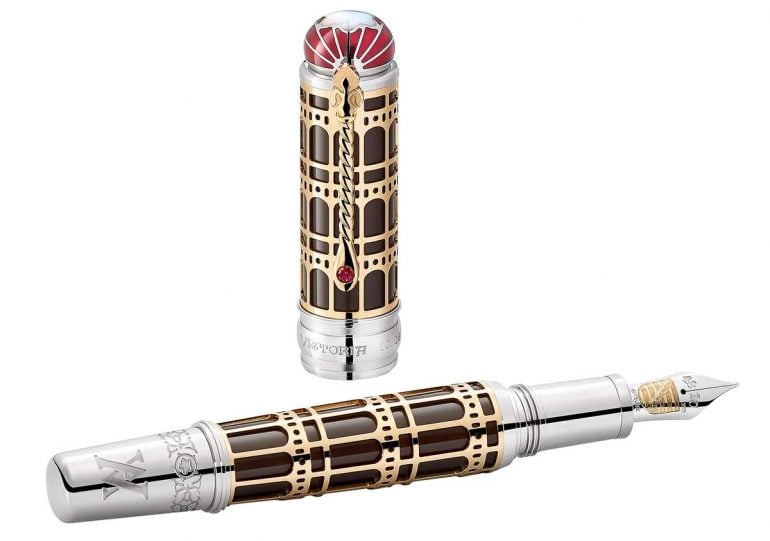 Montblanc Patron of Art Homage to Victoria & Albert Limited Edition 888 (Victoria Edition):
The 888 honoring Albert features a cap and barrel with an Au 750 solid champagne-toned gold overlay that is inspired by the architecture of the Crystal Palace. It further comes with a grey translucent lacquer underneath that pays homage to the tartan that Albert designed himself for Balmoral Castle in Scotland. 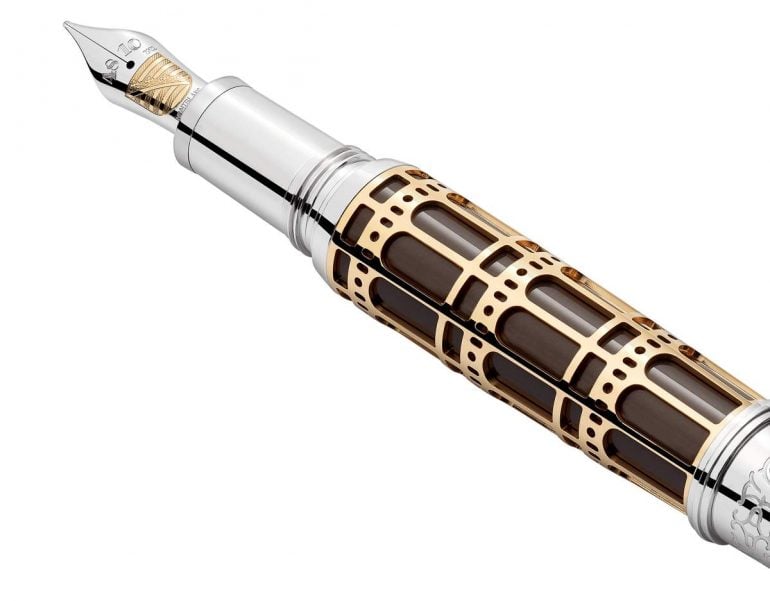 The handcrafted solid gold nib, partly rhodium-coated and party champagne-tone gold-coated is decorated with the coat of arms of Saxony, while the top shape of the cap top also bears architectural references inspired by the dome of the Crystal Palace. 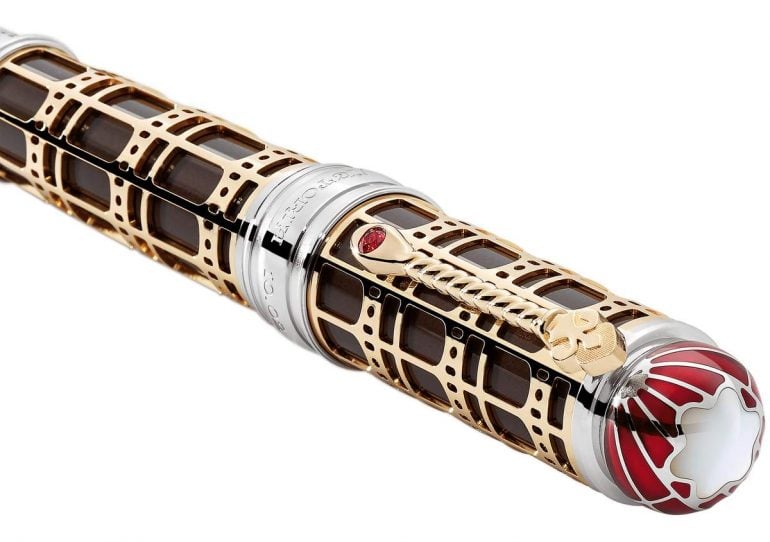 Much like its counterpart, this one too comes with the cap ring engraved with the names of the couple and their wedding date ( with the cone bearing the initials “V&A”). 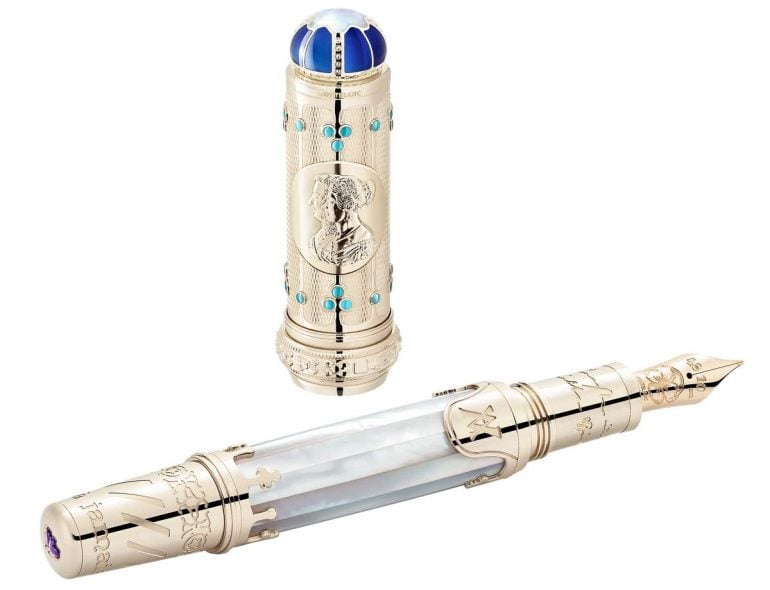 Montblanc Patron of Art Homage to Victoria & Albert Limited Edition 100:
Brought in to celebrate their romantic love and their shared passion for art (with a mother-of-pearl barrel combined with Au 750 solid champagne-toned gold fittings inspired by the colors of Victoria’s wedding dress), the limited edition 100 is a masterpiece. It bears references to the couple’s nine children, traditional design found in the bedroom in Kensington Palace where Princess Victoria grew up in several of its aesthetics. 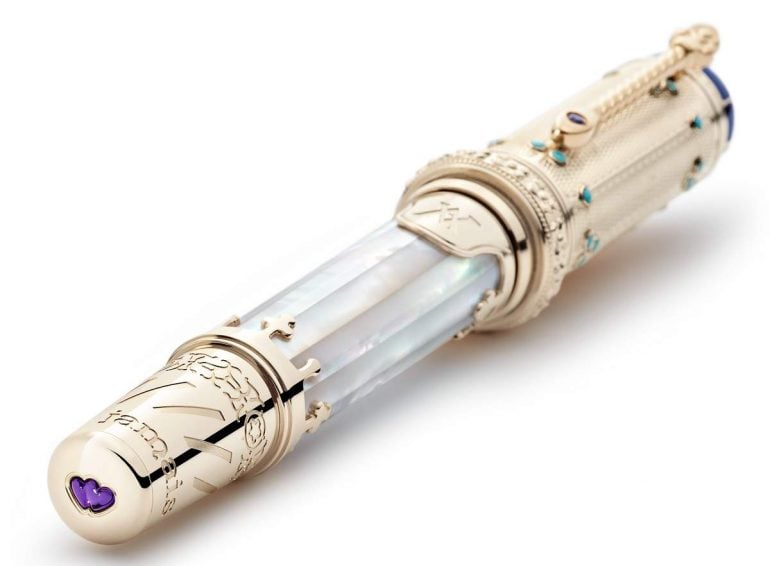 The instrument features “Unis à jamais,” or ‘united forever,’ engraved on it, along with the intertwined-hearts-shaped amethyst set in the cone. It is completed with a handcrafted Au 750 solid gold, champagne-tone gold-coated nib that comes with a “pansy representing loving thoughts. ”

Other features include an orange blossom pattern is modeled out of the Au 750 solid champagne-tone gold detachable cap ring, a blue sapphire at the end of the clip, the cap is decorated with a guilloche, hand-engraved double profiles of Victoria and Albert inserted in the cap, and a crown in royal blue lacquer in the cap top set with the Montblanc emblem in mother-of-pearl. 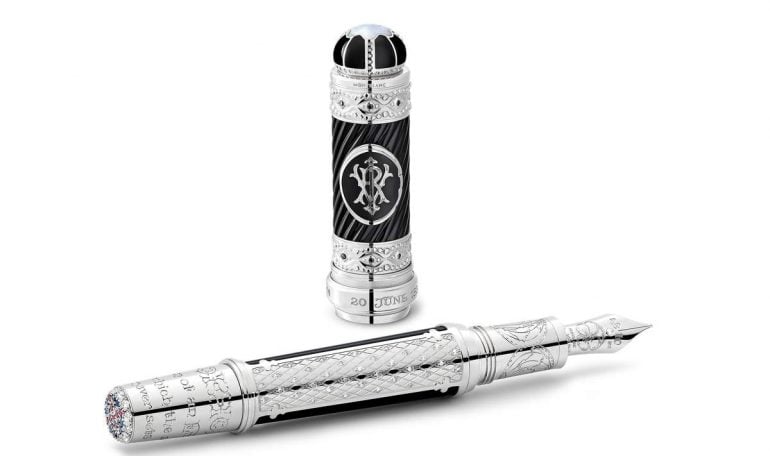 Montblanc Patron of Art Homage to Victoria & Albert Limited Edition 8:
Taking us through the period of grief in Victoria’s later life after Albert’s death, the Limited Edition 8 features a cap is made of black onyx with an Au 750 solid white gold inlay. It opens to unveil a hand engraving from a memorial locket she wore in the memory of Albert. Further, the instrument comes with an Au 750 solid white gold, rhodium-coated barrel decorated with brilliant-cut diamonds, and two black onyx inlays.

The inscription on the pen’s cone reads “Queen of an Empire on which the sun never set” and features a design inspired by the bedroom in Kensington Palace where Princess Victoria grew up. The cone’s end is set with sapphires, rubies, and diamonds.

The Au 750 solid white gold, rhodium-coated forepart bears a hand-engraving of a world map showing the British Empire under Victoria, while the small crown placed on the Queen’s coffin is recreated in black lacquer in the cap top and combined with the Montblanc emblem in mother-of-pearl. Lastly, the detachable cap ring is engraved with the dates of her reign: 20 June 1837-22 January 1901, to honor her long service.

Montblanc’s Patron of Art Homage to Victoria & Albert Limited Edition is currently available at the brand’s boutiques as well as online. Care to invest in some regal goodness?

Shocking! Balenciaga being Balenciaga is selling destroyed sneakers for $1,850 a pair.

A Gen-Z heartthrob and a very successful influencer, TikToker Charly Jordan has bought a luxurious…