There are some marriages in which people swear to a union till death does them apart, and then there are some in which death plays a role even in separation! Marriages are made in heaven, but bitter divorces are made on Planet Earth and boy! Can they get entertaining? It is rightly said, “Heaven has no rage like love to hatred turned, nor Hell a fury like a woman scorned” The divorce that made the most news was that of Melinda and Bill Gates, but it was an example of suavity and composure. No matter what was brewing behind closed doors, the world didn’t get to partake in the action (or the lack of it). Then there was an explosive, packed-with-drama episode starring Tatiana Akhmedova, Russian Oligarch Farkhad Akhmedova, and their 27-year-old Temur Akhmedov in a supporting role. After chasing an unpaid $600-million divorce settlement for four tedious years, Tatiana hired former SBS operatives to seize the $320 million superyachts amid the battle.

I admit to never expecting anyone coming even close to Tatiana’s exhibit of rage, but it doesn’t ruffle my feathers to admit I was wrong. In a first-of-its-kind incident, an ex-wife raided a firm run by her husband and stole the bodies and brains of wealthy Brits and Americans. It is not a mortuary if that’s what youre thinking; it is a cryogenic facility KrioRus run by 41-year-old Danila Medvedev along with his ambitious (read: ferocious) wife, 59-year-old Valeria Udalova. KrioRus is the couple’s labor of love, a dream they nurtured together and raised to succeed. Akin to couples fighting over the custody of their children, KrioRus is at the center of conflict between Valeria and Danila, both of whom claim to be the rightful keepers of the firm. To take the bones and brains that belonged to her, Valeria roped in her team at KrioRus to raid the company, which is now Russia’s leading cryo-storage facility.
The scorned woman opened giant tanks containing liquid nitrogen to capture the preserved bodies along with a couple of detached brains, loaded them on trucks, and fled the scene. About Cryonics it is a scientifically based, legal technology for preserving humans and animals in a state of deep cooling in the hope that they will be resurrected in the future. Medvedev, who started a new family with another woman, was left shocked after the incident as not only was he at a loss, but the integrity of the frozen corpses, pets, and brains that owners wanted to bring back to life in the future, would be questioned. 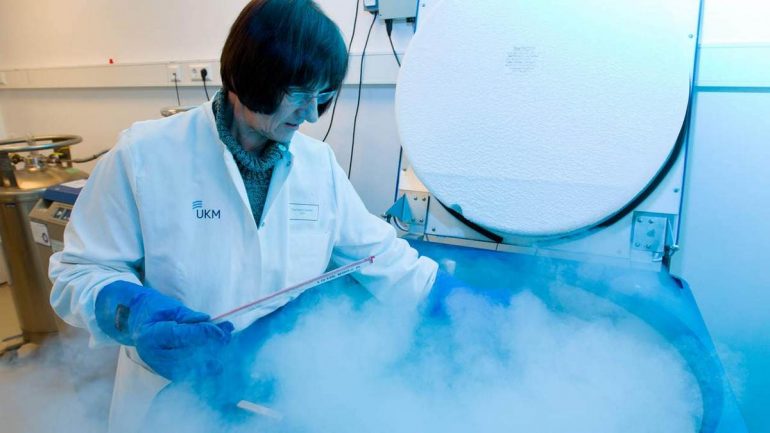 Aleksey Potapov, an expert with KrioRus, told DailyMail, ‘There was a risk of damage; it is impossible to transport dewars in a horizontal position. While attempting to steal our dewars, this nitrogen was spilled, most of the nitrogen was poured onto the ground.’ Udalova stated this was her way of getting back at the culprits after she was unfairly ousted from a company that’s the fruit of her hard work. Only a fool would easily give up the company with orders pouring in from several countries, especially from pet owners.


According to Dailymail, Udalova stated, ‘There are many orders from different countries, especially dog and cat owners. This is the reason why Medvedev wanted to take KrioRus for himself.’ The technology is gaining momentum in Russia and many parts of the world, and it doesn’t come cheap. Wired.com revealed KrioRus charges $36,000 to cryonize a body or half that for just the head. Five hundred people have signed up with KrioRus for cryopreservation. So far the company has cryopreserved 81 people and 47 pets. What is scarier for you? The concept of cryopreservation or being in the middle of a death-laden divorce?
Tags from the story
Russia