For those of us who keep remarking on the raw, unadulterated beauty of the yesteryears – here’s a reality check for you. While the new age Instagram users receive massive flak for the over-use of filters and photography tools to ‘look good’, the tradition seems to have its feet back in the Victorian era.

A 22-minute video has recently surfaced online, which offers an eye-opening look at this continuous relationship between societal beauty standards and reality. The clip shows YouTube star, dress historian, and costume interpreter Bernadette Banner narrating how ‘facetuning’ to achieve aesthetic appeal dates back to the Victorian era.

She remarks how retouching with the beauty standards of that period in mind — was applied to both commercial and personal photographs. And it wasn’t only famous people whose photos were retouched. Many regular women in the old photos also appear to have their waists slimmed down and faces touched up too.

In the video, Bernadette also mentions how before photography, people were pained or drawn, so these were definitely not fully realistic images of them. In the 19th and early 20th centuries, people would take a photo very rarely, maybe even only once in a lifetime. As a viewer, we’d only see such photos occasionally.

She further explores the relationship between fashion, beauty, and marketing in the clip while drawing comparisons with today’s conversations and culture. Here’s a look at the full video: 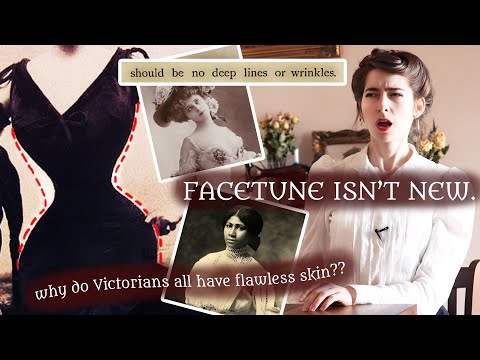