Qatari royals eat, breathe, and thrive in the lap of luxury. As far as their maids and servants are concerned, an Upper East Side $41 million New York mansion should do just fine! The sale occurred in January 2017 in an off-market deal to the anonymous 12e73rd LLC. The property was purchased from billionaire Andrew Farkas, the founder of the real estate bank Island Capital Group. 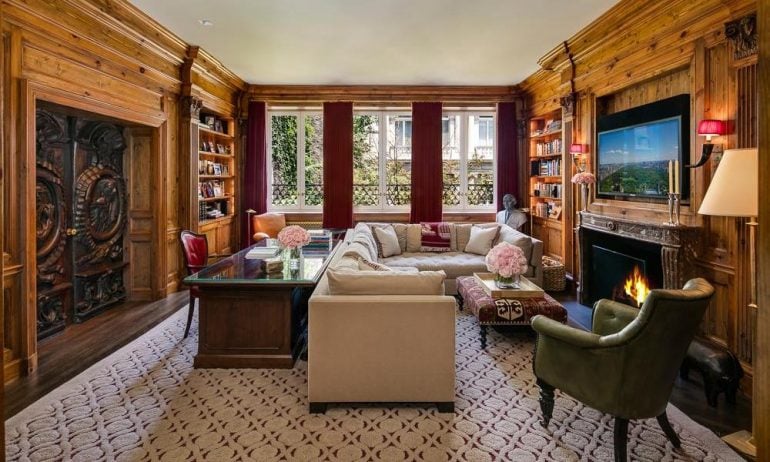 A definite palace-of-sorts for us lesser mortals, the 10,400-square-foot home of loyal Qatari servants was a beauty renovated by Daniel Romualdez (the genius behind extraordinary homes of Diane von Furstenberg, Vito Schnabel, and Tory Burch).


The gorgeous limestone mansion was designed initially by Henry Allan Jacobs and occupied one of Manhattan’s most desired townhouse blocks. The property was completed with a 500 sqft south-facing garden, a terrace off the master bedroom, and a landscaped roof terrace with a kitchen spanning another 922 sqft.
Keeping in mind the large entourages of royals, the house with five bedrooms, five luxurious renovated full bathrooms, three powder rooms, and nine working fireplaces should’ve sufficed.
No doubt, the staff of royalty is also accustomed to the niceties and opulence that is ultimately their workplace. Hence, it only makes sense that their accommodation also includes imposing ceilings; a grand living room, formal dining room, bar/club room, library, eat-in kitchen, gym, massage room, and playroom.
It is a home worth a whopping $41 million; nothing less should do.
Bottomless pits of the wealth of the Al Thani family:
The billionaire businessmen of the world have nothing on the Qatari Al-Thani royals, which are easily worth more than Bill Gates and Elon Musk combined. House of Thani is worth a whopping $335 billion net wealth, a massive number but very believable once you glimpse the extravagant palace (read: residence) in Doha. Sheathed in secrecy, the royal residence reveals tall arches, manicured lawns, and well-appointed exteriors, indicative of the luxuries beneath.
As they live, they also move in style. Sheikh Khalifa bin Hamad bin Khalifa Al Thani one of the members of the royal family and a prominent art collector, has some of the most sought after supercars in his garage. The 31-year-old also takes his prized set of wheels wherever he goes. He was recently spotted driving the $6 million Bugatti Divo in London. The car was sent to London City along with his Lamborghini Sian FKP 37 and Ferrari Monza SP2.
Similarly, the Emir’s daughter Al-Mayassa bint Hamad bin Khalifa Al-Thani has an unbeatable penchant for art and owns the world’s most extensive collections with a whopping 6,300 pieces.
The only thing that can steal the limelight from their significant collection of supercars and artworks is the $400 million superyacht Katara. Considered one of the world’s most lavish luxury vessels, the ship features a helicopter deck, satellite domes, tenders, and jet skis. The floating palace accommodates nearly 35 guests and 90 crew members. Katara flaunts a beach club, multiple gyms, a beauty salon, and several pools.
Tags from the story
Billionaires, New-York, Qatar