A meal at Akira Back is more like a learning experience, where Grey Goose gluggers (ahem) can learn the nuances of sipping sake, whilst relishing saucy ‘land’ and ‘sea’ preparations hot off the robata grill. But that’s not the only reason why. The eponymous restaurant at JW Marriott, Aerocity in New Delhi (also home to the massive K3 where we brunched) is the perfect example of contemporary culture. The reason why I say ‘culture’ and not just ‘cuisine’ has answers that probably trace back to the chef’s upbringing. So, here’s tracing.

One of Las Vegas’ most beloved chefs, Back was born and raised in Seoul, Korea but ended up in Aspen, Colorado, thus beginning his baseball career. While that in no way explains how he turned chef, it does clear the mystery behind the Tuna Pizza and Akira’s Tacos on the menu of a famously Japanese-Korean establishment. And speaking of the latter that also happened to be the first of our orders, it was a succulent sweet-savory chicken version. From the menu’s ‘Hot Shared’ section, the crispy, shell encased beginning was probably one of the best, most innovative ways to enjoy a meaty filling. 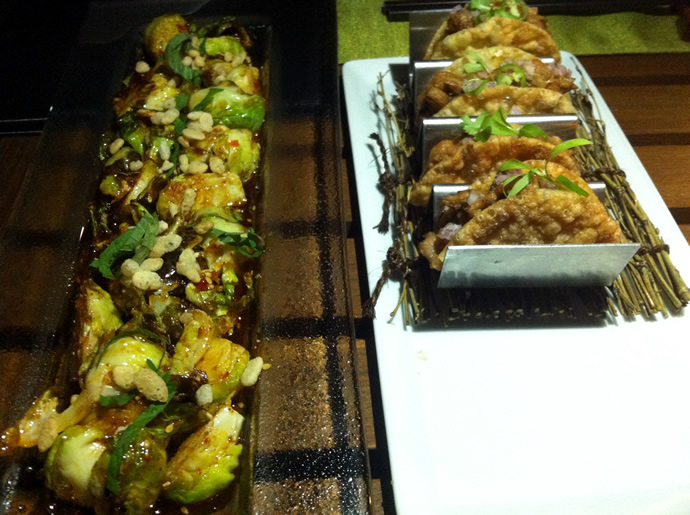 The Fried Brussels Sprouts was just as much of a marvel. I know. You must be thinking- Brussels sprouts? That’s what I thought but upon our lovely server’s recommendation, I decided to take the plunge, into what I didn’t know to be a marvelous pool of Chili Citrus Vinaigrette. Didn’t I just tell you about innovation? What stayed with me for a long time though was the bowl of Edamame with Maldon Sea Salt. And not just for the beautiful buttery flavor but because plucking each bead from the pod was slightly cumbersome. 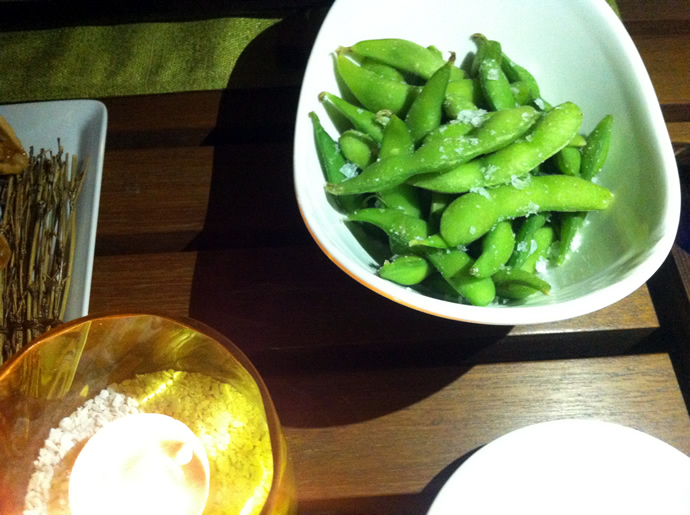 Then again, despite the notion, Akira Back isn’t your average poncey restaurant; here the emphasis is truly on a multi layered gastronomic experience. So, pluck away as I did, ending up with a pile of deflated conquests to send back to the kitchen. At this point, I must mention my Honjozo. I may know a wee bit about wines, having been an Italia-ficionado for years but when it comes to sake, the recommended carafe of Karakuchi was exactly what I needed, light, mildly fragrant, easy to drink. My mood for experimentation in no way reflects any lack of wine options, however. 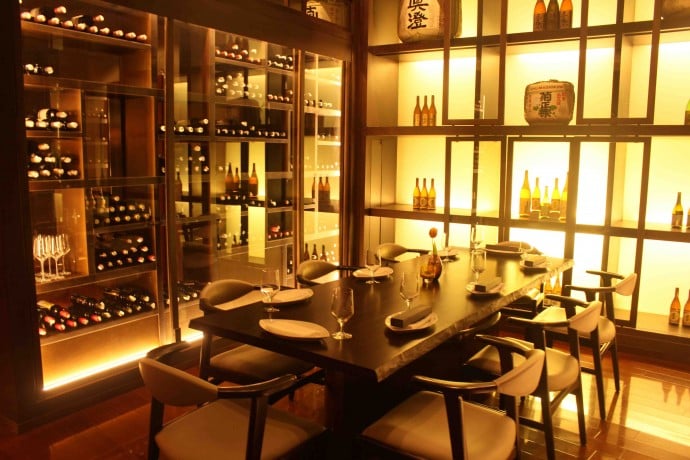 But besides the extensive wine list, ‘The Reserve Collection’ from the menu could make quite the center of an indulgent dinner. Still, as I veered toward the obvious sushi section, I selected the Kona Sun and my friend picked a Light Tini with sake, lemongrass, green tea, ginger and elderflower. As you can guess, even mine was much the continuation to the former carafe and comprised, besides the obvious, freshly squeezed pineapple juice, lime juice, papaya and pineapple chutney. Now while I’ve always known lime to work a tantalizing magic in cocktails, the papaya and pineapple chutney addition was quite the homerunner. 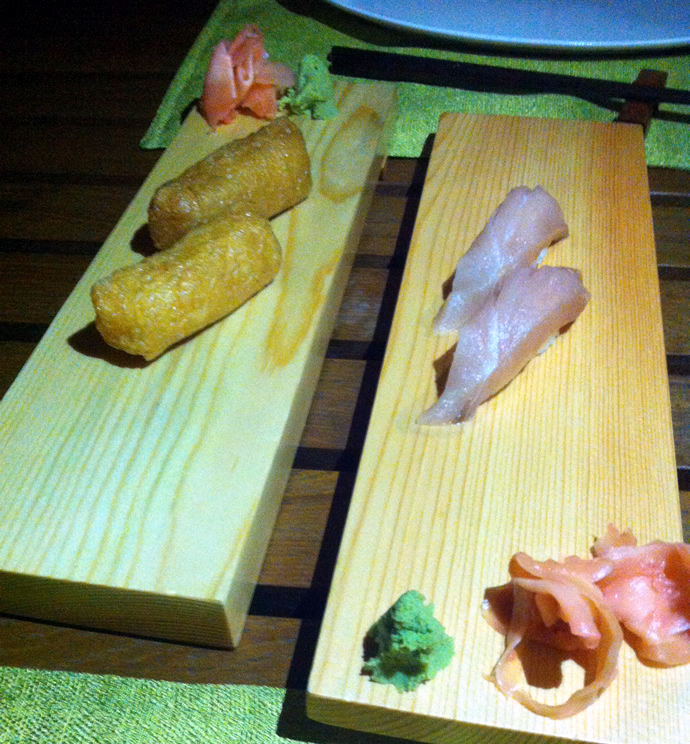 What else hit a home run was the Yellowtail sushi or the Hamachi Su. Or at least that’s what my fellow diner exclaimed but since I so conveniently passed over the two-piece per order sensation, I was left with my own two of the Inari Su. Made with sticky rice and sweet tofu, the sugary preparation begs for balance, more than your average drizzle of soy sauce can promise. Anyway, from his recent success at the food table, my friend confidently called for a portion of one of the signature rolls, Red Dragon. What arrived was a gorgeous parade of shrimp tempura, crab and spicy tuna along with eel sauce. 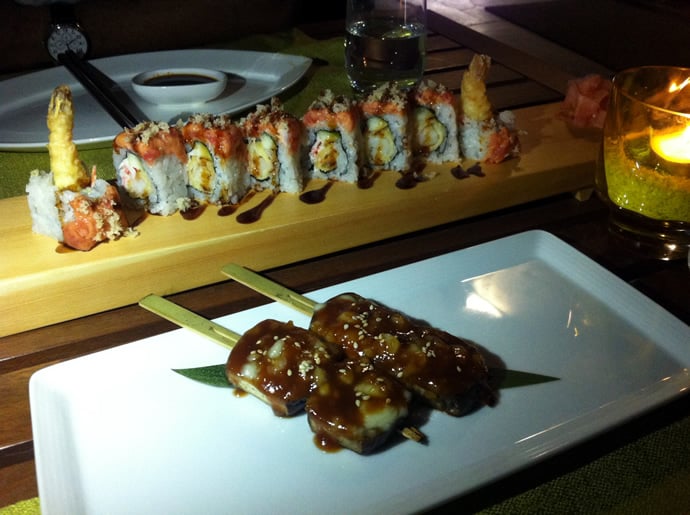 As for the robatayaki, I have to say the two-piece per order concept is again a gourmet hit, especially when served up with an array of lacings like Korean BBQ, Korean Spicy and Sea Salt. And Apple Tonkatsu of course, which was the cause of much curiosity at our table! As the restaurant’s charming American chef later explained, it was prepared with apple concentrate and from my own experience, worked decently well with the Tsukune (minced chicken). The wonderful lady behind most of our great ordering, however, said that while the sauce was one of the chef’s favorites too, Tsukune tastes best with a Korean Spicy glaze. 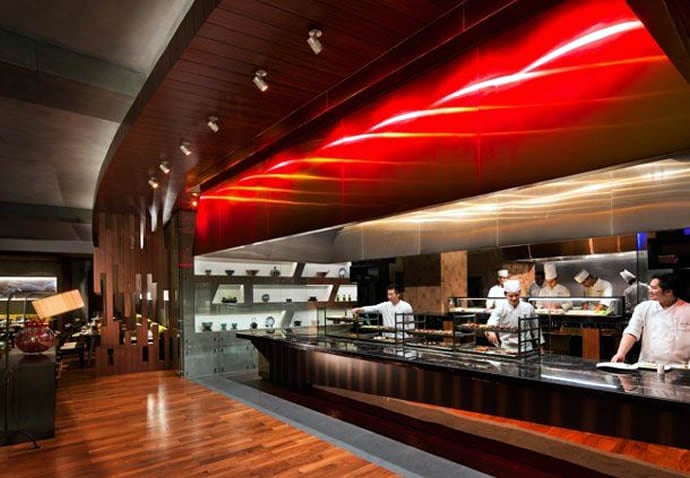 I couldn’t learn any more about it though as my next robata order of eggplant with miso and mozzarella arrived with the now familiar Apple Tonkatsu again, perhaps a result of all grilled-s being based on the first choice? This time, the eggplant’s thickness or rather lack thereof, rendered the dish too sweet for a non-dessert. Which is why I chose to be more particular upon my order of mains. I double-checked with the first server who appeared when ours got lost, if I should sample the Sous-Vide Chicken yet another curiosity-evoking selection. By now it must be clear to you that in Akira Back’s menu you will encounter several such temptations. 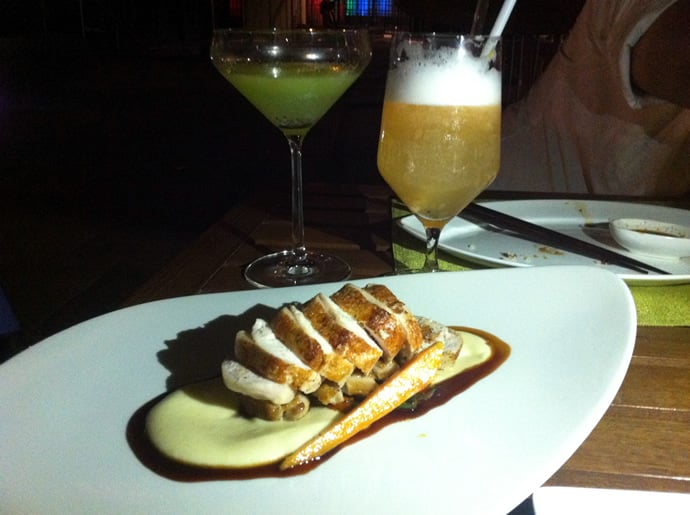 French for “under vacuum”, sous vide had been a partial-cooking technique I was dying to test. Call me conservative or not as big on raw tasting meat but I realized that testing done, wood-fired ovens are the last, most fabulous word in cooking! Because if you’re meat-friendly to the point of relishing rareness of chicken you could go ahead and give a try to this result of a method that is effective but from what some experts claim nixes the role of the senses. That still doesn’t change my view of its velvety potato puree though, which played comforting base to the chicken or the green beans that lent the crunch to the meaty mush or the maple-y concoction that gave it its underlying flavorsome essence. 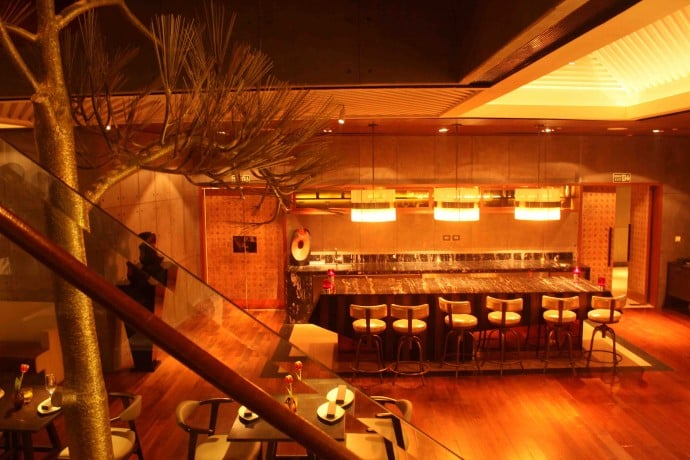 But getting back to sous vide, the technique, I have one last thing to add, which is that in the restaurant business, it can do many wonders if not used as a whole but only for part of the cooking process. Food could get on tables a lot faster and more consistent, all the while maintaining a spectacular tenderness. So if a restaurant has adopted the technology, it says a lot about the excellence of its standards. And speaking of excellence that is the exact same sentiment I had when I took a post-meal tour of the restaurant. Yes, ‘tour’ is the right word considering Akira Back has a ground and a basement connected by a stylish staircase as well as an elevator and swathed in Samurai inspired art elements. 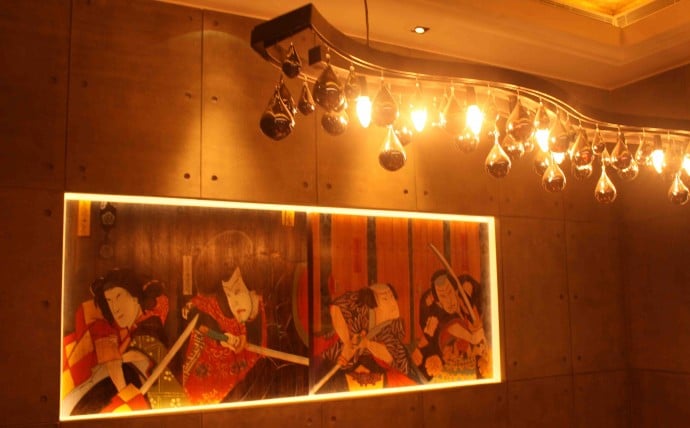 But while the lower section is fantastic for private dining, taking inspiration up a chic notch is an eight-meter tall sake wall which pans across the two levels. The design also inculcates science in a central glass kitchen, which has been developed to house the city’s longest grille. All this is not counting the al fresco seating where we’d been, in the hotel’s inner courtyard surrounded by elaborate water features and soothing greens. As the restaurant is only open for dinner and the climate this time of the year is conducive to an evening spent outdoors, we saw ours to a close with a delicate Chocolate Lava Cake with vanilla ice cream and peanut powder, and the dense Akira’s Chocolate Bar with coconut sorbet and a crunchy macaroon on top, besides good weather. 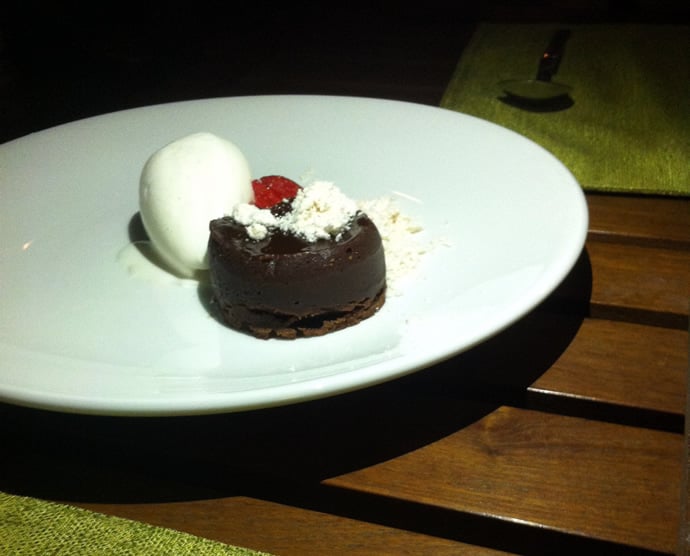 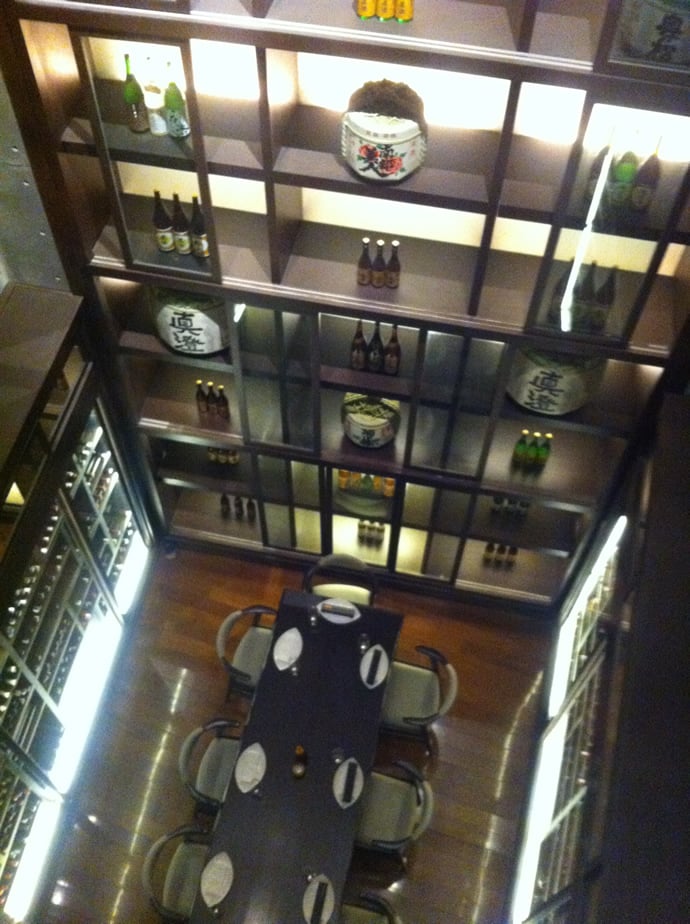