It’s strange – the idea of what one would perceive as luxury. For some, it could be a gargantuan, crystal-studded atrium that opens to a picturesque landscape of hills. To others, a quaint, rustic setting that has meticulously arranged for each of your creature comforts, without losing out on the sanctity of the experience. The Amanfayun is the latter.

Nestled in the hills of Hangzhou, this stellar Aman property is an actual village that has been repurposed to feed the appetite for luxury that many affluent travelers crave for. The bamboo groves that fill the property are a sight to behold, not more than twenty minutes away from the bustling city. Its cobblestone walkways are frequent by tourists on foot as well as monks from the nearby shrines. It is speckled with botanical gardens, several shopping areas, and decorative pagodas all around. The villagers who were the original inhabitants of this village were tea planters and to this day, they practice their trade. The Amanfayun is a UNESCO World Heritage Site and spreads across a 34-acre plot with 47 stone dwellings that date back to nearly a century.

The contrasting backdrops of Hangzhou, which is more modern and developed, and the simple setup of the Amanfayun property are starkly contrasting. The property seems to be designed to take you back in time to another era of China. It would make for a perfect period film set. Arriving at the hotel doesn’t discount any luxury. If you’re coming straight from the airport, then an employee of the Amanfayun would come to receive you. They do speak very little English, mind. A 4×4 took me to the hotel on a journey that clearly showcased the contrasting landscapes. It was a 50-minute drive.


Within the property, I was greeted by a mystical sight of one of the staffs holding a lantern in their wake. It was the evening hour and the sight was right out of a fairy tale. On enquiring, I learned that the traditional Chinese lantern was lit by an LED bulb. What better testimony would one need to prove how organically Aman hotels merge the magic of new with the charm of old. 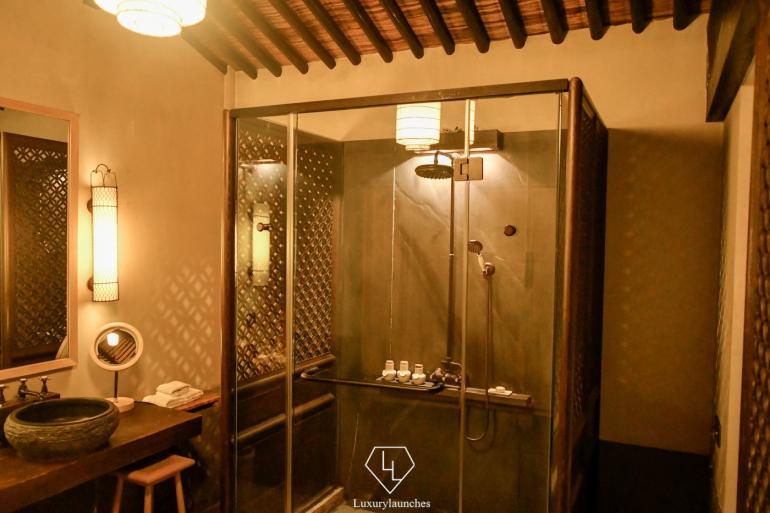 I was put up in the suite. It had a clay-tile roof and a stone floor, much like the days of yore. Being a village themed hotel and pretty much sticking to the authenticity of being an actual village, one can expect each room to be unique. The three categories of room up for offer were the Deluxe Village Suite, the regular Village Suite and the Village Rooms. The rooms kept up the minimalist Aman design style and managed to recreate the perfect setting one could expect in a Chinese village household, over a century ago. The luxury was manifested in the simplicity of each element. The paper lanterns and earthy tones kept this look alive, giving me ample opportunity to populate my Instagram feed with several #nofilter images.

The Amanfayun is home to two restaurants. The first one’s simply called ‘The Restaurant’ and serves Western comfort food. You can expect global cuisines here if you aren’t one for trying local delicacies. The second one is the Steam House that has an open kitchen. The food here consists of, you guessed it, dumplings, along with authentic-styled village delicacies. I found the meal options to be comparatively lesser than my other Aman experiences. You could also patronize the score of independent eateries that the Amanfayun hosts, along the Fayun Pathway. These range from a tea-house to a vegetarian-special joint. 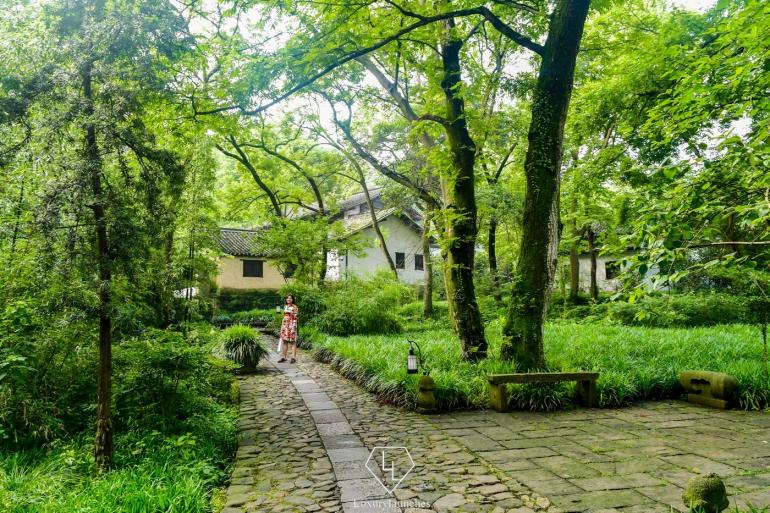 The Fayun Pathway is a beautiful cobblestone trail that covers the distance of the entire property, connecting key guest areas and dwelling spaces. At the heart of the Amanfayun is the Fayun Place with its tall ceiling and enchanting Cigar Room. If this was truly a village then here’s where they’d assemble to discuss affairs of legislation and administration. If you’re more spiritual than indulgent then you could plan a visit to the nearby Buddhist temples is highly recommended. The temple trail here is extremely popular, especially during the early morning hours when the crowds haven’t descended yet. Or, the stream would make for a beautiful companion as it sings it songs to soothe and sway you. Activity seekers could always try drifting down the West Lake on a little boat. This was one of my most memorable moments. The hotel provided for the boat and a guide to set me on this mystical trip. The West Lake is considered to be one of the most romantic destinations in all of China.

The hotel has a brilliant spa with separate areas demarcated on the basis of the therapies they provide. These include the Reflexology House, Bath House, Fitness Centre, Finishing Salon, and the Treatment House. A 20-meter outdoor pool awaits you after the long walks and activities. It is heated and offers a pretty scenery to feast your eyes upon. In the entire scheme of things that make the hotel the stand-out heritage site that it is, the pool seemed to be quite out of place as it was flanked by modern recliners.

The language barrier does stand in one’s path to a complaint-free holiday experience. But if you’ve traversed the shores of China before, you’d appreciate the effort made by the meek staff here to try and communicate with you. The Concierge and Housekeeping service does well to ensure that you have what you need when you need it. They’re well trained and polite in their manner. The hotel does open its doors to both private and business functions. An idealistic setting for those key offsites that come with the incentive to unwind. 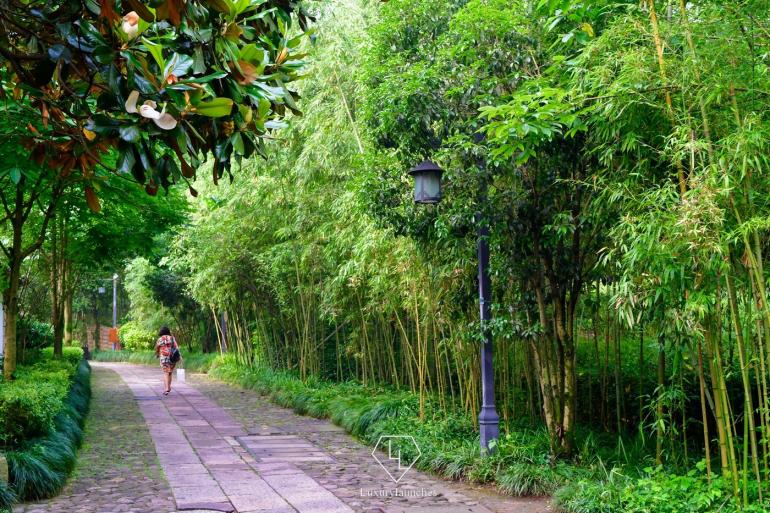 In closing, I’d like to reiterate how wonderfully simple this experience was. It stood miles apart from the sprawling halls of grandeur that other luxury properties and even some Aman’s offer. The Amanfayun brings with it the right balance between luxury, simplicity and above all, raw, ethnic authenticity that very few hotels manage to replicate as effortlessly. 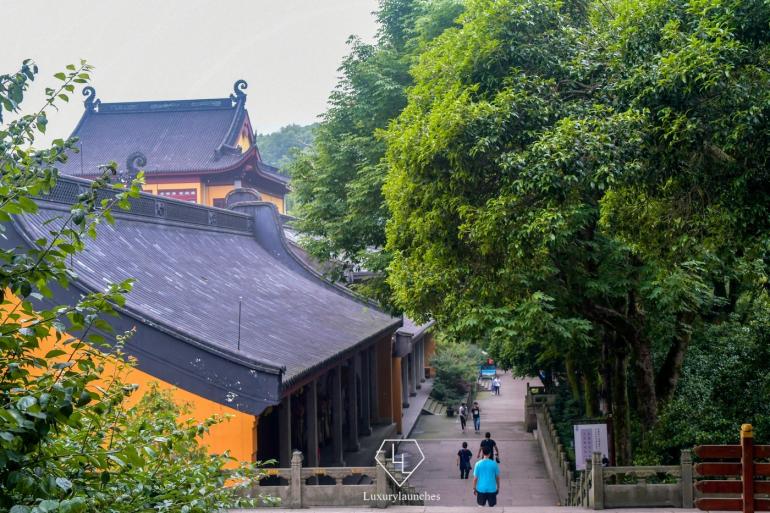 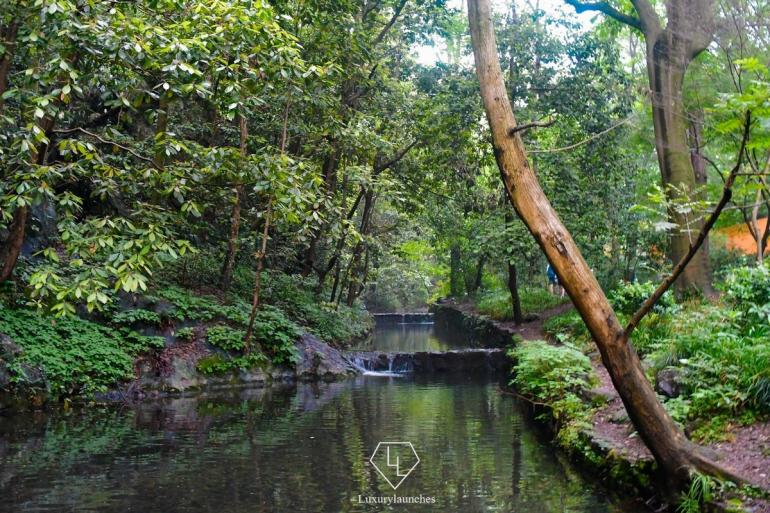