Nine months ago Chef Jan Hendrik van der Westhuizen opened his first restaurant in the old port of Nice, on the famous French Riviera. Once a yacht chef and a contributing food editor of Elle Magazine, Jan Hendrik is now a culinary virtuoso at his eponymous restaurant, which is already one of the favorite gourmet destinations with local foodies and international visitors coming to Nice. We decided to go and visit Jan for lunch to see for ourselves why this luxury restaurant is considered to be one of the best on the French Riviera. 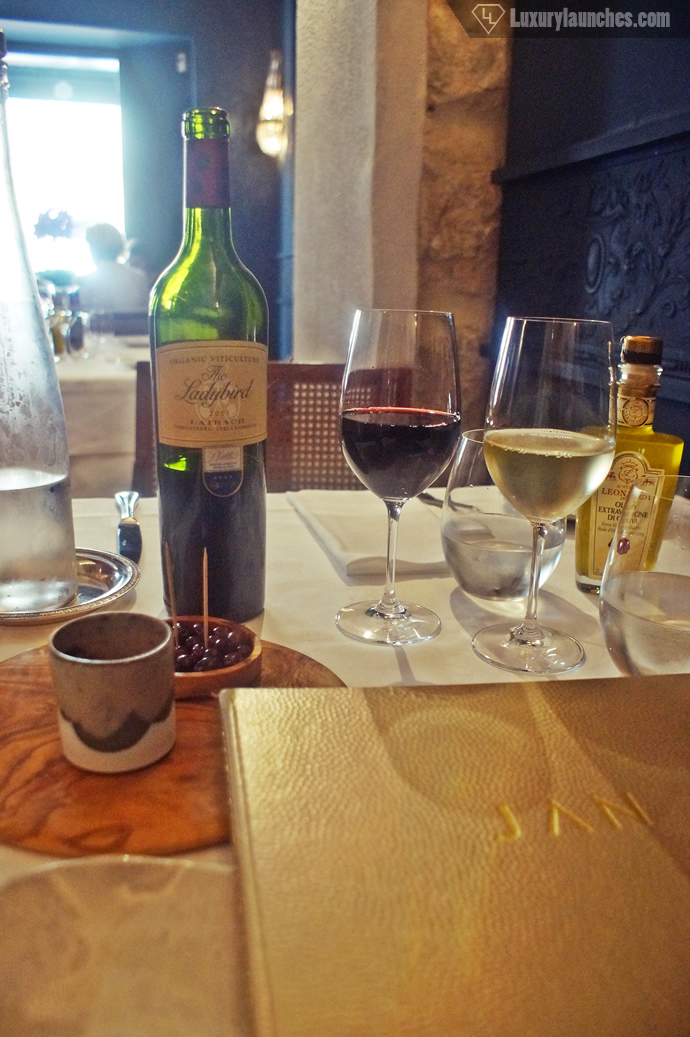 Restaurant Jan, situated off the old port of Nice, down a quiet street, is simply a hidden gem. The interior of the restaurant is absolutely stunning. The dark blue walls, along with the wooden deck chairs, give the restaurant a Provençal yet upscale luxury feel. Nuance could be Jan Hendrik’s middle name as every single element of décor, table setup and dishes is chosen with great care and a keen eye for detail, from the dinnerware, some of which was made by local artisans to the gourmet accompaniments, such as exclusive Leonardi Vinegars. It is evident that Jan is good at what he does as he creates luxurious fine dining experiences. 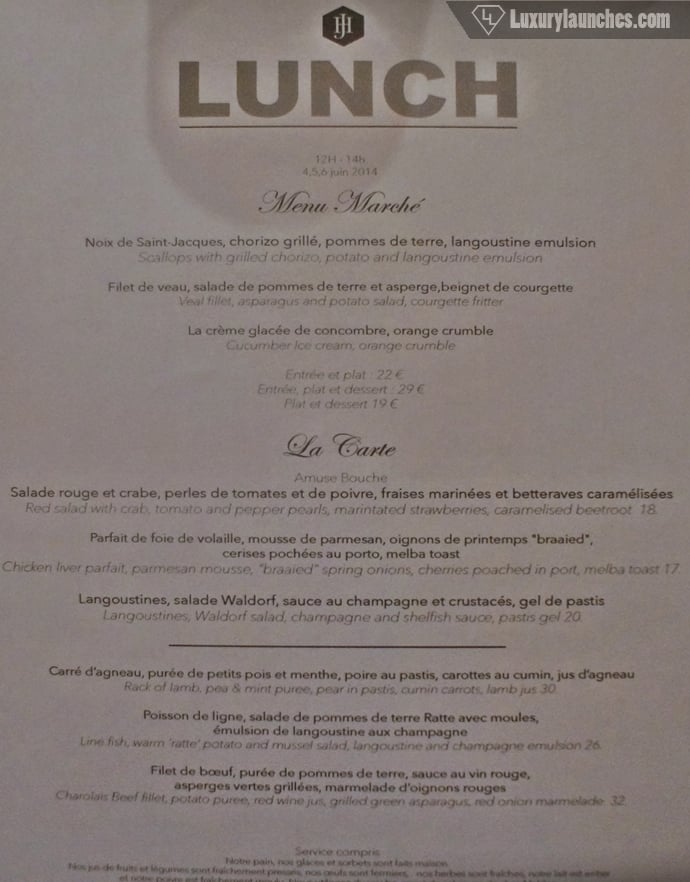 Once we were escorted to our table, a homemade loaf of bread was brought on an olive wood platter by a welcoming server Emmanuelle. With a mouth-watering selection of gourmet dishes to go, we found it difficult to decide what to have, so the Chef suggested that we opt for the Menu Marché, which was composed of three courses. Our culinary journey began with the divine entrée, which consisted of a langoustine emulsion with fried scallops, grilled chorizo, and potatoes. 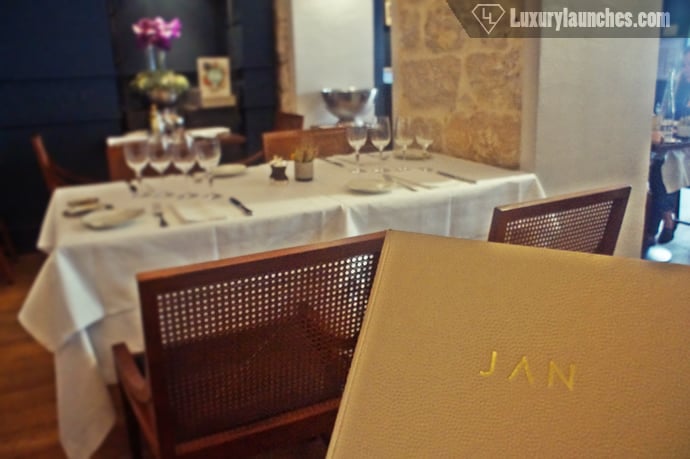 This was followed by the main course comprising a succulent veal steak fillet accompanied by asparagus and potatoes, which lay on a bed of light courgette fritter. 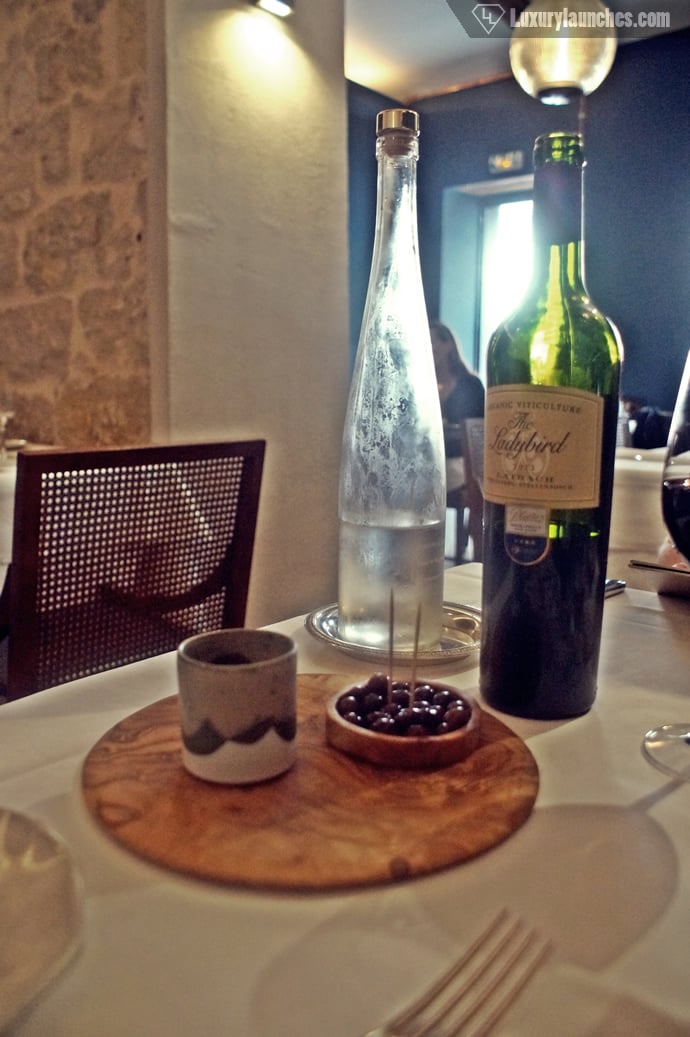 If you find yourself at restaurant Jan, you cannot leave without trying one of the Chef’s desserts, as they are exquisite. We were served a scoop of fresh cucumber ice cream with an orange crumble, which was spectacular. Cucumber ice cream? – you may ask. Indeed, although it sounds like something that would not work, it did work very well, contrary to any expectations. What else would you expect from a master patisserie chef ?! 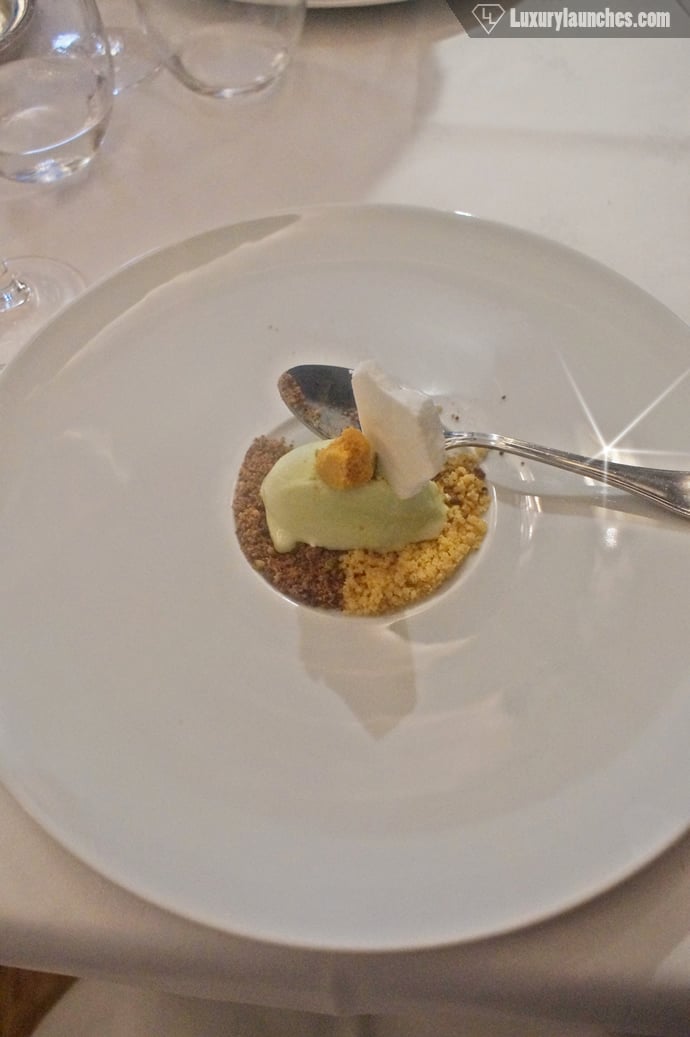 To complement our delicious three-course meal, there was a degustation of well-assorted wines. We were served a South African Shiraz rosé, carefully selected by our waitress. The wine had a beautiful hue and a deep taste, perfectly complementing the dishes. 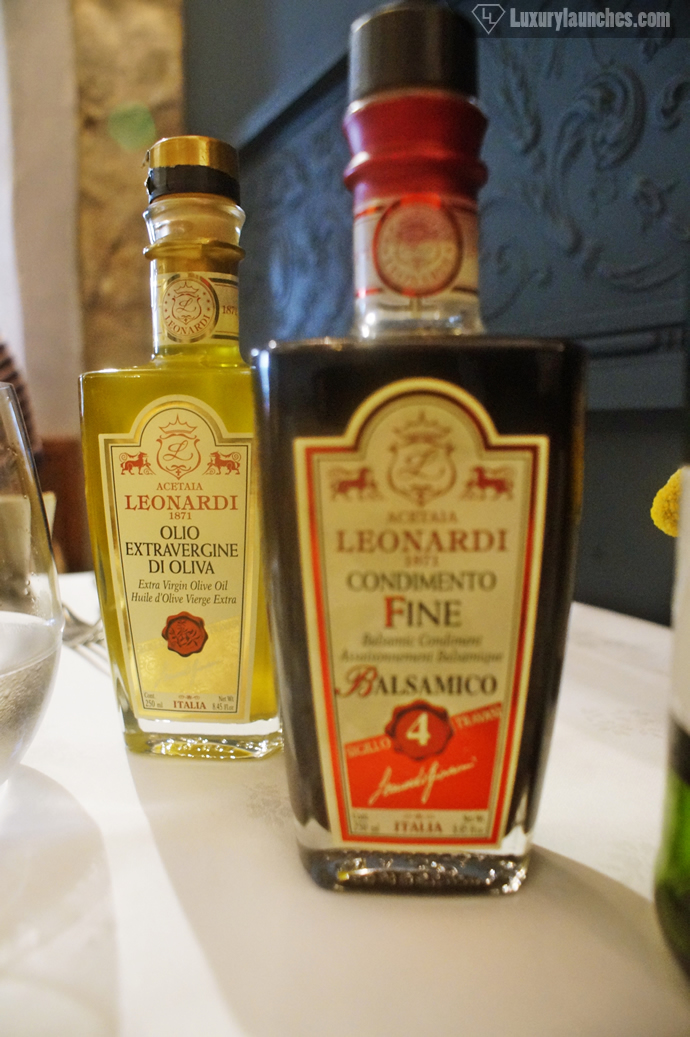 From a young age, it was Jan’s dream to become a chef. He started by cooking at home, and then perfected his skills during his Masters in Pastry. His most recent book, the French Affair, Tables of Love, is a tribute to his grandmother, who first taught him the art of cooking.

After the meal was finished, we took a few moments to ask Jan a few questions: 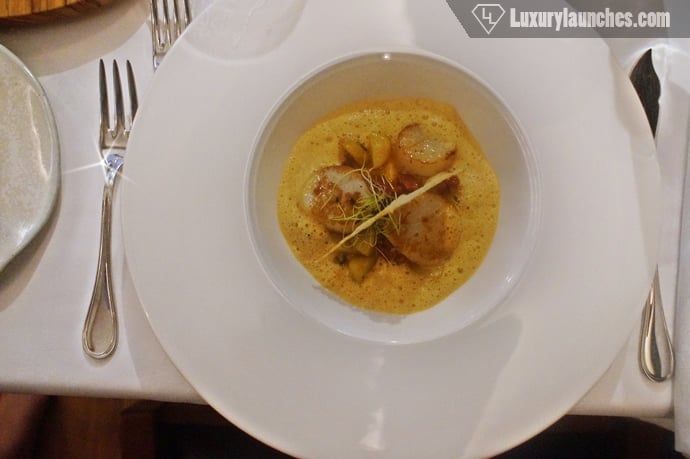 Jan, why did you decide to open your first restaurant in Nice?
Nice reminds me a little bit of Cape Town: the climate, the mountains, the sea, the holiday atmosphere. 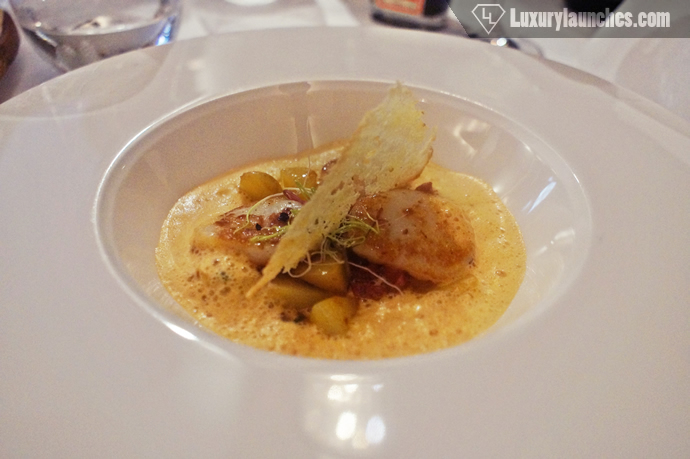 Where do you shop for your produce?
Prior to opening my restaurant in Nice, I had worked as a chef on a yacht in Monaco. Finding the right supplies then was easy as we worked with a yacht provisioning company Gourmet Deliveries, which supplied nearly all of our yacht food. When we were setting up the restaurant here, finding the right suppliers for our produce was one of the most challenging things. However, now we have it all settled. We are currently using a number of local vendors and some in Ventimiglia, a city on the border of Italy and France. 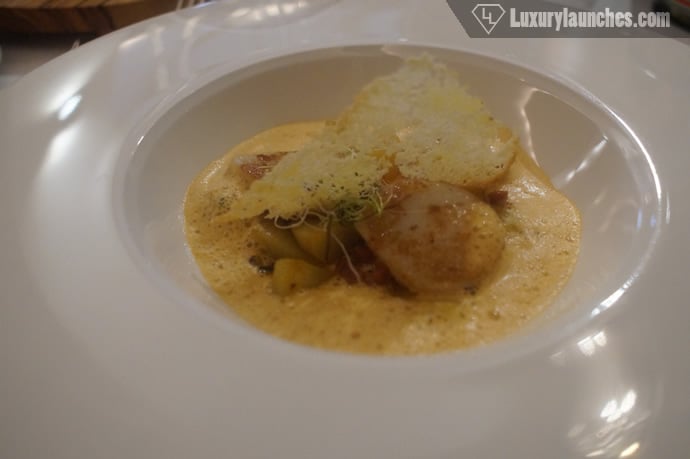 What are your essential ingredients, the things that you cannot live without?
That would be chocolate, cream, and butter. I quite like adding them to dishes that I create. Everything that has to do with food inspires me. This is why I like playing with various ingredients, and when I am satisfied with the outcome, I put it on the menu. That is how the cucumber ice cream was created that I just added to our menu. 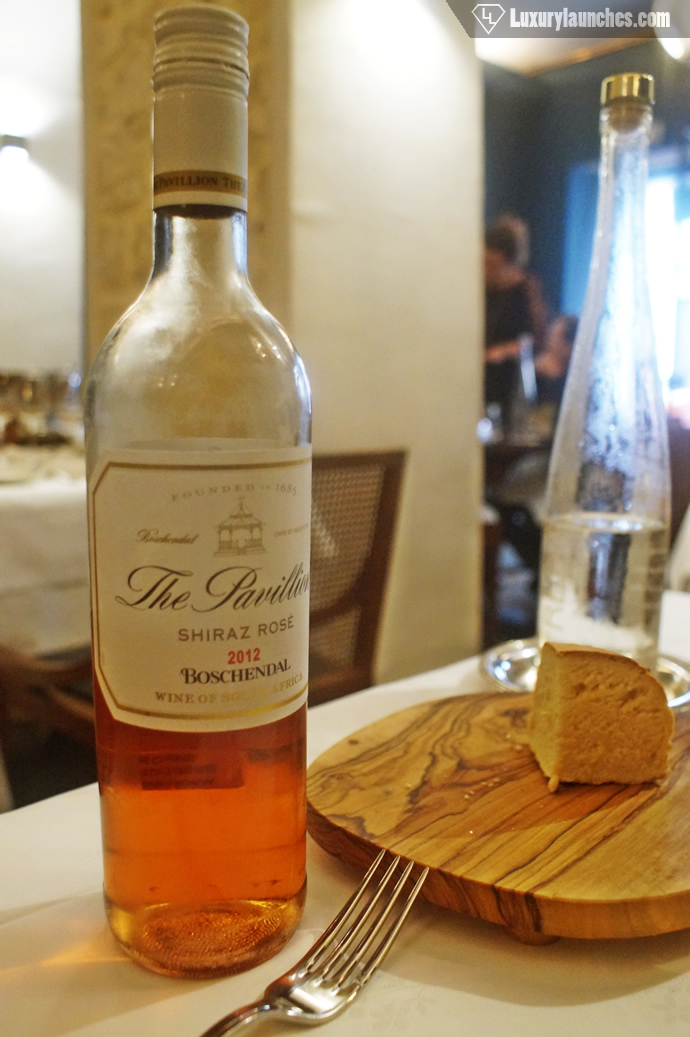 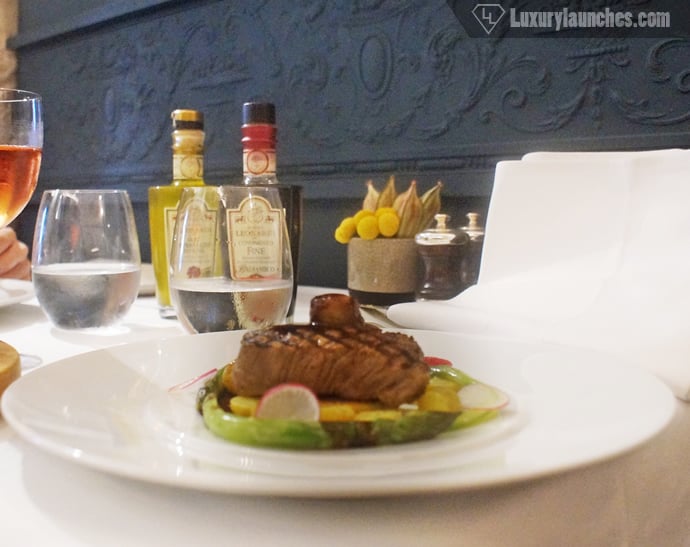 Lots of people mentioned that they had enjoyed meeting the Chef after their meal. Do you often come to greet the restaurant’s clients?
I really like that part of getting up and meeting Jan’s visitors. Plus, hearing their feedback is invaluable to us. We have a very calm kitchen, with a friendly atmosphere, so we have a positive synergy in the restaurant. 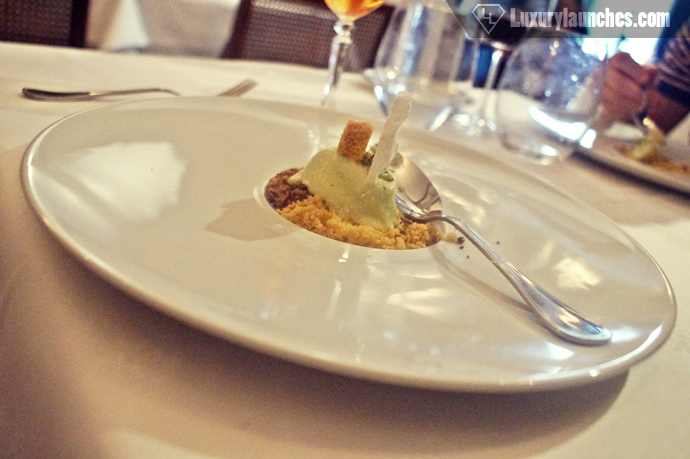 What are your plans for the future?
It is hard to answer this question because I like to surprise people. My second book is in the works right now, so that is something that you can expect to see from me in the future.

Tags from the story
France, Restaurants