One of the most charming relationships in this world is that between the old and the new. It is like the innocence of a child, sweet and honest. For a bustling city like Bangkok with its urbanization and modern infrastructure, there are several ancient and age-old hidden gems – some standing tall and proud in the heart of town and others tucked away in a cozy yet significant location … like the Mandarin Oriental Bangkok.
The hotel’s history dates back to the mid-nineteenth century and the old world charm has not left the property and its ambiance rather has aged like fine wine.

My trip to Bangkok was in a hot and humid February, the stuffy weather now synonymous with the city. But this was a discomfort too petty to lug along at the Mandarin Oriental, as there is only sufficient time to relish in its ancient luxury. Mandarin Oriental is historic to the brand and the city of Bangkok, as much as Taj Mahal Mumbai is to the Indian city.

The hotel was built on the banks of the Chao Phraya River in 1876 after a fire had gutted the initial building (a rest house for foreign seafarers) in 1856. ‘The Oriental’ as it was called, was the first luxury hotel in the city and hosted the crème a la crème of the world’s literary, art and cultural icons, legendary movie stars, famous politicians and royalty alike.
W Somerset Maugham, Joseph Conrad, Princess Diana, US President Nixon, Audrey Hepburn, Michael Jackson, Sean Connery, Marlon Brando, Elizabeth Taylor and Billy Idol have all come, lived and loved the hotel – a lot of them depicting the property and its surroundings in some of their masterpieces.

The hotel went through several owners. During the Second World War, liberated allied prisoners of war ransacked the place, which was then under Japanese ownership but was later restored after a team of 6 investors took over the hotel. The Oriental reopened in 1947, in 1974 Mandarin International Hotel Ltd, owner of The Mandarin in Hong Kong was formed and in 2008 it formally changed the name to Mandarin Oriental, Bangkok.
The Guardian describes the property as “the preserve of wealthy travelers and cultural icons, perfectly cosmopolitan while exuding traditional Thai charm.” No arguments there. 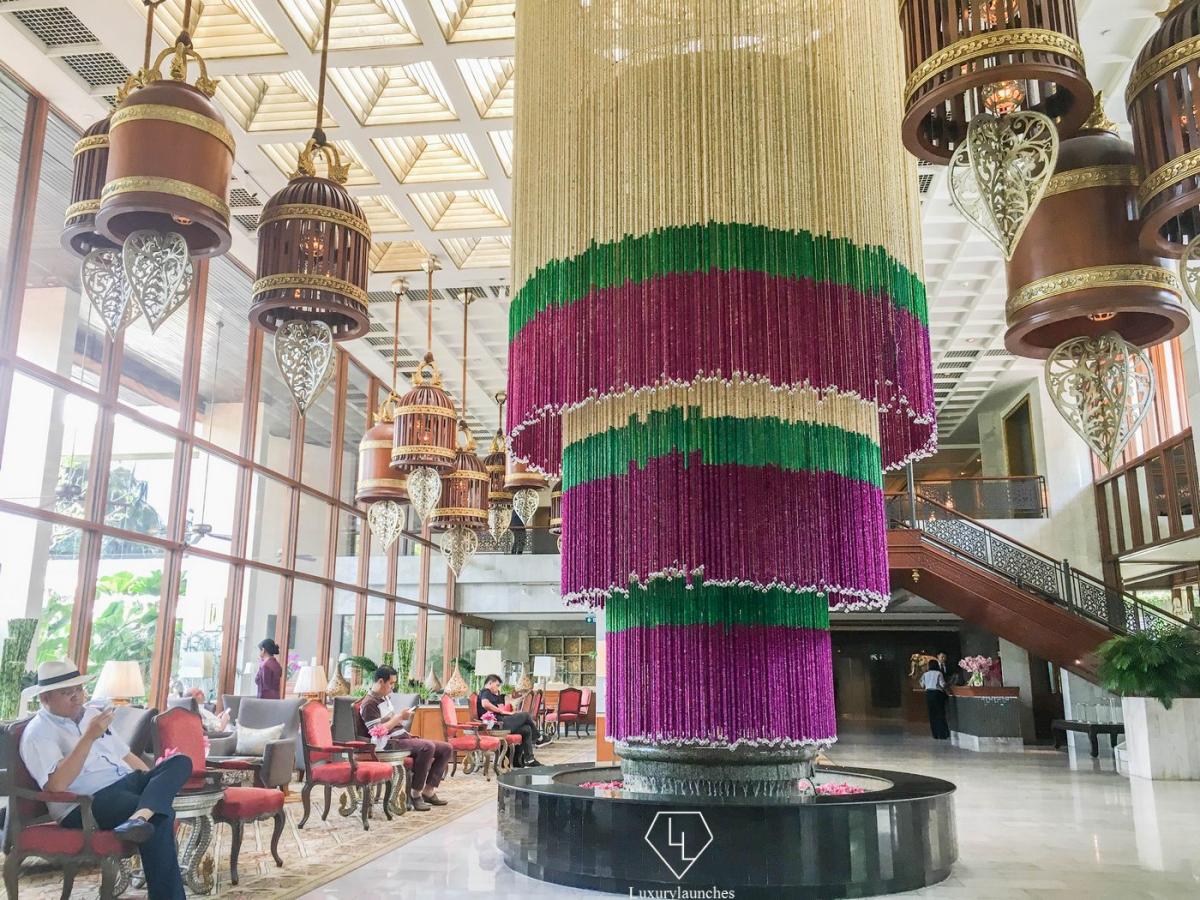 The first impression is the best impression, believes MO BKK. The Lobby is a living example of this. Step in and you are welcomed by the whiff of 400,000 fresh flowers. You are welcomed in by the ever-friendly ‘sa wah di khaa’ and you feel urged to respond in a similar fashion. But irrespective of this exchange, you will be welcomed with a garland before you are checked in and escorted to the room.

The five-star hotel is spread over two areas, separated by the river in between, and divided into three wings – The Author’s Wing, the Garden Wing and the River Wing.


The hotel’s main complex which includes the lobby, room wings, bars, restaurants and pool. This is connected to the opposite side by a boat-ride, to an estate acquired in 1983 and featuring the popular foodie haunt, Sala Rim Naam, The Oriental Thai Cooking School – the first cooking school in the city and a fitness centre. The Spa is also located here. The teak shuttle boats ply every 5 to 10 minutes, so you aren’t push against time.
The Room –
The hotel today features 373 ‘luxuriously appointed’ rooms and 35 suites – most of them are equipped with great views of the river. The specialty suites include – Author’s Suite, Siam Suite, Selandia Suite, Oriental Suite, Ambassador Suite and the Royal Suite.
The missus and I were checked into a Deluxe Room in the River Wing, on the 15th floor. Yes, the view was spectacular, especially in the evenings.

Though luxuriously appointed, the living quarter was more compact when compared to other hotels in the city. There is a generous use of wood and teak in the room on it’s along with fine Thai fabrics and furniture textiles.


Food and Drink –
Food is a serious business at MO. Due to the number of years it has been serving loyal guests and because they are such legends in hospitality, they take special care not to leave their esteemed guests disappointed. So … they opened 9 F&B outlets – bars and restaurants – which should pretty much cater to every palate, taste, fuss and preference.

One of the oldest and the most popular venue at the hotel is The Bamboo Bar, which opened in the 1940s. The venue is revered for its live jazz music every night and a great selection of cocktails. In 1958, the Garden Wing added the celebrated French restaurant, Le Normandie.


Our favorite was the pavilion at the Sala Rim Naam. Back home in Mumbai, this name would have raised a few eyebrows, but in Bangkok, this is symbolic to a scrumptious traditional Thai fare, with a view (of the busy river) and a show (traditional dancers show us how it’s done)! Another option to enjoy the grand views of the river and the cityscape is Verandah, which offers light bites to eat. 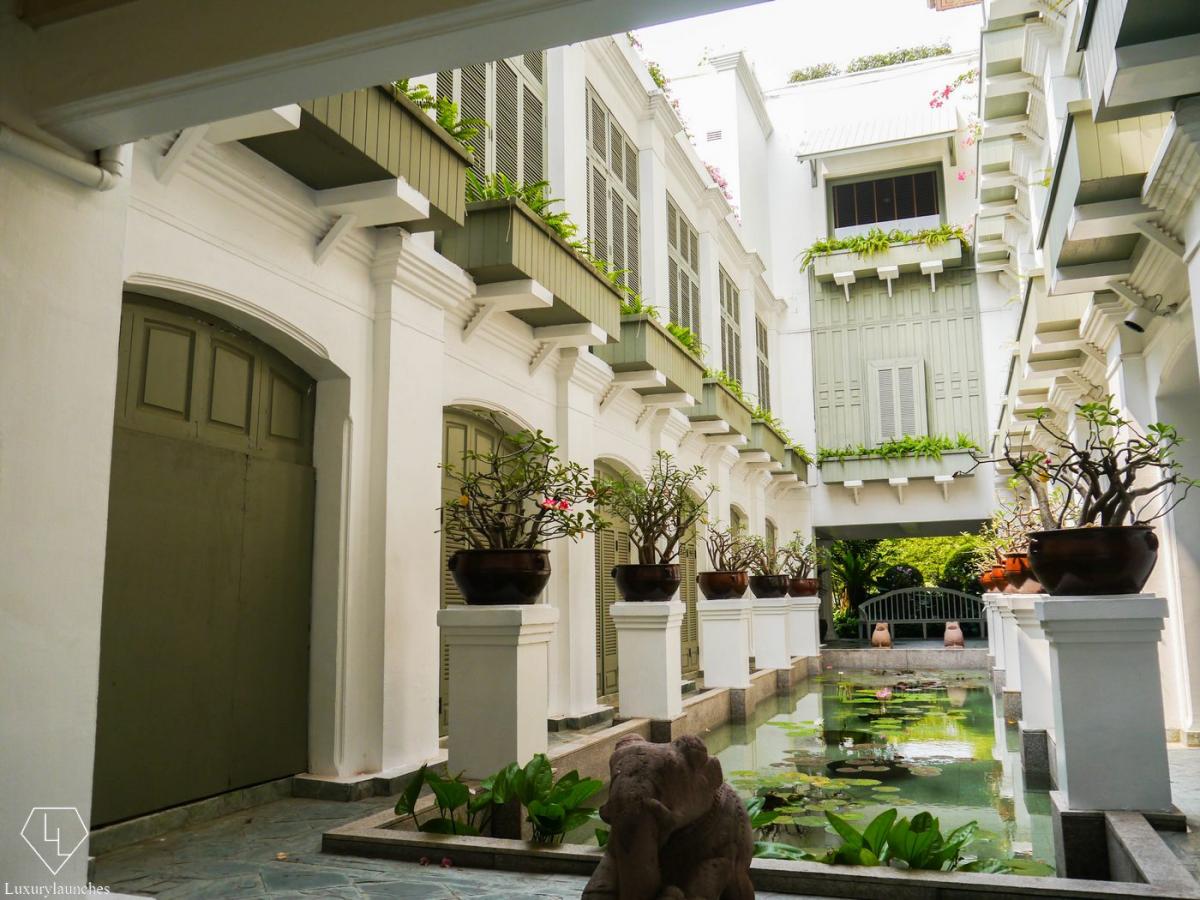 No trip to Bangkok is complete without a trip to the spa for a traditional Thai massage. The spa at MO is situated across the river from the hotel. The Oriental Spa is located in a restored century-old teakwood house. Meditation, massages, herbal remedies and Ayurveda will leave you spoilt for choices. But that’s not all, the spa also offers a Moroccan bath and Swiss facials, too. 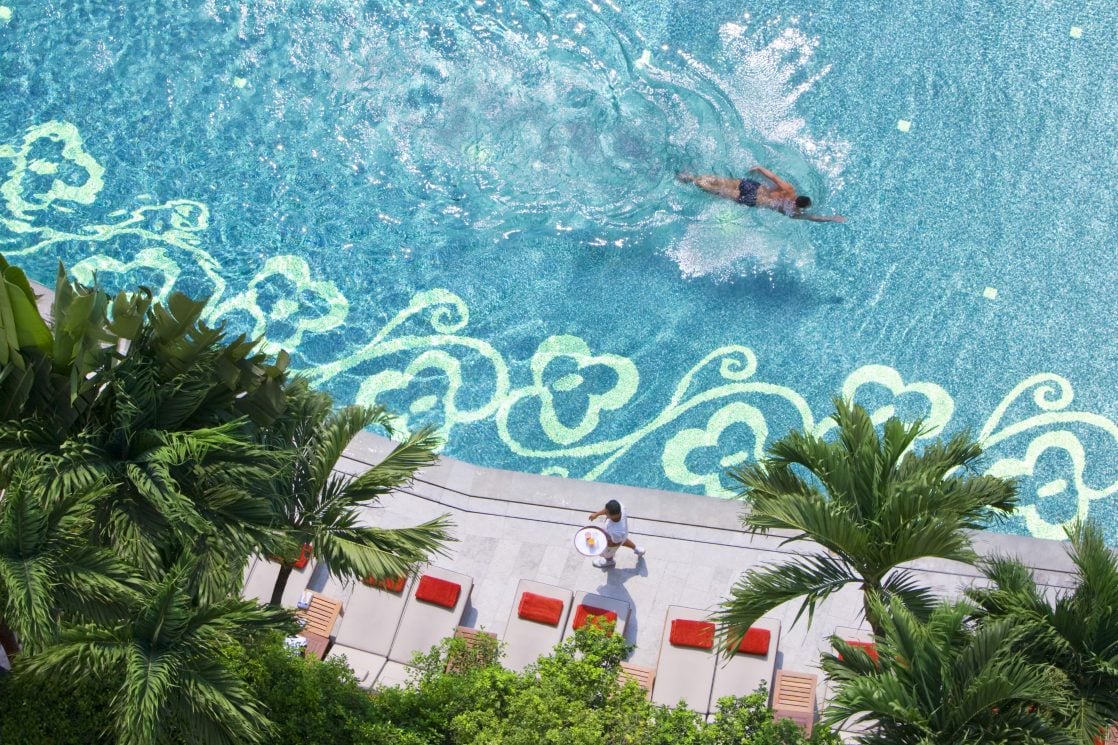 The hotel has two pools – blissful, considering the hot and humid weather the city so grudgingly boasts.
If you are not one of the above activities, then it is a great idea to take a stroll around the property or take a dip in the tree-lined swimming pool or even relax with a book borrowed from the hotel’s library, with cabinets.
Being a truly global brand, tucked in the comforts of the city, MO Bangkok treats its guests like royalty. The property employs more than 1300 people, and they all know how to treat a guest right – the service at the MO is unmatched.

One peculiar discipline that the hotel requests of its guests is the strict “smart dress” policy in the lobby and throughout the hotel in the evenings. Gentlemen are expected to wear long pants, even if they are stepping out into the humid city.


Charm Quotient
This hotel has several old world charms – one most endearing is the story of Khun Ankana, a receptionist at the hotel. She was the oldest employee, having served for 60 years. There is a study named after her, which she uses to-date whenever she visits the hotel.

Not craziest per se, but we had a tour of one of their suites, the Graham Green suite. Where a couple (their surname was Green, so they always preferred that suite) have been coming for a decade. They stay in the suite for four weeks. All the staff knew them. The staff clicks the photos of the suite when they checkout, keep all their stuff in the store room and when they are about to come they arrange it all back as to when they had left. 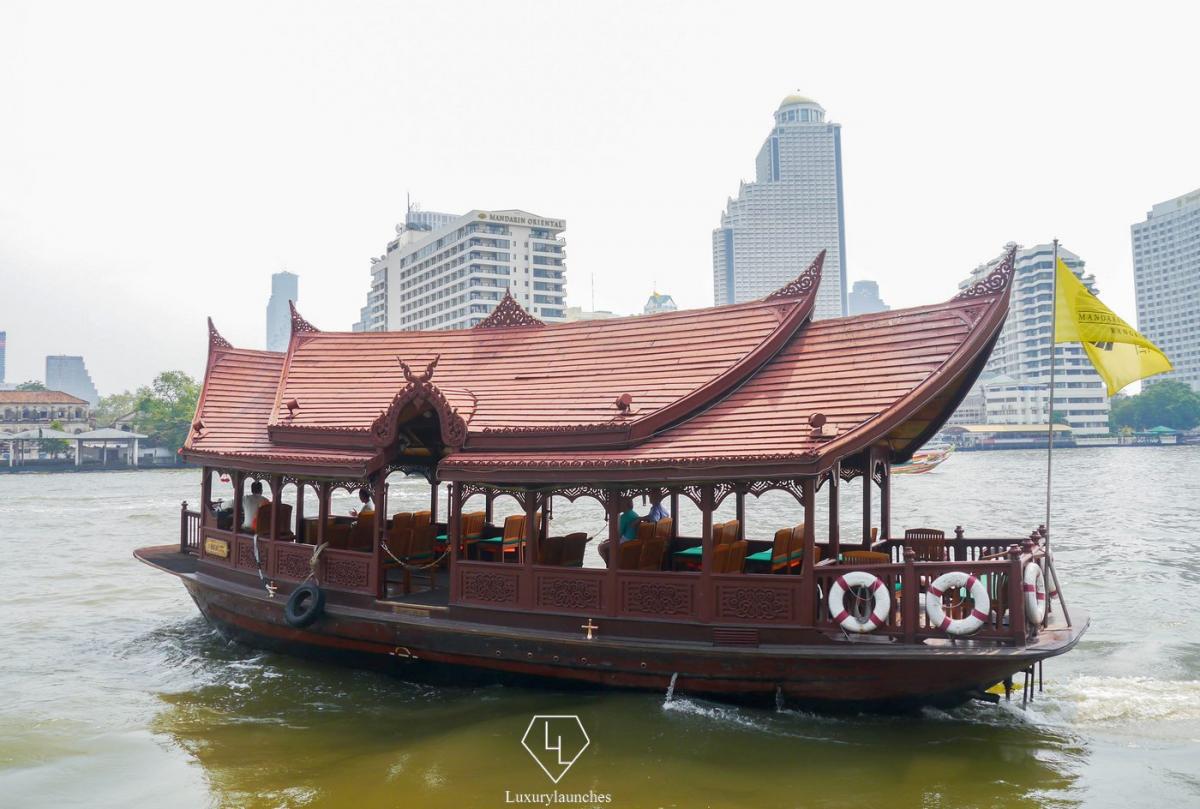 Attractions & Activities
Situated on the river the hotel makes full use of the waterways. Brightly lit boats with comfortable seats ferry guests to nearby places and attractions. The missus and I enjoyed a ride in one of these to reach the Sky Train station and the Asiatique Mall. Skybar was too good, awesome views of the city with innovative cocktails. It’s flooded with travelers and expats. 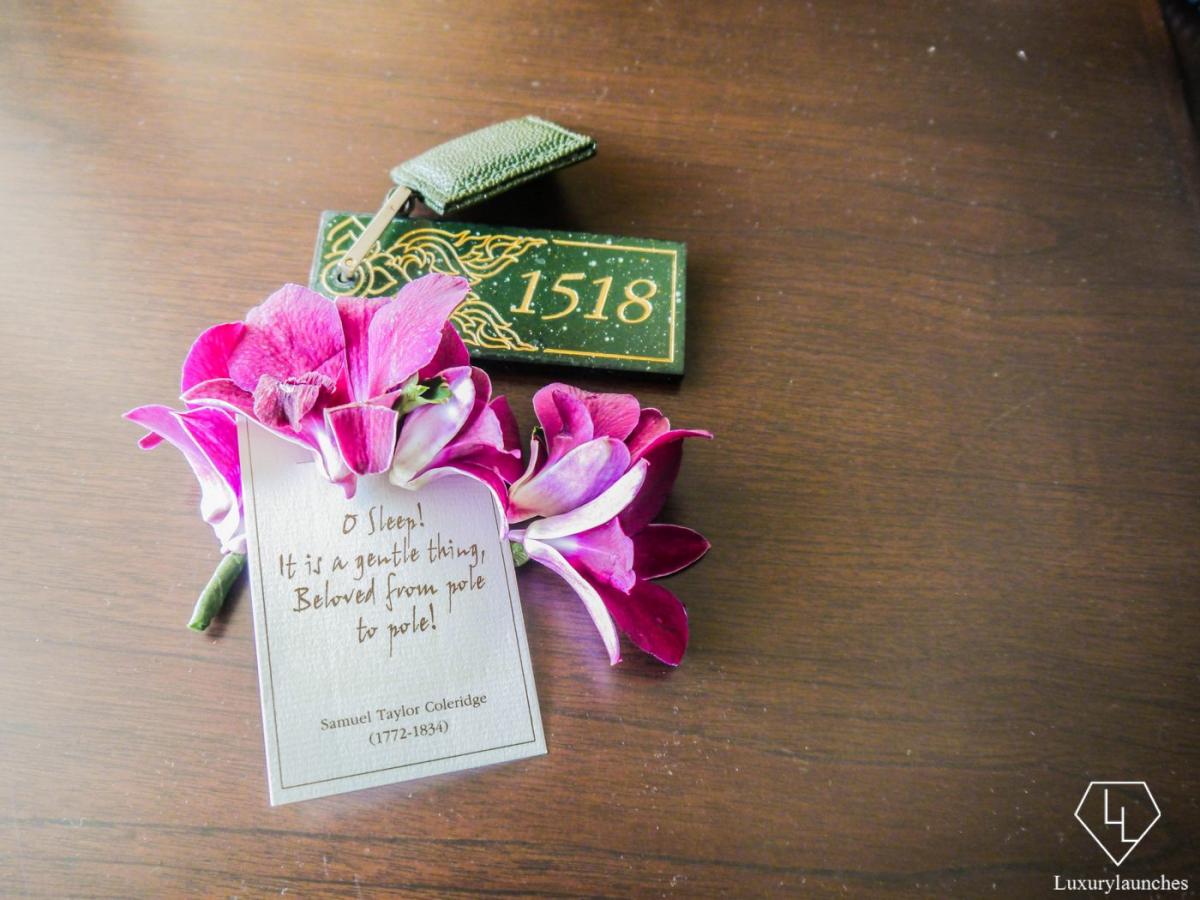 Perhaps because of the many authors and artists, it has housed over decades, the Mandarin Oriental Bangkok makes such genuine efforts to please its guests that it can’t go unnoticed. Like finding little notes on our pillows, just before calling it a night, featuring quotes by famous authors.

Verdict:
I have had a taste of Mandarin Oriental before, when I experienced their brand new property at Guangzhou in China. But this one? It was a totally different experience – something more surreal and adventurous, like being transported to a different era yet staying grounded all the time.

Note– The critic was invited by The Mandarin Oriental Bangkok. But all the opinions expressed herewith are his own.