There’s nothing like an excuse for indulgence, right in the neighbourhood. That’s what Sri Lanka’s pristine beaches, natural way of living and warm and friendly people promise, should you ever drop by for a holiday. It’s just what you’d expect if you’re looking for a parallel culture that’s nearly Indian, yet so distinguishable in every aspect. Colombo is the country’s booming metropolis and it’s here that I found my resort to luxury. The Shangri-La is located in the city’s Galle Face Green, known for its spectacular promenade and populous, which is largely comprised of young city dwellers taking in the midnight coastal air. 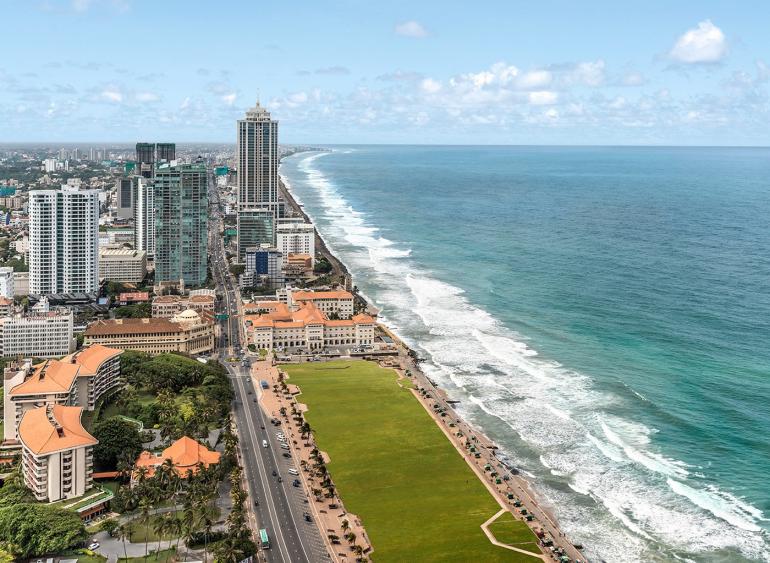 I arrived at Colombo airport after a surprisingly brief international flight and had to travel just 45 minutes towards the coast to reach the Shangri-La. It’s a fairly new property in comparison to the ones I’ve treaded on, across the Far East. A lot about any hotel experience is resonated from where it is located. The aforementioned promenade is buzzing with city life around the clock. It does have its ominous din of activity, which may not peak the decibel levels of Marine Drive in Mumbai but gives you enough incentive to want to escape from it. That’s when you walk in through the massive doors of the Shangri-La.

With the reputation of being one of the city’s most modern outlets, comes an expectation that is fairly met by this new establishment. There are a total of 500 rooms and suites, spread out across the property and 41 serviced apartments. The key areas within the hotel are all located within the first few storeys. The lobby greeted me with massive floor-to-ceiling windows that overlooked the picturesque coastal landscape outside. In the heart of its modern design was an impressively large lotus-shaped crystal chandelier that resonated the cultural soul of Sri Lanka. The ceiling is made of wood and acts as a perfect contrasting background to this spectacle. That’s not all. I came across this beautifully sculpted life-size metal infant elephant. It is another of the many beautiful creations of Chinese artist Man Fung-Yi. Sri Lankans pride themselves with their love for elephants and it was a prominent design theme across areas such as the restaurant and the rooms too. 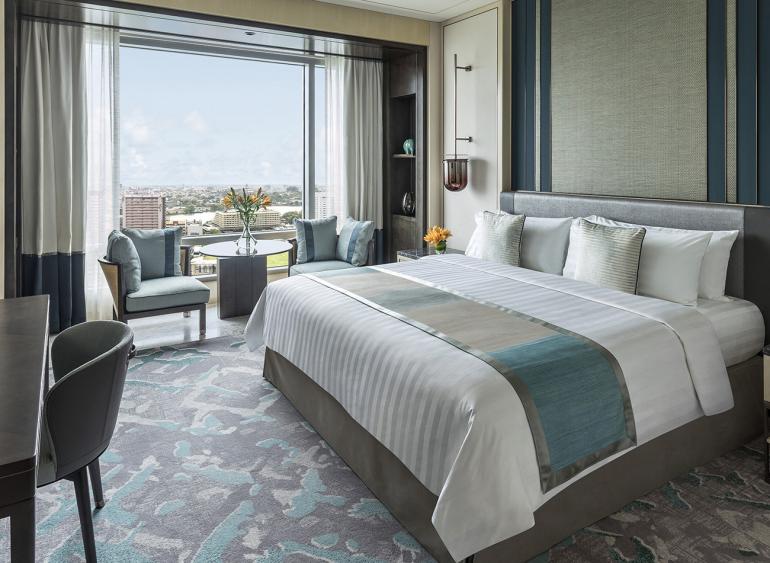 I was put up in the Deluxe Ocean View room which was spread across 42 square meters. The large floor to ceiling windows did justice to the magnificent view that the room bragged about. I could sit there for hours on end, peering over at the sea and the dots that were people, far below on the promenade. The design of the room was rather contemporary. The Deluxe and Premier rooms are identically sized, but are priced differently. This could be on the basis of the views that they provide. The bathroom was large with both, a walk-in shower and a separate bathtub. All of this with spa Ceylon toiletries made for enchanting bathing experiences, especially after a long walk along the promenade. The signature Shangri-La bed with its 300-thread-count duvet was well worth its reputation that preceded it. There was ample office equipment and a separate work space for those traveling here on a business trip (though I’d recommend the Horizon Club Rooms for business travellers). Other goodies included a minibar and options for tea or coffee.

The Shangri-La is best known for its restaurants. With chefs from across the world inspiring different cuisines across the four restaurants here, many look forward to exploring the gastronomic delights offered here. The Shang Palace offers a spread of Chinese cuisines, with authentic dishes. If you’re on the lookout for an international cuisine, then Table One would be a great option. This is an all-day dining restaurant and has some interesting interactive cooking stations where you can be a part of the food preparation process. In the evenings, I would recommend spending time at the Capital Bar and Grill. It’s here that you can enjoy some phenomenal steaks and also try out Sri Lanka’s famed seafood. Within the bar itself are four different ambiences that you can choose from, ranging from private dining options to an open-air dining experience. This is enough to spoil you for options. My favourite eatery though was Kaema Sutra. It’s a contemporary Sri Lankan restaurant that is spearheaded by the excellence of chef Darshan Munidasa. It’s here that the spirit of Sri Lanka is evident, not only in the food that is delicious for someone with a palette for coastal food, but also the décor, which is inspired by the rich heritage of the land.

And then there’s the famed high-tea at the Sapphyr Lounge. Generally designed for two, there are three types of high-tea offered here. There’s an afternoon platter, a Western platter and a Sri Lankan platter. The Ceylon Supreme Tea is a must-try. If you settle for the afternoon platter, you’ll be treated to a multi-tier serving of accompaniments. 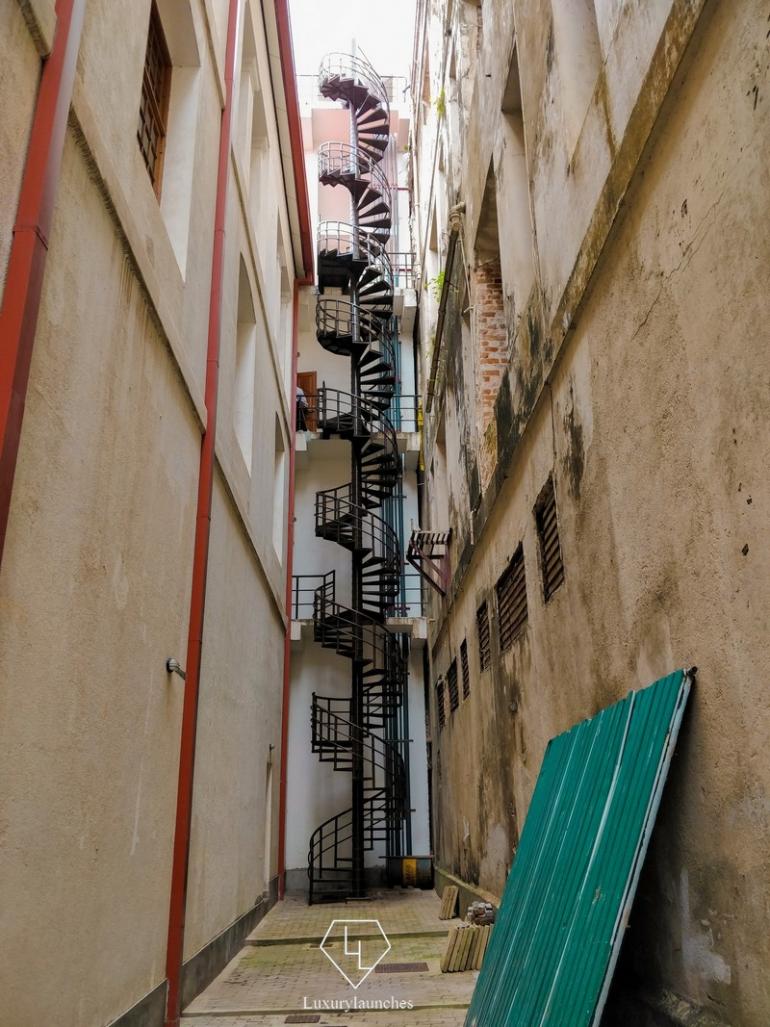 Don’t miss out on an experience at the CHI spa. It offers seven private treatment rooms, which are spacious and designed for couple treatments as well as for single people. I would recommend the traditional Sri Lankan and Asian treatments here as they’re hardly available anywhere else. The 25 meter long swimming pool could also be a great way to unwind. It overlooks the ocean and is often bathed in refreshing sea breeze. The Shangri-La also offers a 24-hour fitness centre with physical and mental wellbeing options provided. To truly get a lay of the land, you can sign up for a walk with Mark Forbes, who is a local architect. His charming demeanour and sense of humour keeps you entertained as you discover the novelties of Colombo.

The Shangri-La has a fair bit of influence from the city below but the way it balances out the Sri Lankan authenticity in it is charming and alluring. And that’s what makes it a great place to visit.

Note:The critic was invited by the hotel but all the opinions expressed herewith are his own.