Warning to the novice: the Crispy honey chickens of the menu may beckon you but try putting aside the thought of the glazed over version and plunge into a sticky abyss of the Chicken Katsu. At least that’s what I did, and as you will soon learn, I was rewarded well. Why do I say this? My stay at Shangri-La’s – Eros Hotel couldn’t have come unaccompanied by a meal at one of their signature restaurants. Rather shouldn’t have. And the epicure in me picked the award-winning 19 Oriental Avenue. But to be honest, having a Tuscan bent of palate, I was unapologetically apathetic when it came to Asian food.

Enter friend, sushi lover, and meat eater extraordinaire. Him in tow, I proceeded through the lacquered lobby of the hotel, swished up to Level 1 and stepped onto an authentic seeming cavernous opening. For some reason, it glowed blue, and while I was debating on whether to deem that spacey or serene, I settled on the latter when I saw the rest of the venue. As I had picked lunch hour for my visit, I was happy to note that the restaurant overlooked the hotel’s lush gardens. I whizzed closest to the wafting glorious winter sun and picked what I thought was the perfect table. The staff was more than glad to accommodate my sun-soaking desires but informed me nevertheless that there is a separate bar area and two private dining rooms as well. 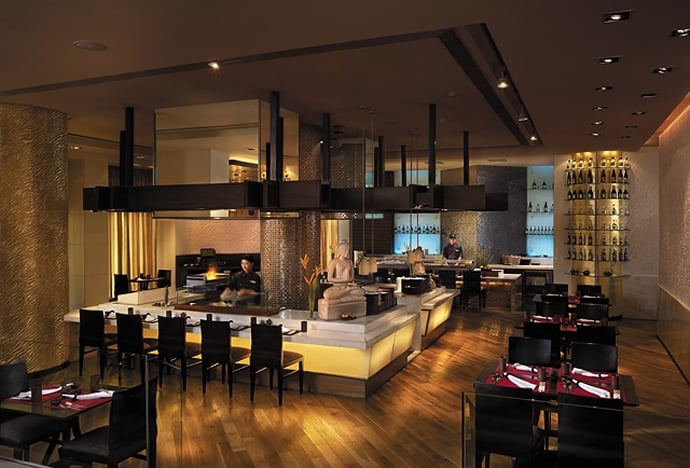 Having made note of the richness within the restaurant’s expanse, I reached out for the menu and I couldn’t say it was much different. Their extensive menu had me baffled, in the best way that is, with cuisines spanning Japanese, Chinese and Thai as well. So I will attribute the silken smoothness of the first item on my order to the server’s attentiveness. He leaped into action and suggested I try the duck soup. While my friend and fellow lunch-er exclaimed “yes” in equal enthusiasm, my veggie-leniency prompted some apprehension. That was all it took for the server to explain the soup contained enough shredded foliage to fulfill the greatest of vegetarians, thus giving it my meat-veggie-mix balancing approval. And shredded roasted duck soup with shitake mushroom and bamboo shoot it was!

Next up was Maki mono but before I could move to that (which you will see I did, and how), we were greeted by the property’s Assistant Restaurant Manager. He delighted in our keenness to conquer their brain rack-er of a menu. Not to mention a drinks menu, which he offered to decode for us by suggesting a round of fresh fruit juices. So while my friend picked a fresh watermelon, I tweaked mine with some basil shaken into the watermelon. And it was good thinking, I’m proud to announce, as the concoction arrived in a tall cocktail glass (un-spiked, though, if I may add.) Now for others like me seeking un-spikeds during lunch hour, I’m afraid to inform you that you must experiment at your own risk.

As far as the menu is concerned, it offers smoothies galore, which is good if you’re a fan but if not, picking a drink can get a bit difficult. Then again, nobody is stopping you from digging into the wine list. “Our Enomatic wine preservation system allows us to offer the largest by-the-glass selection in Delhi, besides an extensive bottle list.” The place also offers an equally expansive array of sushi I must say, which is why we couldn’t narrow down to any less than three when we ordered. There was the Tekka Maki or Tuna Roll and Katupa Maki first. Not a tun-a-ficionado, I couldn’t be bothered to look up from the excellent kimchi when it came. Munching on the complimentary sweet and sour kimchi with delicious roasted peanuts, I was only distracted by the arrival of the Chicken teriyaki salad. 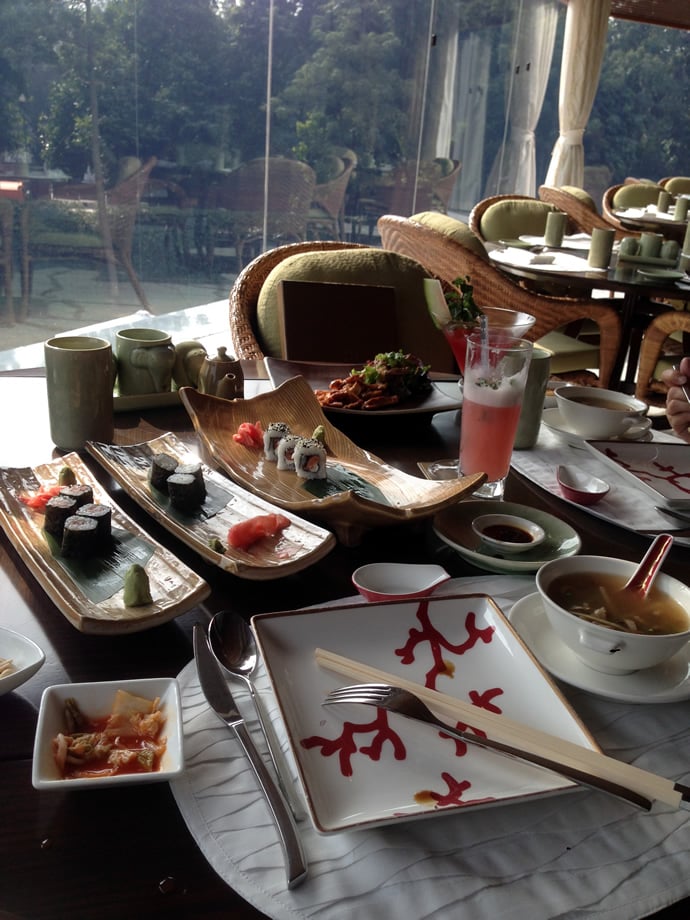 While the chicken was grilled to perfection and scattered on the salad board in beautifully bite-sized portions, its sauce was lacking the kick that usually accompanies a teriyaki. Still, I chomped on the vegetables down to the last crunch as the kick-less sweetness worked great on them. Then came my own mono the Katupa Maki or Cucumber roll. Always a staple on my sushi table, it was crunchy to my expectations. I veered to contemporary for my second maki and settled on the seaweed wrapped smoked salmon and cream cheese also known as Boston Roll. Needless to say, it was as good as it sounds. That said maki ‘mono’ doesn’t have to be the only way to go.

The skilled folks at the Oriental eatery are kind enough to offer a ‘Sushi Sashimi Tokusen Moriawase’, a Shangri-La special boat combo. And while sushi-sashimi combos may be a fixture at many menus today, given the freshness of produce, from the veggies to salmon, right down to the nori, I’d say they’re being plenty generous, and we should be plenty opportunistic in this case. And speaking of generous, that is exactly what I thought of this next occupant of the Chinese section. The steamed pork dimsum was a meaty mouthful speckled with the fragrant tastiness of coriander, the latter making it an overall delight to the taste buds.

By now, these very taste buds had undergone a sensory overload, the mocktail had run out from washing sushi after delicious sushi and now the dimsum down. So I interrupted the server’s setting up of a sophisticated table that would hold the main course and asked his recommendation for another drink. What appeared was a gorgeous lemony liquid with shears of lemongrass in it. Believe you me, I have never tasted something that refreshing, each sip a palate cleanser, each swig an eye-opening experience. I say that because I was never a fan of lemongrass but now, I rechristen that refreshment’ gastronomy in a glass’ if I may. It’s what prepared me for the main course, which began with an upgrade from elegant plates to earthen dishes. And of course, the Chicken Katsu Don. 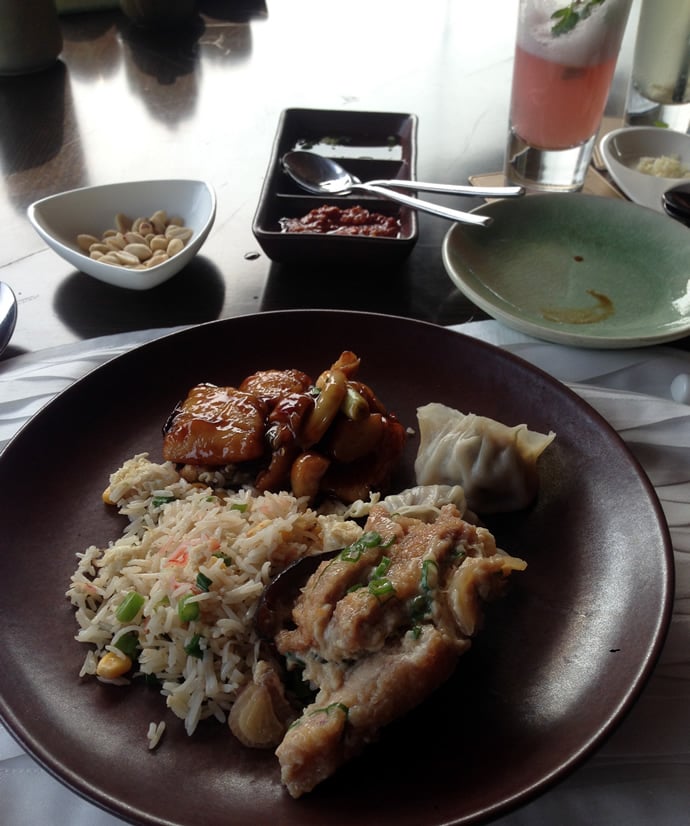 A chicken cutlet with vegetables and egg on rice, it prevailed the sticky don of the meal, for lack of a better phrase. It was somewhere around this time that I knew I had been converted. Next up was crab. Now I may be no crabmeat connoisseur. Hell, I hadn’t even tasted crabmeat ever. But I had seen enough of Nigella Lawson’s Nigellisimas to know how it was supposed to taste. And I am pleased to report that madam Lawson herself would laud the restaurant’s crabmeat fried rice. Dotted with the pink-tinged shreds, the dish was further prettified (and made tastier) by the yellow bits of fried egg in it. As for the pan-fried noodles with shredded chicken in chili black bean sauce, they had all the pan-fried saucy goodness they promised.

Sometime during the meal, I realized I had lost my companion to a pomfret that seemed spicy and in possession of all his attention. He returned to the conversation when the chili sauce took its full form, but the slightest dip, another bite of the braised fish, and bam! He was gone. It was love at Chilli braised pomfret with chili paste. I can confidently say I’d return here to try the Charcoal Grilled-s or Robatayaki (between you and me, I already have my eye on the Tsukune or Chicken ball skewer and Pork belly skewer or Buta Bara Kushi Yaki)! Also, it is adorable how the place lists teeny alphabets on the bottom of their menu, with ‘T’ for ‘Tenderloin’ and ‘H’ for heart-smart foods, not a common thing among Indian establishments. 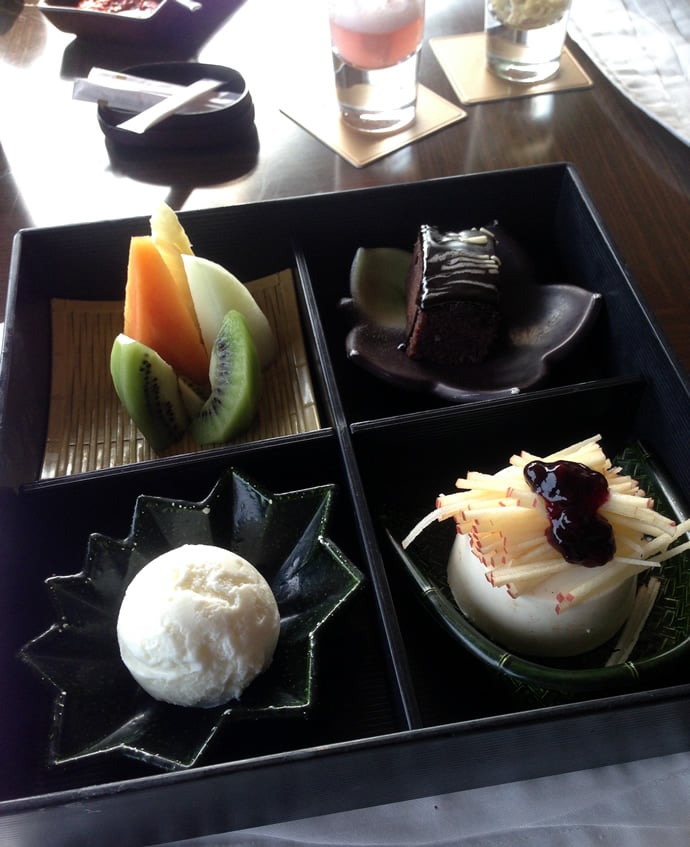 Nor is the dessert bento box that presented a delectable assortment in true Japanese lunchbox form, of a fruit-fort, a dense panna cotta made better by its hat of shredded apple, classic vanilla ice cream and gooey brownie (I almost choked on the brownie when the server asked if we’d like anything else.) In retrospect, I am amazed at how much two people devoured together. Then again, it’s what happens when you combine delectable dishes, amazing ambiance, and superlative service- no matter how fulfilled (and filled) you leave, you always want to return for something else.