Right next to Shanghai’s or should I say China’s most renowned building the Pearl TV tower is the Pudong Shangri-La. It was the first luxury hotel in the area when it opened its doors 15 years ago and just like the Chinese economy the hotel has grown by leaps and bounds. As of now this twin tower hotel has an astonishing 952 rooms and suites. 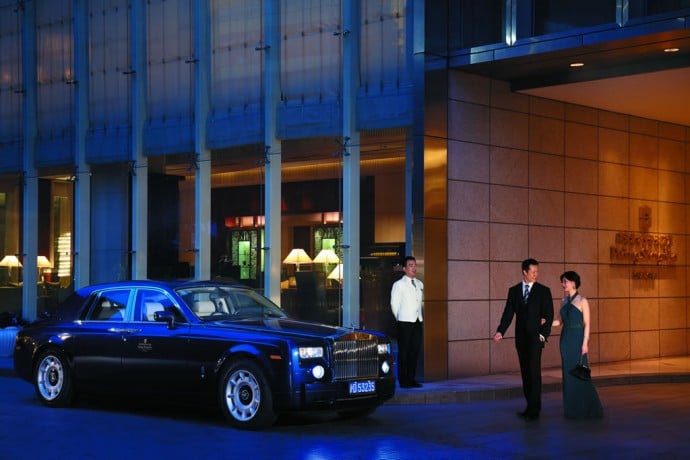 First impressions –
What better way to arrive to a hotel on Shanghai’s futuristic Pudong district then on a chauffeur driven Rolls Royce Phantom. The Electric Blue colored Phantom turned heads everywhere it went. The ultra luxurious ride had its own Wifi network but I decided to give the Internet a skip in a bid to catch the dizzying skyscrapers of the financial district. After a 20 minute ride from the Bund we arrived at the hotel we arrived at the lobby of the River Wing which is the older part of the hotel. Clad in marble with high ceilings the River Wing has a family oriented atmosphere with a traditional design. We were escorted to the newer Grand Tower which is more popular with business travellers with its modern and contemporary design.


Rooms accomodation –
High up on the 28th floor our Grand Tower Bund view room from its floor to ceiling windows offered unobstructed and serene views of the Hangpu river and the historic Bund. I paused admiring the view for a quick in-room paperless checkin. Our Horizon Premier Bund view room was spread across 550 sq feet (55 sq.m) and offered separate living, closet and sleeping spaces. The river facing King bed had personalized pillows with our initials sewn on them, these pillow covers made for a very memorable and touching parting gift. Though targeted at business travelers the decor and styling gave a very homely and cosy feeling. Speaking of business there was free Wi-Fi, a well lit working area and a coffee machine for those late night presentations.

It is the only Shangri-La in the world which overlooks a Shangri-La.

Coming back to the view there are not many hotels in the city which would come close to offering such a stunning view. Come sunset the Bund lights up and neon rigged boats ply tourists up and down the Hangpu river making up for a mesmerizing view.

Stocked with L’Occitane amenities the bathroom was equally spacious with Mediterranean styled wash basins and a soaking tub with TV.

Horizon Club –
On the 29th floor of the Grand Tower is the Horizon Club and as the name suggests it is offered to Horizon Rooms and Suites. The Club is effectively divided into dining and working areas which offer unparalleled views of the city. The club serves a basic spread of rotating snacks throughout the day along with hot beverages. The club got a bit busy during the Happy Hours with guests enjoying the best of both worlds – cocktails while viewing an evening in Shanghai. The Horizon floor guests get some interesting perks such as complimentary suit press on arrival, free shoe shines and hot coffee / tea with a wake up call. We were particularly in awe with the staff behind the concierge desk who were very courteous helped us plan the day for sightseeing and even offered some interesting insights on our next destination ‘Beijing’.

Food and drink –
The Pudong Shangri-La is a foodies paradise it houses not four or six but an astounding ten restaurants and bars.I will start with the most popular one, Yi Cafe.


One last perk of the Horizon Floor is that we had complimentary breakfast at the Club or at the renowned Yi Cafe. We decided to try the latter and I must say that it offers one of the most diverse spreads in the city. Having a contemporary design it had 12 live stations with native chefs dishing out the best in Japanese, Indian, Chinese, Western European, Middle Eastern and Malaysian cuisine. The chefs wear the flags of their respective country on their arm and more than eager to make your breakfast an extra special.

Even if you are not staying at the Shangri-La, YiCafe is a must visit for breakfast or meals.

There were colorful salads, noodles, omelettes, fresh fish, exotic fruits, a variety of juices, I could just go on and on. The place is humongous and to make the job of finding the right food easy, the stations are color coded salad is green, seafood blue, and so on. Not to be missed is the dessert counter or should I say station which along with the usual chocolate fountains and pastries also had a DIY soft serve machine with a host of toppings and a colorful candy stall. .

The Club on the other hand offers a very limited choice of breakfast options in comparison in a quaint and relaxed setting. 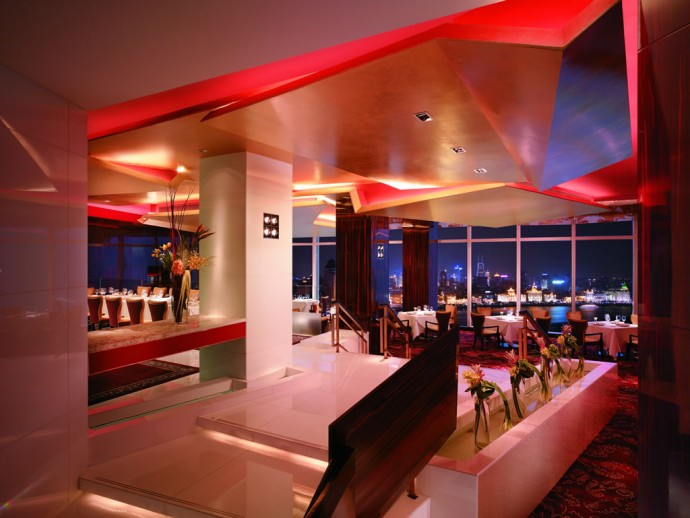 Perched on the 36th floor is the chic Jade on the 36th. Offering an intimate and luxurious dinner setting it serves award winning French cuisine.


There is Nadaman which offers the Choiciest of Japanese cuisine in a contemporary yet modern Japanese setting. For Sushi lovers there is Sushi by Nadaman which serves fresh sushi in an intimate setting.

Popular with the locals are Gui Hua Lou a fine dining Chinese restaurant and Seventh Son which offers fine Cantonese cuisine. Ladies do check out the ‘Sex and the City’ themed cocktails at Jade on the 36th bar. There is also a beautifully decorated wine bar, pastry shop and two lobby lounges.


Facilities –
Keeping in sync with its size the Pudong Shangri-La has two gymnasiums and swimming pools. Unique to a luxury hotel in the heart of the city it also has a tennis court which is complete with flood lights for some evening play. In my case the coach helped me polish my rusty backhand.

CHI is Shangri-La’s own brand spa. focusing on Asian healing techniques and traditions it offers 21 treatments, massages and facials.Spread across an entire floor it has 9 treatment rooms which include a pair of couples treatment rooms.

The Pudong Shangri-La scores top marks when it comes to a premium and convenient location. Step out of the lobby in under 10 minutes of walking you can reach the subway station, Shanghai Ocean Aquarium, two prominent malls, the Oriental Pearl tower, the glass clad Shanghai Apple store (yes, its worth a visit), the Bund sightseeing tunnel and a lot more.

Verdict –
When it comes to size I must admit the Pudong Shangri-La is an unconventional luxury hotel. With close to a 1000 rooms, a plethora of meeting rooms, banquets halls and restaurants it feels like a small town in itself. But the moment you step inside the hotel you are treated with utmost care and the entire staff would go much beyond the extra mile to make you feel comfortable or should I say at home. After our stay we were leaving for Beijing via a high speed train, Railway stations in China can be a bit confusing for first timers and on knowing that the hotel arranged for someone who escorted us into the railway station, helped us with our luggage, dropped us at the train gate and only bid good bye when boarding had started. We were floored by the gesture. This is the level of service you can experience at the entire hotel.

With a host of other hospitality brands entering China and especially Shanghai, the rooms and facilities of the Pudong Shangri-La might feel a bit dated, but the hotel effectively balances it with its premium sevice.

Note – The River Wing Deluxe Bund: 2,300 RMB ($ 380) per night and a one way Rolls Royce costs 4,500 RMB ($ 740) . We were provided complimentary accommodation and services but the the opinions expressed herein are my own.