For long haul flights, such as the Mumbai-Zurich kind, the smallest bump can go a long way. Wider seats equal better sleep, extra-large screens mean more amusement (on the off chance that sleep doesn’t come) and a good breakfast can really help hold off the morning grump. Not to mention, what priority at the airport gate plus allowing more luggage can do to the suggestible ego of the enthusiastic traveller. Which would explain why we were happy to board Air France’s premium economy class, even with the Charles de Gaulle stopover. 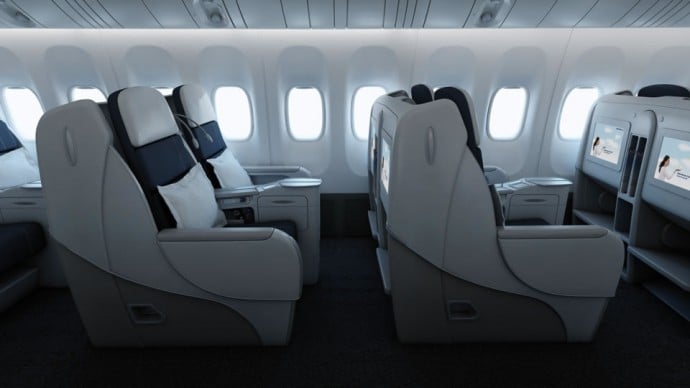 First off, not flying coach is directly proportionate to overall wellbeing.

If you’re anything like us, with so much as an addition of the word ‘premium’ to your ‘economy’ you instantly feel better about your chances of a comfortable travel. Especially if, as in the case of Air France, seats get bigger (width of 19” and a pitch of 38”) screens get wider (an impressive 10.4 inches) and considering our 2.30 a.m. take off, there is enough in-flight entertainment to pacify an insomniac. Let’s just say, watching the Nolan masterpiece Interstellar wearing noise cancelling Sennheiser headphones and sipping on French wine, has never been better. On an alternate note, there’re adjustable reading lights for late-night readers.

Love thy neighbor, but love thy armrest more.

With seats arranged in a 2-2-2 configuration and plied with extra-wide armrests, Premium Economy class on AF’s Airbus A330-200 seemed a wise choice at the time. For a guy who’s 6.2”, I found myself with plenty of room. Only drawback, seats that don’t recline. This makes sleeping a task and sleeping is what we needed to do on our Mumbai-Paris overnight flight. (Although Air France is reportedly upgrading to a new Premium Economy, which has reclining seats). Things began looking up after a hearty breakfast though (Fruit juice, fresh bakery selections, interesting entrée choices including one authentic Indian) and more so after landing and checking in to the Carrier’s business lounge at Charles de Gaulle airport.

Paris-Zurich
After about 4.5 hours of R&R at what is the largest airport lounge in the Air France network, we felt more than ready for the shorter leg of our air journey. The 90-minute duration (and Famille Castel chardonnay) sure helped with the non-reclining nature of our chairs. (Stronger stuff would’ve been welcome but in AF’s premium economy, you’ll find yourself facing a lack of choices). Lunch, however, was more elaborate and complete with macaron, cheese and ‘bien cuite’ baguette. I chose the veg option and got a refreshingly light meal of cous cous, feta and green beans or haricot vert but the menu also offers a choice of chicken or shrimp preparations, not to mention Niçoise salad.

Verdict
As Premium Economy fliers, entering through a shorter, priority line and getting to check 2 bags weighing up to 23 kg / 50 lb. each at no extra charge sure was a boon. We could even carry 2 hand baggage items as well as an accessory, up to a combined total weight of 18 kg / 40 lb. To conclude, that, chic amenities, and the extra legroom and spacious cabin make up for the extra cost. The food however, does need work. It was good, but not exceptional, as you would want to expect from the national carrier of France.

What’s a ‘Premium Economy’ you say? For the uninitiated, it’s a cross between Economy and Business classes. This critic had the Air France Premium Economy experience from Mumbai to Zurich that cost INR 88,981 ($1450) for a round trip.

DISCLOSURE: Air tickets were provided by Air France but the opinions expressed herewith are the critic’s own.

Perched on the edge of Lake Tahoe, this dreamy 8-bedroom mansion has two glass trams…

Expert jeweler enters the Guinness book of records by setting a mind-blowing 24,679 diamonds in…

After opening in New York, The Hermes pop-up gym finds its way to Los Angeles