“Airy Fairy” quite captures this abode. The St James hotel presides over the parks of Paris’s first airport from where the first hot air balloon launched. Hence its “airy” affiliations. And it’s fairy for it is Paris’s only “château” hotel, conceived as the residence of a fairytale 19th century family. Rooms are named after “regular house guests” including Austrian Empress Sissi and the last Queen of Scotland, imagined to be family friends of the imaginary “family”…


In 1892 this address became the Fondation Thiers created in homage of a former French president. For a century it was a hostel for scholars. In a dramatic twist it transformed into an exclusive private club, Le St James, which of late has begun receiving non-members, so it now functions rather schizophrenically as a not-so-exclusive private club that is a very very exclusive hotel. So exclusive that if you didn’t know about it, you wouldn’t, reserved as it is for the elevated echelons of society. And one man ever beats me to the world’s most luxurious hotels and that is the Dalai Lama, who stayed at Le St James, as did Robert de Niro, Whitney Houston etc

Ensconced in the leafy luxuries of the residential 16ème arrondissement, it is removed from the fashion and frenzy of touristy Paris. However, a leisurely 20-minute saunter through verdant avenues brings you to the Arc de Triomphe from where Les Champs Élysées commence. 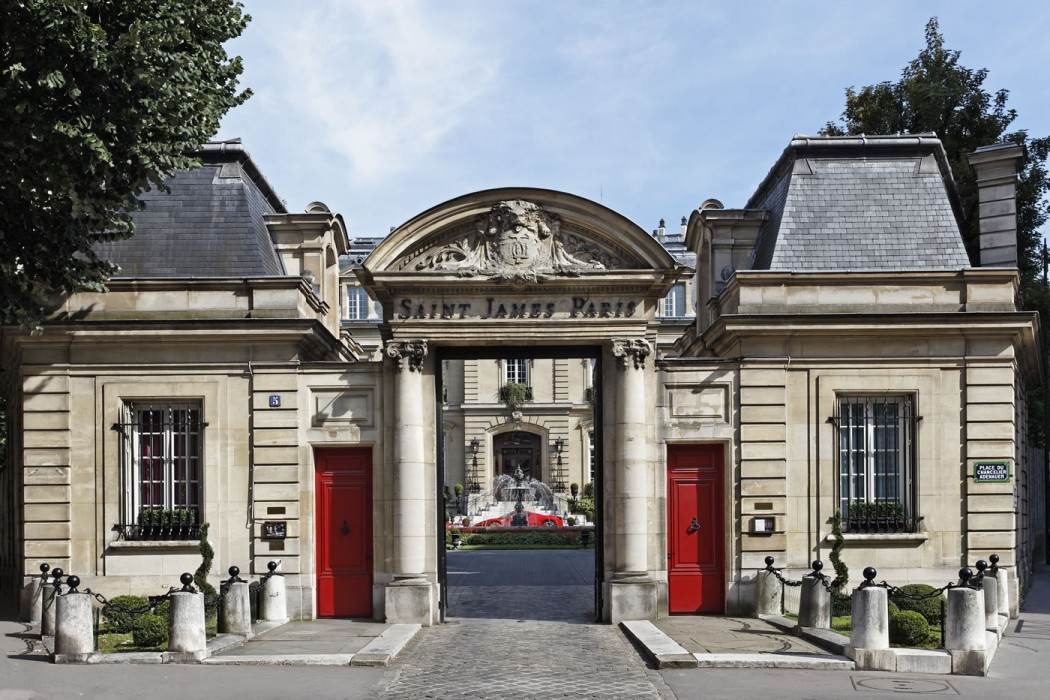 Paris’s only hotel accoutred with its own private parks, Le St James has a stately entrance, upholding the châteauesque aura. Wrought-iron gates fitted in stone walls open to a fountain wreathed in resplendent flowers. The periphery is primly aureoled in groomed verdure. On the gravelled pathway contouring the fountain is a concatenation of the most luxurious cars in all Paris (belonging to club members). The fountain, lit, looks like a golden birdcage at the centre of which the hotel’s front door seemingly sways like a bird as trembles of flowing waters conjure an illusion of lilting.

Through the door and you find yourself voluntarily encaged in these paradisal precincts. Present yourself at Reception and there is immediate recognition, as if the hotel has long known you, long awaited you. A personalised welcome is a privilege Le St James affords given that it has but 49 rooms and no suite of pressed guests queuing to check-in.

Next, Concierge, takes charge of me and my luggage. I’m whisked through a lounge where an erratic cascading chandelier tumbles like bunches of sparkling grapes in front of a grand staircase whose black and white stripes are equally arbitrary. There’s something magical about this place and I’m anticipating a magic carpet will manifest to transport me to my room, such are the transports of fancy here. But we opt for the more conventional lift wallpapered in rising hot air balloons evoking the establishment’s origins. The same wallpaper is on another staircase opposite the lift which accentuates the feeling of ascent. Swaying on the staircase is a nimble hot air balloon of a chandelier. The tongue-in-cheek decorative details are pervasive.

The concierge himself has a lithe breeziness about him as he conducts a thorough room orientation. He’s as comely as my suite (another particularity of Le St James is it seems to hand-pick dapper, dashing men as concierge). And no, I don’t request a portable radiator only to have one of these handsome fellows dispatched anew. But my suite with living room is enormous and being in a historic edifice little lends itself to warming.

Bathrooms all in pearl grey marble, ornate fittings and antique sink-bearing stand I adore. It is quickly intimated me that Le St James dispenses Guerlain toiletries in their bathrooms, a luxury that even the Mandarin Oriental Paris hasn’t, its Guerlain Spa notwithstanding. There’s a curtained marble bathtub which flouting modern conveniences omits an overhead shower, restricting itself in almost wanton fidelity to whimsical feminine style to a less convenient hand shower alone. But with redolent Guerlain ablutions to soak in, who showers seems the retort.

What’s in a name? Interesting people have interesting names and with a name like Bambi the designer cannot but be a curious creature. The sort to concoct style “Crazy Chic” for Le St James. Bambi Sloan, Franco-American, of London’s Harry’s Bar fame. Expect the unexpected as fanciful suites like 508 pulsating with green suggests a tropical jungle. It’s equipped with a glass-roofed winter garden reminiscent of late 19th Century bourgeois houses, the hotel’s decor a revival of this period filtered through Bambi’s singular eye.

Despite the swinging fluidity of the decor and swivelling idiosyncratic panache, the decor never spirals into vulgar kitsch or asphyxiating OTT, Bambi’s training at Paris’s fabled Beaux Arts and Arts Décor ensuring an all-encompassing elegance reigns tightly over the caprices of colour and styles. However, eccentric requirements of regular guests have also been accommodated into their favourite rooms!

Nobody in Paris does breakfast like Le St James. In the loveliest of dining rooms sink into lavish red and gold striped armchairs overlooking lush lawns with a hot air balloon for a pavilion. Relish freshly squeezed juices that bring you the vitality of an orchard and cut fruit prettily in little glasses (there’s golden mango in winter!). Breads from famous baker Balthazar smarten the buffet but Le St James is amongst the only places that has tables dressed with a basket burgeoning with delicate homemade viennoiserie. Explore their homemade jams too. Wish muesli were homemade. There’s select dry fruit, cheeses, cold cuts and the coffee is amongst the only drinkable in Paris. Service, so graciously and quintessentially Parisian, is as classy as the breakfast and the decor. Naturally, signet-ringed club members frequent and gallantly greet you even if they don’t know you- change from clinical 5-Star impersonality. I’d stay at Le St James if only to wake up to this breakfast.

The restaurant turns by night into a Michelin-Starred restaurant. Le St James is all about play, whether in its playful decor or its theatricality, and if by morning the stage is the hot-air-ballooned garden terrace, by night the dining room becomes the stage watched on by the myriad portraits streaking the unusual ink-back walls. Before this exalted audience, Virginie Basselot (incidentally, Paris’s only female chef to be “Meilleur Ouvrier de France”) who has worked with Dominique Boucher at Le Crillon, Guy Martin at Le Grand Vefour and Le Bristol’s Eric Frechon whose second she was when he acquired his third Michelin Star brings a femininity to the menu and revives des “légumes oubliés” or vegetables of yore that the young sommelier pairs well with fine wines. Stealing the show, however, is a fat black cat Le St James’s live-in feline phenomenon that has featured in stories on the hotel. But the real star is the exquisite service headed by charming Maître D David. When supper terminates, if you’ve been good, David comes to gift you a little bottle of homemade jam.

The St James’ bar is another story. It’s the erstwhile library of the hostel showcasing beautiful leather-bound books and has dark wood-panneling, dim lighting and large windows framing the garden. The carpet is like a flayed leopard stretching to infinity, imparting a wild exoticism to the decorative cocktail of this enclave so suave and sophisticated, with a clientele equally so (no Americans twanging away loudly, guests being mostly club members, and quietly French). I judge a bar by its nuts, for crisp nuts establish quality consciousness and attention to detail to which cool cocktails are a natural corollary. Le St James’ spiced nuts and cocktail accompaniments are superb, their champagne cocktails crafty. This veloured and discreet lounge bar to me is Paris’s most inebriating.

“Concierge” is a French word and in Paris the concierge service is an accomplished art and Le St James has perfected it. It’s the perfect mélange of quirky charisma, spry graciousness, and wily wit. Felicitating the head concierge, who has been around aeons, on the service I ask him his name. He quips, “If you’re writing good things, my name is Christophe. If bad things, my name is Nicolas,” winking at the Sales Manager Nicolas passing by then.

I’m overwhelmed by the faultless service. Until, at departure, checking that all my bags have been loaded I notice a red Plaza Athénée bag with pastries and chocolate missing. It transpires that the bag the housekeeper discarded, having taken it upon herself to decide its contents unsuitable for consumption… I’m displeased, especially at the inconsistent housekeeping- during my sojourn, my clothes were left slumped around, crumpled wrappers by my bedside uncleared, the explanation being they don’t to fiddle with guests’ personnel belongings. Then why remove a chocolate-filled bag? Creditably, an expeditious investigation is effected and I’m gifted a box of Maison du Chocolat chocolate. I’d rather not elide a point for this ultimate lapse except that a guest might’ve lost something irreplaceable.

Le St James is about the lunacy of luxury or the luxury of lunacy. The location, like the decor, is slightly décalé or awry but location matters little because when at Le St James’ you never want to step out!

Note – I was hosted at The St James Paris but the opinions expressed herewith are my own.