Desirably on the secluded, silvered sands of southern Mauritius’s unspoilt expanses this latest addition to the island’s luxury offerings is perhaps its most glamorous. The resort looks like a heritage building titivated. Would you believe what seems a colonial construct is a clever recreation of colonial splendour?


Accommodation: Get yourself a water’s-edge Beachfront Deluxe Room and lap the views as white-sand beaches stretch like a pair of fine legs before the untarnished blue (only in South Mauritius). The resort intends the at-a-friend’s-manoir feel. Hence, the ample rooms bear no “hotel-esque” brochures etc. However, they do stock the glossy mags I contribute to which my friends’ homes wouldn’t (one’s friends are more philosophical, one would like to think…). On the other hand, my friends are mad enough to have desks inside bathrooms and that’s perhaps the feature of these quietly elegant rooms in soft maritime colours that most appeal to me as indeed the equal allocation of space to terrace, bedroom and bathroom. Nice. Nicer are the frivolous bedtime mignardises brought you at turn-down by your personal butler. Personalised butler service, with a mobile-brandishing butler who can co-ordinate your entire stay, is amongst the resort’s ultra-luxe features. The rooms are lovely but you are intended to spend less time in them and more time meandering the resort’s waterways, exploring its many culinary delights or quite simply languishing on its white sands that you can access directly from the strategically positioned water-facing villas. On the other hand, lounging on the villa’s wide terraces can be just as delicious. 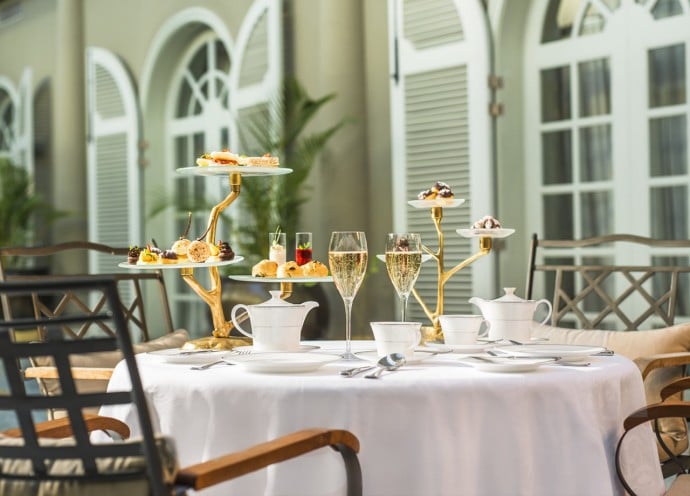 F&B: My Air Mauritius flight anticipates Destination Dégustation. Lush fruit splashes painted cabin partitions, depicting the island’s bounty. And exceptional on-board cuisine is a prelude to a fabulous fiesta pervading the island and attaining its apogee at the St Regis.

I was fortunate enough when the hotel launched to be hosted by the wildly charismatic aristocratic GM Bernard de Villède whose witticisms charm utterly. Whilst M de Villède has now moved to St Regis Mexico City (he gets around), his legacy remains as do chefs he has extorted from France’s most prestigious three-Michelin-starred restaurants and installed in the resort’s kitchens so that the St Regis catapulted within weeks of opening to culinary heights. Indeed, the resort is now a culinary landmark what with the inspired dining option Inspiration.

Chef Exécutif Olivier Belliard enquires what I fancy. French haute-gastronomie! “That doesn’t challenge a Frenchman,” he laughs (especially one trained by Michel Rostang). “But Frenchmen, except top three-Michelin-starred chefs, haven’t quite mastered Italian cuisine,” I tease. So we’re finalising an Italian dégustation when I also want a dash of Mauritian haute-gastronomie. That’s challenging- Mauritian cuisine, wonderful though, hasn’t pretensions and Mauritian “haute-gastronomie” is rather a contradiction in terms.

The feast unfurls as three French chefs avail themselves admirably of Mauritian elements that are Frenchified or subtly implemented in Italian dishes. This is to be not just an elaboration but a rarefaction of Mauritian cuisine culminating in epicurean pinnacles. First come beignets bearing pert black truffle roundels, then comes Executive Sous-Chef Sébastien Le Galle, once three-Michelin-starred Olivier Roellinger’s sous-chef and three-Michelin-starred Jean-George Vongerichten’s chef de cuisine. I muse the truffles seem to have wondered onto my plate straight from France. Chef beams, “Mais Oui!” This passionate 32-year-old next dispatches firm and flavoursome avocado sprightly with Mauritian ginger-radish drizzle. The next course, “St Regis gâteau piment,” demonstrates how Mauritian masala vada may be fashioned into a little round of luxury poised atop cubed tomato paté. Ravishingly delicate raviole like a silken pouch confirms a master craftsman’s touch. Then, signature palm-heart salad that pervades every Creole restaurant here assumes gourmet stature, lemon-braised and embellished with pequillos and roasted hazelnuts. Enfin, gnocchi in lush local pumpkin purée. Then, the eminently adorable young Chef-Pâtissier Jerome Castellani, picked from Alain Ducasse’s fabled three-Michelin-starred Le Louis XV in Monte-Carlo, brings tropical citrus-studded litchi jelly with pineapple sorbet and petits fours including chocolate globes enclosing molten salted caramel. Accompanied by coffee is the finest amaretti this side of Milan. Exiguous portions might vex the less abstemious… 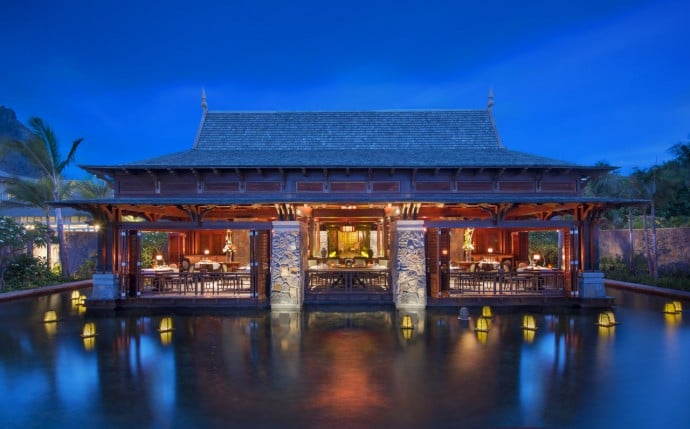 The resort’s show-stopper perhaps is the Pan-Asian restaurant
Floating Market: Entrancingly oriental, lapped in lotus ponds. “Quite possibly the most atmospheric restaurant in all Mauritius,” I tell the young sommelier. “The toilets are even prettier,” he says. I might’ve spent the evening in them but Chef Yasunori Iwata has planned otherwise. “I don’t like Japanese food,” I’m emphatic and request Vietnamese or Thai food. But Chef happens to be Japanese and has already designed my menu for I happen to be vegetarian and there’s nothing vegetarian at the Pan-Asian restaurant. I’m resigned to my fate and my plate but have an inkling that this reticent little gentleman’s razor-sharp precision will cut the mustard, as it were. 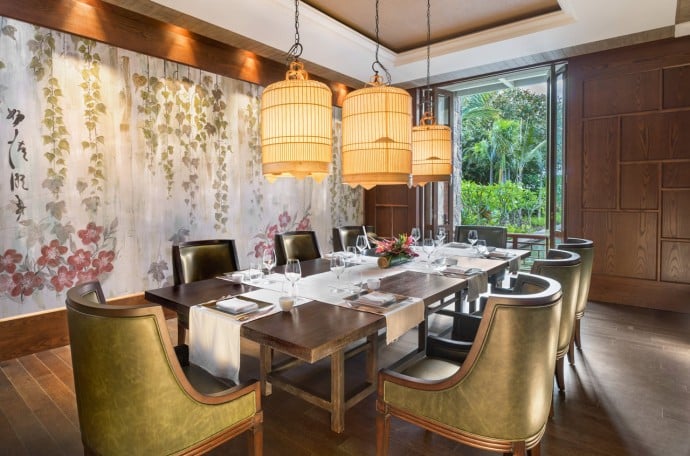 The matinee show alone leaves something to be desired- al fresco breakfasts by the sprawling and sensational pool or on the lawns are better for the setting than the culinary offerings compared to other Mauritian resorts. But that’s all the more reason to avail of Chef Jérôme’s afternoon tea. Both the French and the British colonised Mauritius and British colonialism revives in the charming Conservatory. Excepting homemade strawberry jam that lavishes like a fine crimson robe over scones, Jérôme’s three-tiered-platter is mercifully French and fine. Dainty pistachio financiers seemingly float and tea too is an exclusive French brand. “On est à Maurice, on parle français,” I’m vociferating that I’m weary of English and the English, and just as I’m merrily deriding the British, celebrating the French our flamboyant French GM makes a dramatic entrée, dispenses witticisms, and waltzes out with his wife, who happens to be English. No, I’m not expected to eat my words for denigrating the Brits, so I help myself to yet another prissy profiterole swirled around sumptuous chocolate cream.

As the sun sets, the poised orange with a dusky cloud strewn across evokes Chef Jerome’s orange macaron exuding a chocolate centre. The desserts in Mauritius mightn’t widen the waistline, but they do stretch the imagination.

Spa: No less compelling than the cuisine is the Iridium Spa that occupies an immense stand-alone building. Enter this ultra exclusive space where chi-chi Swiss Valmont products are showcased in cabinets whose doors look like those to a ballroom entrance. But all the waltzing takes place upstairs in stunner therapy suites, some with their own private terraces. Ask for Teheseen who does fabulous facials and exhibits tremendous technique with her nuanced massages. She is also one of the few therapists who doesn’t try to peddle you products during treatments…

Excursions: The resort orchestrates shuttles to Mauritius’s natural geological sites and verdant interiors, including a visit to the fabled La Rhumerie where you see rum being made and stay on for the loveliest of lunches. 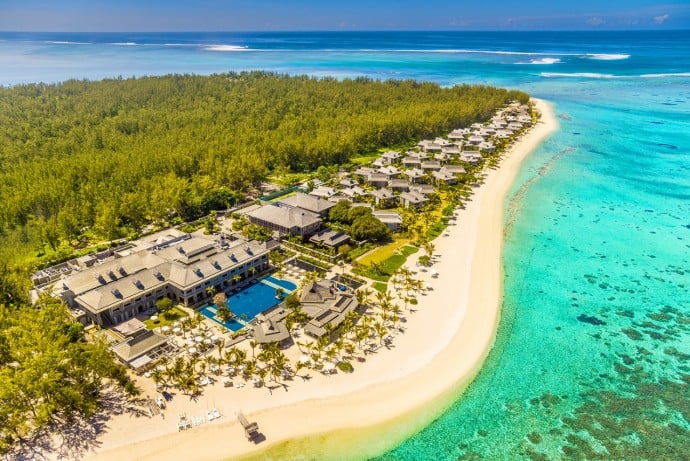 Verdict: Perhaps the best located resort in Mauritius for those who seek bleached sands and serenity coupled with swift access to attractions in central Mauritius that an efficient shuttle service furnishes. The resort is a culinary haven for the gourmet gallivanter. Service is slick, if sometimes supererogatory when butlers become invasive in their enthusiasm to please.