When it comes to luxury Raffles as a brand is always held in high esteem. So when they opened a resort on an idyllic island in the Maldivies we had to check it out. My first interaction with the property started with an extensive questionnaire that asked a host of my preferences right from the fragrance in the villa to the softness of the pillows to my preference of a hot drink to start the day and more to make me feel at home away from home. After a 50 minute flight from Male, I was at Kaadedhdhoo airport where the staff from the Raffles Maldives quickly whisked me away to their speedboat. While transfers are mundane this was one was memorable as I had a personal masseuse. A whiff of refreshing aroma oils and a head /shoulder massage made me forget the long trip from Mumbai. A few minutes in and we were at the arrival dock – white sands, the bluest of water and some traditional music welcomed me to the brand new Raffles Maldives.

The Story
There’s no sin in seeking solitude by the sea, away from the throngs and thoroughfares. I sought out a few days of reclusion in the Maldives and The Raffles was my sanctuary of choice. With a fair picking of just 20 beach villas and over-water villas that make up the property, this floating fairyland of minimalist luxury had a magnetic appeal, even through pictures.

Situated 400 kilometers away from Male, the resort seemed to be quite empty during the reopening months that I lived there, giving me the joy of exploring a nearly-empty island to explore. Situated in the Gaafu Alifu Atoll reef, the backdrop of the resort is a turquoise canvas over which the villas sit, neatly connected. The property can be reached only via a speedboat. The entirety of the Meradhoo island can be covered on foot in ten minutes, and the soft white sand between your toes and breezy sea air lifting your spirits is the reward. 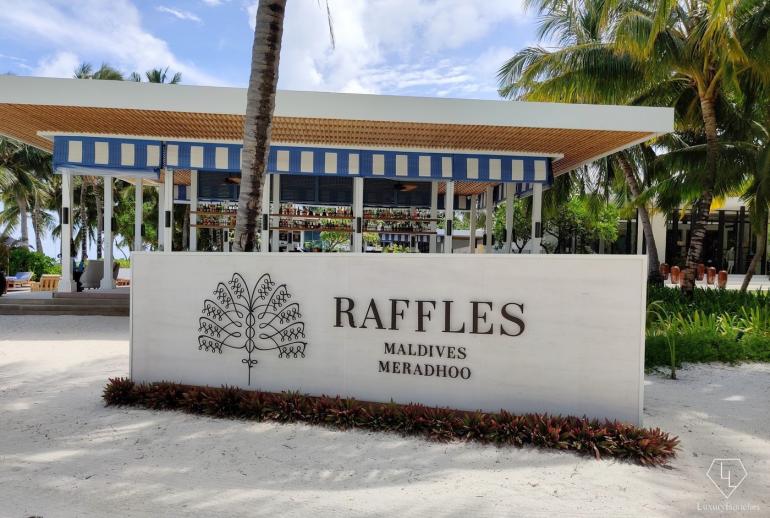 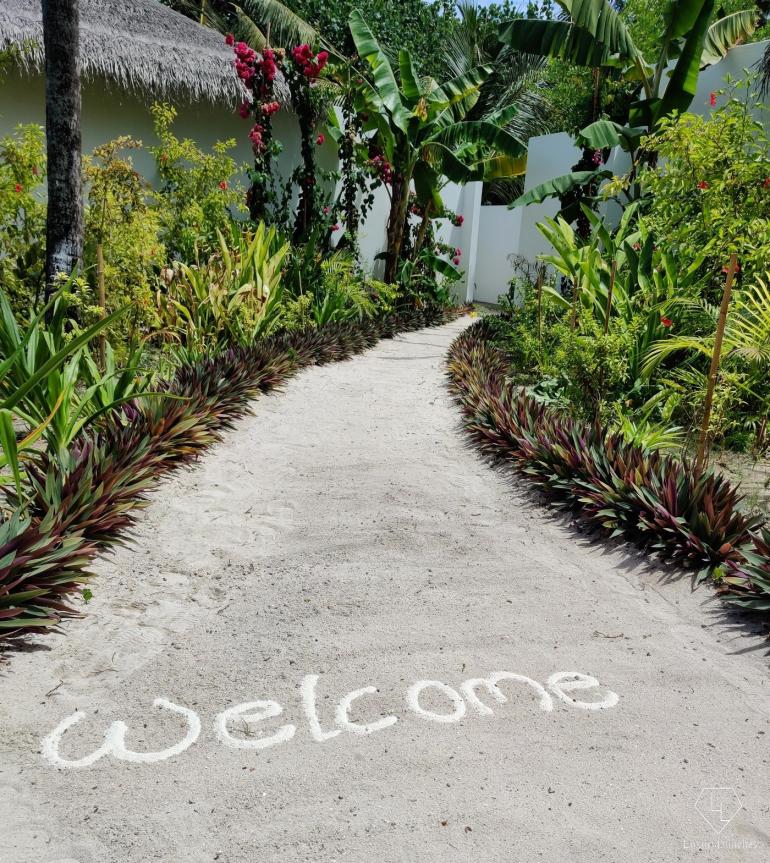 The Abode:
I was put up in a spacious 260-meter Deluxe Beach Villa. The first thing to catch my eye was the super king bed and the massive bathing area. The massive room can accommodate four people and has its own study area, a walk-in wardrobe, and an oversized sunken bathtub. More importantly, you have a portion of the beach all to yourself, where the restaurant staff led by your butler can lay out one of the most enchanting private dining experiences for you. 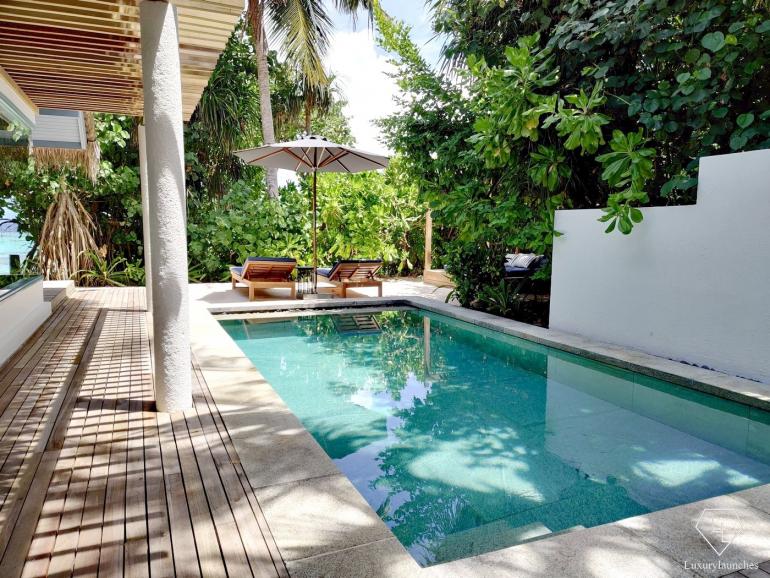 The rooms are airy with large windows and furnishings that feel warmly lived-in, unlike the overdone luxurious suites you’d find in a city hotel. A 55-inch LED TV and high-end audio setup keeps you entertained while the family can relax in the private pool or simply sack-out by the beach. 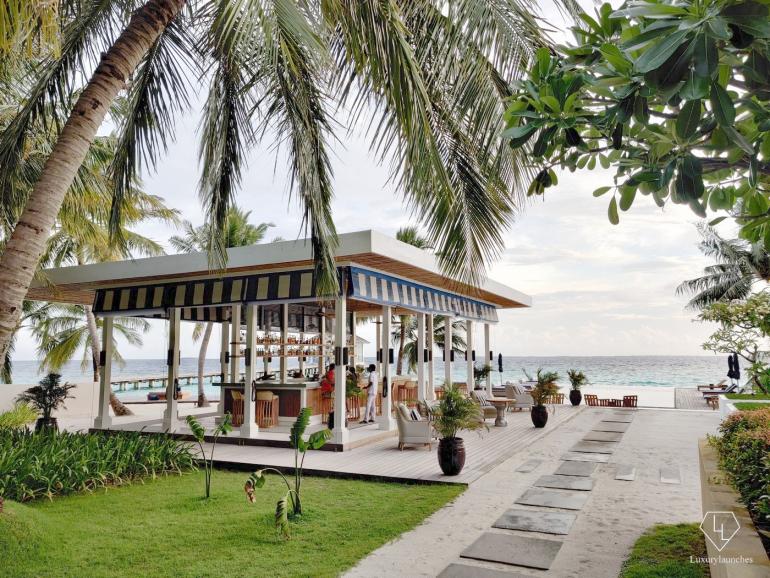 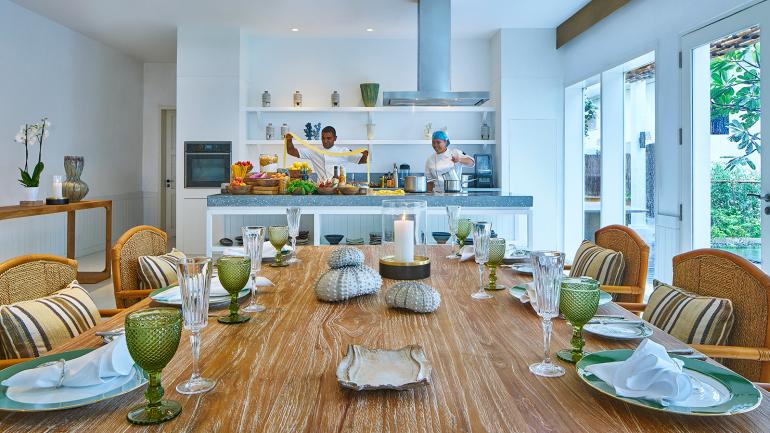 The Food and Drinks:
For a property that small, you would find an impressive spread of gastronomic choices on offer at the Raffles. If you aren’t one for all-day in-villa dining then you can venture out to the Thari and enjoy its scrumptious breakfast spread and themed dinner nights where you can enjoy informal dining, while facing the sea. The Firepit celebrates cooking over the flames with its impressive portfolio of barbeque preparations. The Raffles is also home to Yuzu, Nikkei cuisine that blends Peruvian flavors with flavors from Spain, Italy, China and Japan. 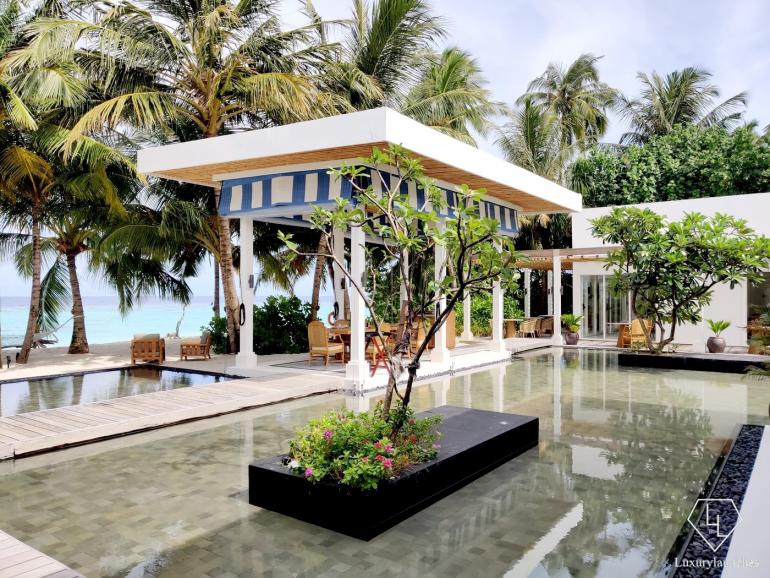 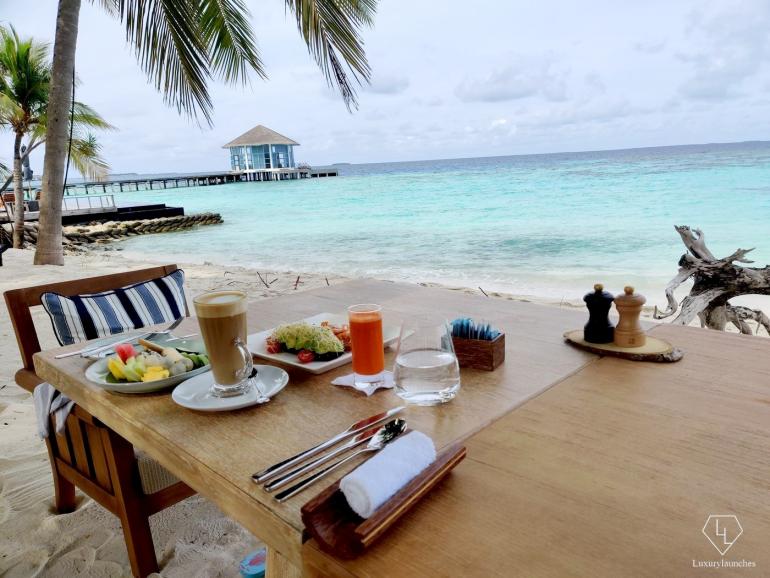 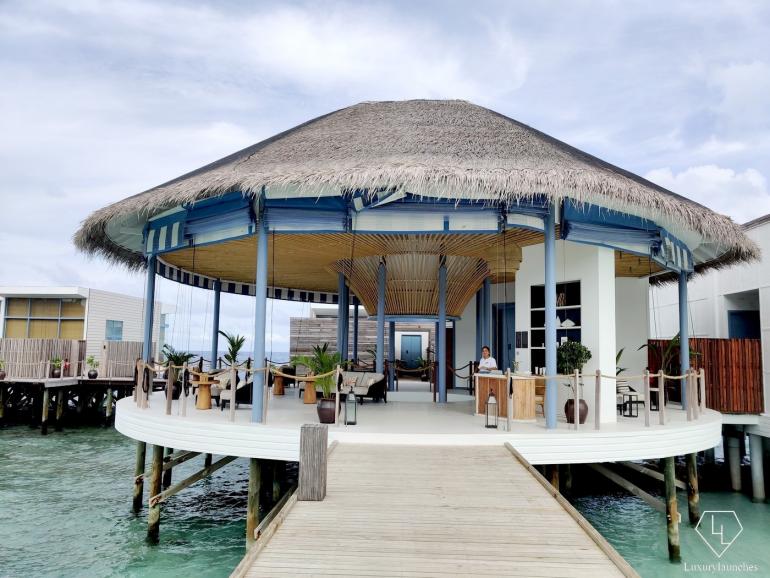 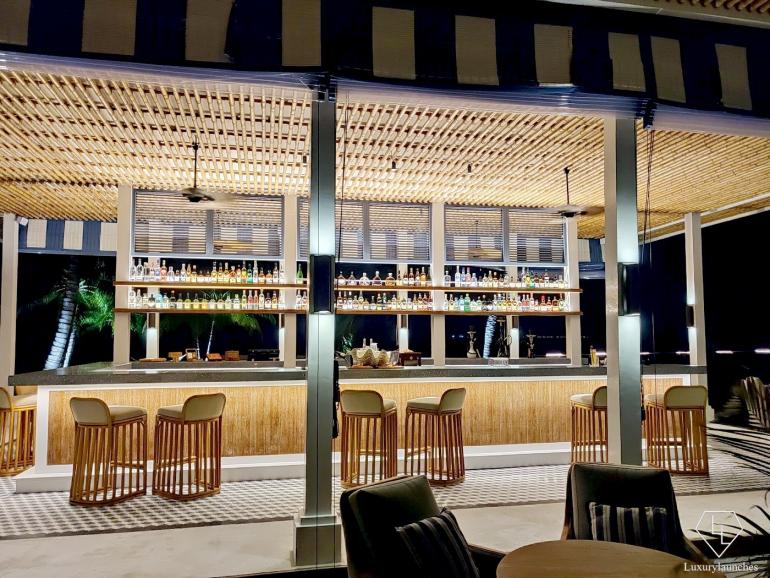 My place of choice for the evenings was the Long Bar, where the best champagnes were served. This bar is reminiscent of the main Long Bar that has earned its fame at the Singapore Raffles. Settle down here and watch the shades of the evening paint the sky amid great company and conversations.

The Hospitality:
Right from the moment I arrived till my departure and every experience in between, the staff portrayed their warm and accommodating demeanour, which is one of the most enriching experiences from the time I spent here. The dedicated butler was always on call and almost magically appeared each time we called for him. Everyone from the marine biologist to the cleaning crew wore kindly expressions and could communicate with us efficiently.

The Noteworthy:
My favourite area remains the hotel pool, where I could take in some of the best sunsets of my life. The villa is cosy, without seeming too large a space to live in, even if it’s just two people occupying it. Amidst the luxuries, savoury delights and spectacular views of the ocean, Raffles Maldives plays host to some of the most exquisite and endangered dwellers of the deep. You can take a dip with 20 resident turtles, under the guidance of in-house Marine Biologist, Sonia Valladares. In all my visits to the Maldives, I have never had the opportunity to get up close to a magnificent Hawkbill turtle, in its natural habitat. Each of the turtles is tagged and labeled to keep their population and health in check. The corals are home to a number of other species of marine life, especially clownfish. The turtles are habituated to human presence in their habitat and swim incredibly close to swimmers. Many tourists, like me, find this to be an endearing activity. Eco-tourism should be promoted by resorts and properties the world over.

The Summary:
The Meradhoo islands are small, yet, with the Raffles Maldives spreading across its watery façade, the entire topography of the land gets a facelift. The property is ideal for a romantic couple. Taking children along may not be the best idea because of the lack of dedicated areas to keep their easily-bored minds entertained, in the middle of the ocean. It does very well to ensure that every comfort promised to you is delivered and that it will be one of the better places you have travelled to, for a long time.

Note– The critic was invited by the hotel. But all the opinions expressed herewith are her own.