In Detroit next month at the North American International Auto Show, Cadillac will unveil the third-generation of the CTS-V. The automaker has given a sneak preview of what is to be the most powerful car in Cadillac’s 112-year history. Under the hood, the 2016 Cadillac CTS-V sports a supercharged 6.2L V-8 engine. It is tuned to 640 horsepower and 630 pound-feet of torque, that’s 10hp and 20 lb-ft less than the monstrous Corvette Z06, which is enough to propels it from 0-60mph in 3.7 seconds and hit a top speed of 200mph. The engine is linked to an eight-speed automatic transmission with paddle shifters. That’s not all; in fact, the new CTS-V packs the very best of what’s possible at Cadillac. 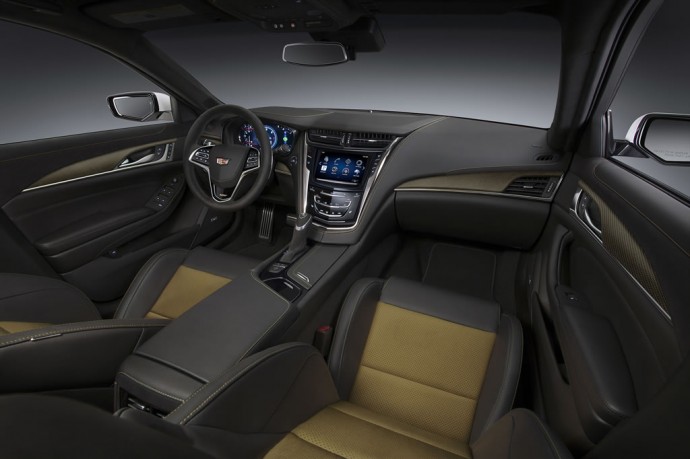 Along with being more powerful, the 2016 Cadillac CTS-V is about 100 pounds lighter and nimbler than its predecessor. It also features launch control and performance algorithm shifting to ensure it can put all that power to the ground with the most precision and poise possible. V-series represents the very best of the Cadillac brand – the pinnacle of our design and technical capabilities,’ said Johan de Nysschen, Cadillac president. ‘The new CTS-V is the most compelling example of Cadillac’s product substance and brand trajectory. The 2016 CTS-V has a track-honed design, chassis and suspension to complement its racing ability. Its carbon fiber hood, vent, front splitter, rear spoiler and rear diffuser combined with its structural stiffness that has been increased by 25%, provides an improved ride, handling and aerodynamic competence. The car also features three driver-selectable modes; touring, sport and circuit driving, and a brembo high-performance brake system that was developed to provide durability, consistency and racing capability. The CTS-V will launch later next year, following the debut of the smaller ATS-V. The pricing is yet to be announced.