Most mid-engine supercars usually come with a glass engine cover that offers a sneak peek of the beastly power plant hiding inside – a trend that was popularized by Ferrari. What will be your reaction when you find circuit boards and graphic cards wrapped in a bunch of wires instead of a beautifully crafted V12 engine? Puzzled, maybe? Well, someone has fitted the rear trunk of a BMW i8 hybrid sports car with a crypto mining rig “just to annoy gamers.” I won’t be surprised if he manages to ruffle some feathers in the car lover community. The crypto mining rig on wheels is owned by bitcoin entrepreneur Simon Byrne who has made a fortune off the cryptocurrency. He’s the same guy who went viral on the internet last month for building one of the craziest mining farms made of 78 PNY GeForce RTX 3080 graphics cards. It is said to be capable of generating a profit of $128,088 per year. Just in case you aren’t aware of it, GeForce RTX 3080 is Nvidia’s flagship GPU, and there’s a huge shortage of supply in the market with gamers across the world eagerly waiting for the graphic card to be restocked. No doubt gamers won’t be thrilled. 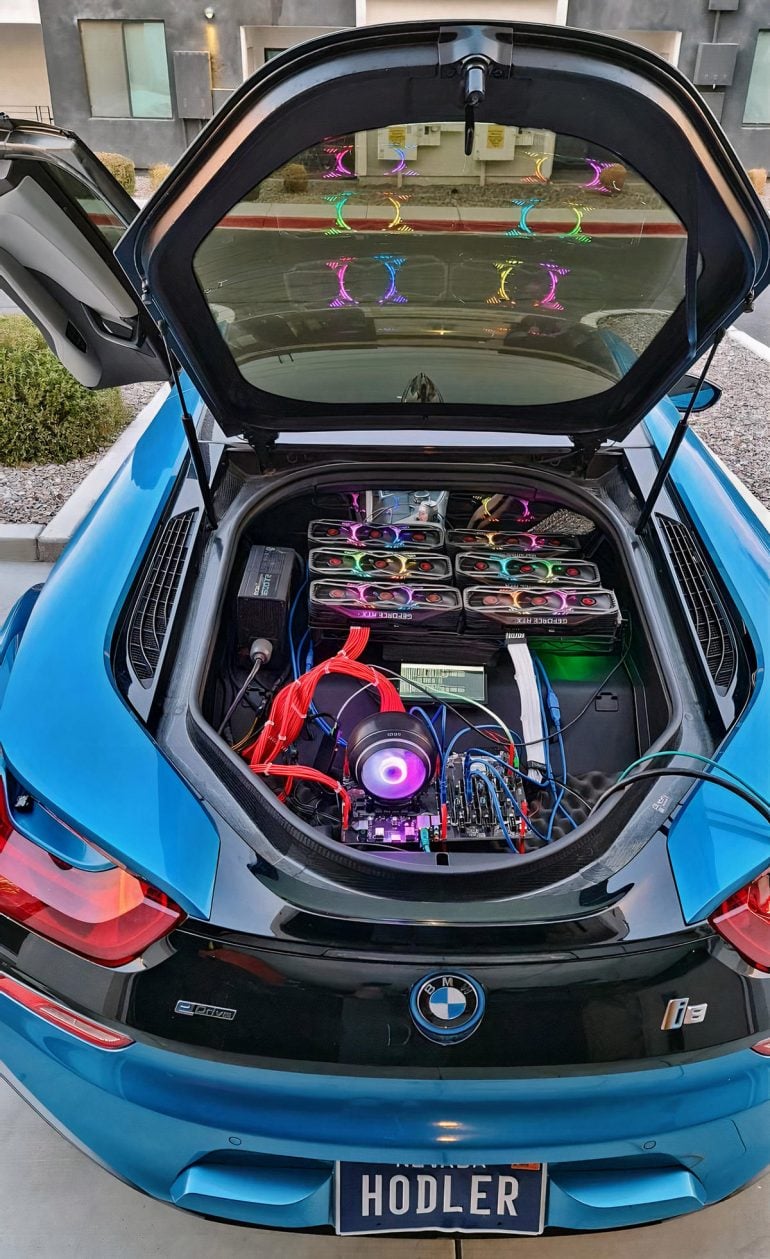 Coming back to the supercar mining rig, Byrne fitted six Nvidia RTX 3080s into his BMW i8. The crypto-miner said that he’s trying to build a cryptocurrency ‘utopia’. The BMW that nearly costs $150,000 wears a Nevada license plate that reads ‘HODLER’ – term for cryptocurrency holders. Byrne told Tom’s Hardware that the hybrid’s battery pack is powerful enough to run the mobile mining rig. The i8 can output up to 3500W from its main outlet, and the rig needs 1500W to run. But who won’t want to own a car that makes money for them, even when it’s parked? However, there’s an issue. The lid has to remain open, or else the whole thing overheats. The BMW i8 debuted back in 2013, and the production run of the hybrid sports car ended last year. It is equipped with a relatively small 7.1 kWh lithium-ion battery pack and has a combined output of 369 horsepower, which can propel it from zero to 62mph in 4.4 seconds.

Tags from the story
Bitcoin, BMW