I genuinely feel happy in the stunning and striking BMW i8. Dresses, bags, and pumps are no longer needed with this supercar. The road is the red carpet and the BMW i8, my most fabulous outfit. 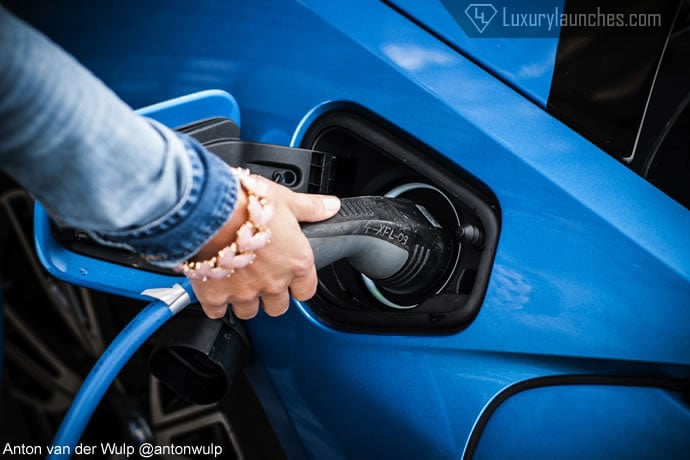 Plug-in hybrid
The BMW i8 is the first plug-in hybrid from BMW. It is a sports coupe with a plug-in and a fuel tank, whereas the wheels are driven by an electric motor and a combustion engine. The Germans already made the BMW i3, however, that one is fully electric. The internal combustion engine of the i8 is situated in the middle and that’s also the reason why there is so little space in the trunk to transport your shop trophies. 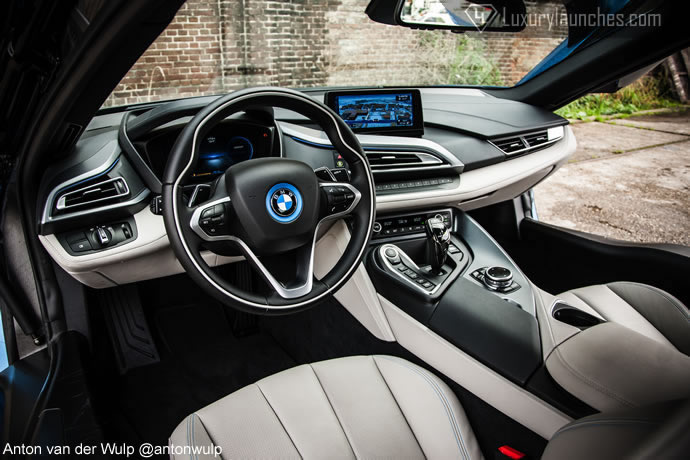 Three cylinders
This hybrid sports coupe only has three cylinders. Not eight ?! Not ten ?! No. We nostalgically look back to the noisy and oily Jaguar F-TYPE R Coupe. However, don’t be mistaken; the i8 delivers 231 hp from its mere three-cylinder 1.5 petrol engine block! And if the old-school combustion engine leaves it hanging, the electric motor (131 hps) will jump right in for that extra kick. The combination gives a total power of 362 hps and launches me from 0 to 60 mph in 4.4 seconds. You don’t only feel that; you can also hear it.

BMW has given the i8 its own signature sound, which sounds great, civilized, and gives a loud growl when you’re pulling up from sport mode. It’s a cool sound, including crazy puffs when down-shifting with the paddles on the steering wheel. Strangely enough, this artificial sound is quite addictive.

Meet the Kardashians
To keep the BMW i8 fit and light, BMW used carbon fiber. It only weighs about 1490 kilograms. However, these nimble plug on wheels arent very functional. Parking is a disaster, and no, not because I am a woman! It is because of the wide and round Kim Kardashian hips with downward air intake for extra aerodynamics. The wing doors take up a lot of space when you open them. Before you know it, you cannot show off your i8 because your neighbor has parked (= less than half a meter) his car next to your precious. Furthermore, please put on your most comfortable home suit for a ride in this BMW. That has all to do with the getting in and out the procedure of the BMW i8. It’s a real challenge! Especially if you are tall or wearing an outfit that is a little to tight. The bump on the head of my XL photographer is still glowing. And as my colleague realized, getting in and out of this beauty can be a daunting task with tight jeans. The space in the trunk is a joke. There is room for at most two shoe boxes and a few charging plugs. In the back there is a place for an extra handbag but surely not for passengers. But once seated in the cocoon of the BMW i8, it is so fine to linger that I will never get out of it. The soft leather seats hug me as a dear friend.

Shopping at Bloomingdales suddenly seems so overrated; driving is the only thing that counts. 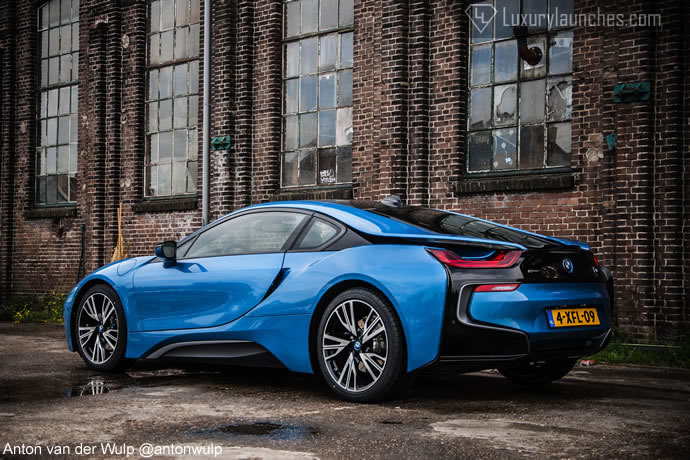 Instinctively, the i8 gives me the feeling of riding in a fast GT and not in a very fast, brutal sportscar.

A sprint with a fully electric car like the Tesla Model S was just won by the BMW i8.

That narrow difference in acceleration is due to the “plugin-hybrid complex” of the BMW i8, which acts as a sort of left and right brains: the electric motor (= left brain) is first present when I flick the throttle. Then followed by a kick-ass electro shot from the turbo petrol engine (= right brain) of the BMW. And precisely this transition from the left to the right brain, that little bit of extra “thinking” is that tiny difference with a Tesla Model S when making a fast sprint from 0 to 60. Doing donuts and drifting is almost mission impossible because of the ESP in the BMW i8. You get a bit of understeer and then slip a bit on the front wheels when I take tight corners with too high speed.

The i8 runs like a dream on the highway – fast and smooth. In the city, the ride is a bit bumpy as the hard suspension takes over cobblestones and manhole covers. It literally shines as amazed onlookers ogle it when doing slow motion speeds at the boulevard. 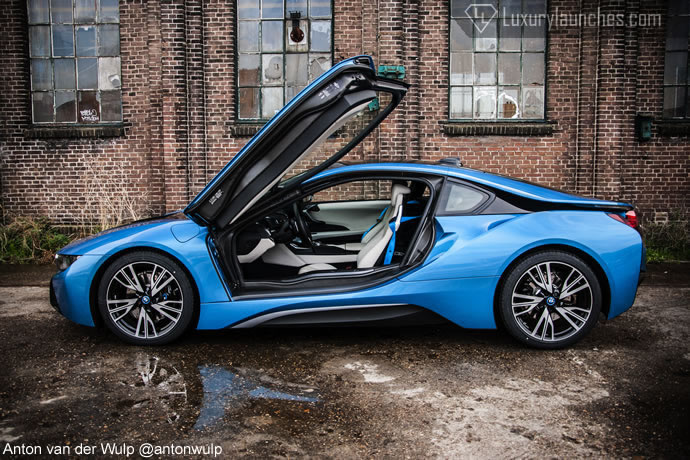 Electrifying
“Are you rich?” I asked my neighbor’s boy to me after seeing his new dream car. “Yes, very rich,” I replied, happy. And remembered a quote from Coco Chanel: “Jewelry is not to show how rich you are, but to make you more beautiful.” Replace the word ‘Jewelry’ with the words’ BMW i8,’ and you feel how a boy’s dream comes true for us painted in girls’ colors.

The average consumption of the BMW i8 is not comparable to that of a thick sports car like a Maserati, i.e. 2.1 l / 60 miles. We drove a little less efficient with regard to sport mode (we like!).

Evelin Dorssers and Odiel Mennink write for www.femmefrontaal.nl a Dutch website that focuses on the female perspective on cars. In addition to reviewing cars, giving news, and writing columns, they also give women the opportunity to read and write about their own favorite cars. With a growing user base FemmeFrontaal (Follow them on Facebook) is also the jury member of the coveted Womens world car of the year award.