The second-generation Rolls-Royce Ghost has finally been revealed as a replacement for the original Goodwood Ghost that debuted in 2009. Over the last decade, the entry-level Rolls-Royce sedan became the most successful model in the marque’s 116-year history. “The first Goodwood Ghost was a response to a whole new generation of clients, both in age and attitude,” says company CEO Torsten Müller-Ötvös. “These men and women asked us for a slightly smaller, less ostentatious means to own a Rolls-Royce. The success of the product we created for them fulfilled our most ambitious expectations.” This makes the Ghost a very important product in the British luxury automaker’s lineup and tasking the engineers to update the model without altering the overall formula. Here’s everything you need to know about the new Rolls-Royce Ghost. 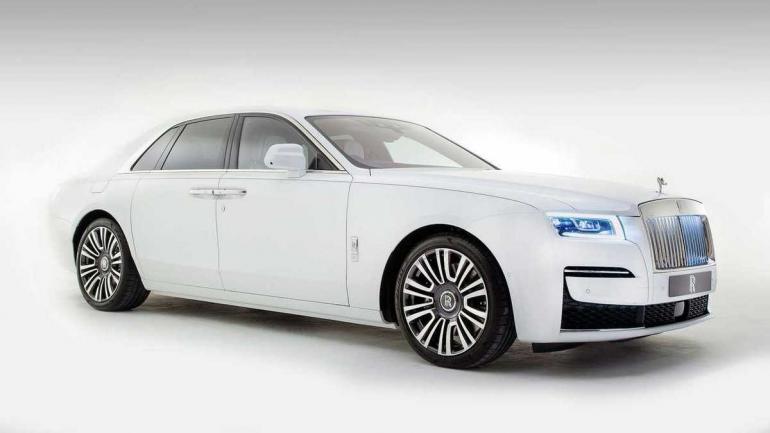 The new Rolls-Royce Ghost is more evolution than a revolution in terms of design
The original Ghost’s minimalist design has been a huge hit amongst its patrons ever since it was launched a little over a decade back. The entry-level luxury sedan was designed to be driven rather than chauffeured, which helped Rolls-Royce win-over a new demographic. The British automaker did not want to play around too much with the tried and tested design, thanks to which the new Ghost retains the overall familiar design of its predecessor. However, if you look closely, just about all the design elements have been updated according to current styling trends and make it homogenous with Rolls-Royce’s latest design philosophy. Starting with the front, the outgoing model’s wrap-over radiator shell has been swapped by a slightly elongated version of the iconic Rolls-Royce grill that is now restricted to the nose of the vehicle. The strakes of the grill are also illuminated by a set of LEDs, making it look more stately. It is flanked by new laser headlights that have a new design and a slightly upswept orientation. Underneath is a single-frame lower air intake that runs side to side and has a more prominent visual appearance than before. All these elements cumulatively give the front a more squared design with straight edges instead of rounded styling, similar to the new Phantom. The profile and the rear look similar to the previous generation model, however, the curvy design elements again have been replaced by sharp, straight lines. 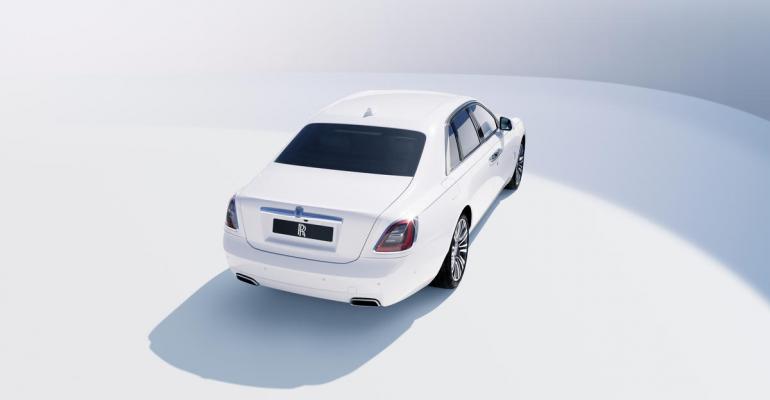 Despite the familiar design, the new Ghost is completely new
The exterior design of the new Ghost might deceive you in believing that the new Ghost might be just a facelift. Well, Rolls-Royce claims the only components carried over from the first Ghost is the Spirit of Ecstasy emblem and the umbrellas found inside the door; Apart from them, the second-generation Ghost is completely new. “Everything else was designed, crafted and engineered from the ground up,” says Müller-Ötvös. “The result is the most technologically advanced Rolls-Royce yet. It distills the pillars of our brand into a beautiful, minimalist, yet highly complex product that is perfectly in harmony with our Ghost clients’ needs and perfectly in tune with the times.” 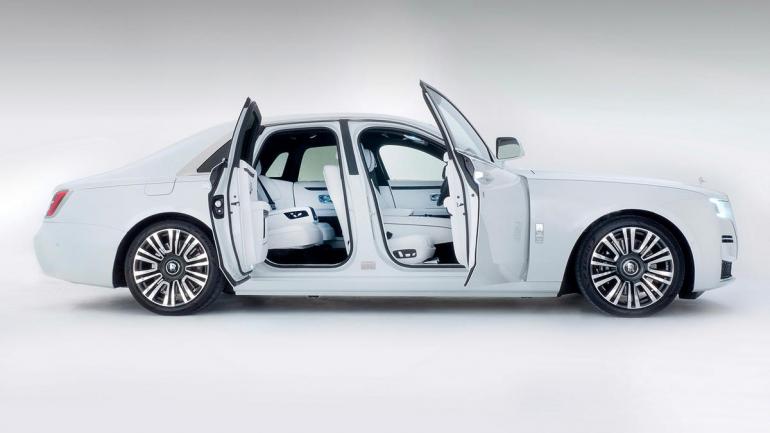 The second-generation model finally ditches BMW underpinnings
The biggest update comes in the form of a new chassis that underpins the second-gen Ghost. The previous Goodwood Ghost shared a lot of components with the old-generation BMW 7 Series luxury sedan, including its chassis. The 2021 Ghost rides on the dedicated Rolls-Royce Architecture of Luxury, which was first used on the eighth-generation Phantom and later passed on to the Cullinan SUV. Thanks to the new aluminum spaceframe architecture, the overall length of the Ghost has increased by 3.5 inches, width is up by 1.1 inches, while the height has grown by an extra inch. This has helped the engineers at Rolls-Royce to push the front suspension mounting assemblies all the way forward and mount the engine behind the front axle to achieve an optimum 50/50 weight balance. 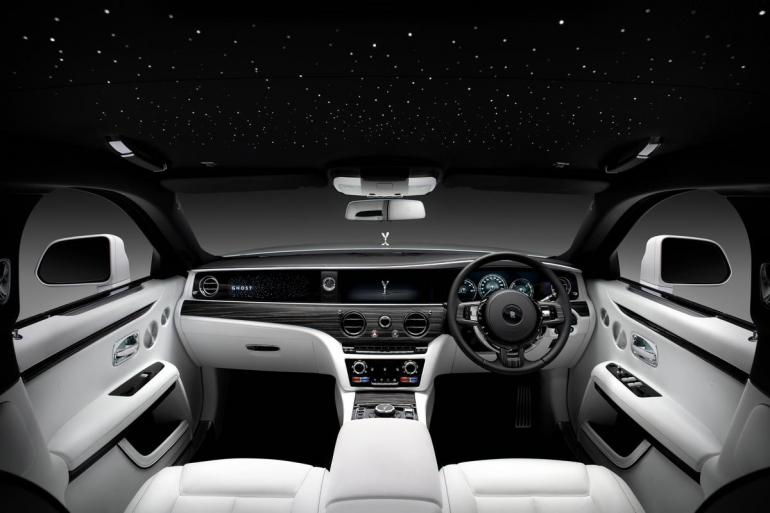 The cabin is still minimalist and familiar, but thoroughly updated
The changes on the inside are more noticeable as compared to the design tweak on the inside. Rolls-Royce has understandably preserved the minimalist styling of the Ghost’s cabin, which offers a great alternative to those looking for something else than the design-heavy interiors of the Phantom and Cullinan. The aging cabin design of the outgoing Ghost has been replaced by a modern one while preserving the comfort of familiarity. Instead of loading the dash with massive screens, too many features and styling elements, the luxury automaker went with a single touchscreen display in the center which is beautifully integrated into the dash. It still has dials and ‘organ-stop’ controls for basic climate control and infotainment functions, and traditional chrome-ringed dials for the instrumentation, augmented by wood inserts. 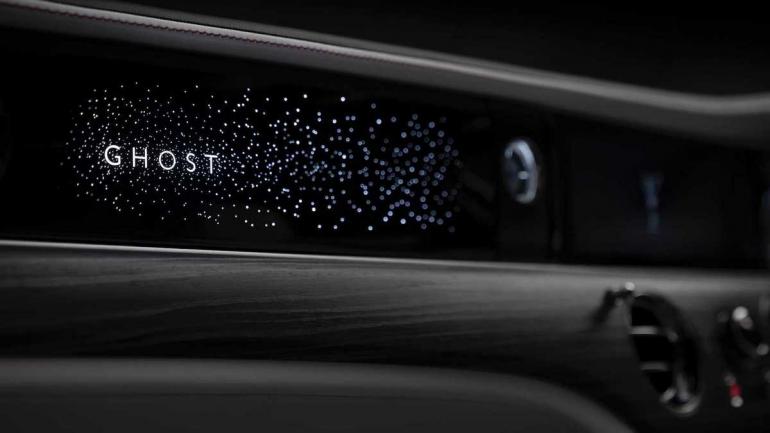 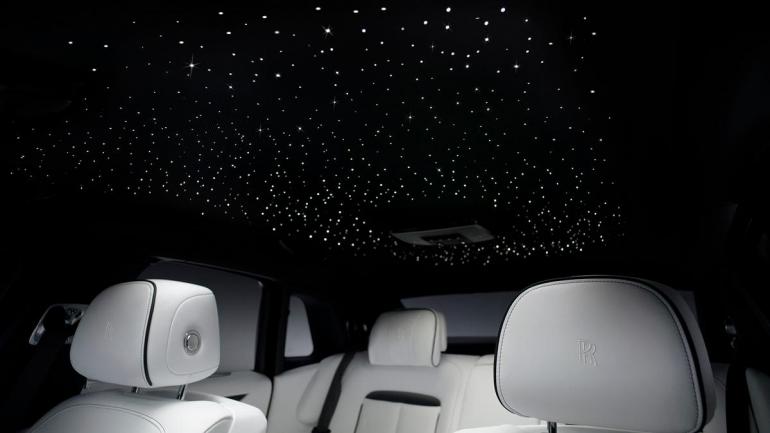 The dash gets its own illuminated stars
The most prominent update to the interior is the illuminated dashboard panel which echoes the famous ‘Starlight headliner’ feature. The ‘Ghost’ wordmark surrounded by more than 850 individual ‘stars’ are softly illuminated once you press the start button and completely invisible when the interior lights are off. As expected from Rolls-Royce, the feature is over-engineered to perfection and was developed over the course of two years and more than 10,000 collective hours. A total of 152 led lights are mounted above and beneath the fascia and a 2mm-thick light guide featuring more than 90,000 laser-etched dots across the surface ensures the feature is lit evenly. 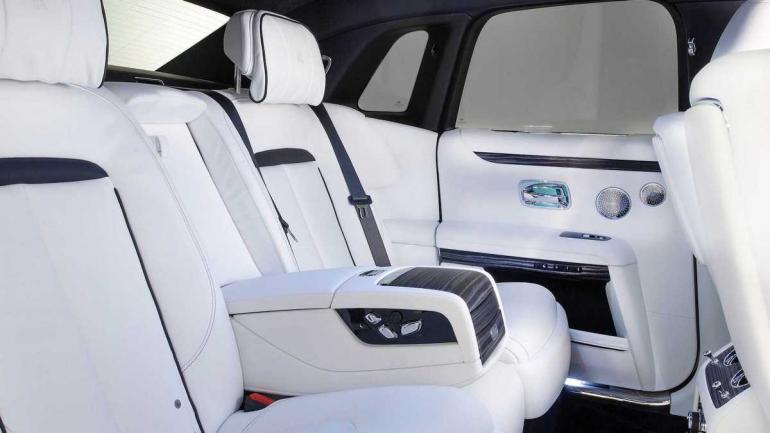 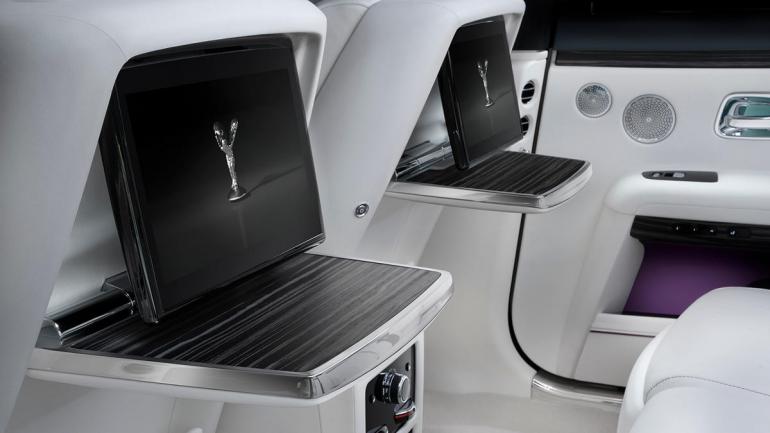 There is a greater focus on comfort
Ahead of the launch, Rolls-Royce teased the kind of work that has been put into creating the new Ghost one of the most comfortable luxury cars ever made. The Ghost is equipped with a completely new front suspension system that uses the world’s first upper wishbone damper above the front suspension assembly. According to the automaker, it augments the car’s self-leveling air struts and continuously variable shocks which along with a steerable, five-link rear axle and GPS-aided transmission controls offers unmatched ride comfort. To further improve the in-car experience, Rolls-Royce added 200 pounds of sound-absorbing material along with many other tweaks to make the new Ghost one of the quietest cars on the planet. Additionally, the new Ghost has also been given electronically opening and closing doors to add to its opulence. 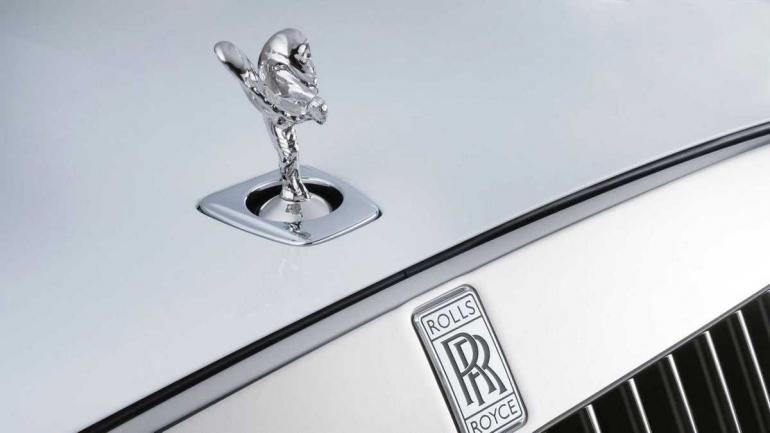 The mighty V12 lives on
Electric powertrains are not expected to come to Rolls-Royce models anytime soon and the British luxury automaker continues to stick to its massive V12. The new Ghost is powered by a 6.8-liter V12 engine that produces 563 horsepower and 627 pound-feet torque, which is a little more powerful than the outgoing model’s 6.6-liter unit. While the previous generation model was rear-wheel drive, the new Ghost has been given AWD and the company claims the 5,628-pound sedan can do the 0-60mph sprint in 4.8 seconds, and go on to an electronically-limited top speed of 155mph. The new Ghost also has rear-wheel steering, which not only makes it more agile and maneuverable at low speeds but also adds stability at high speeds.