A little less than a year before Bugatti pulled the wraps off the Chiron at the 2016 Geneva Motor Show, the French hypercar manufacturer had debuted the one-off Vision Gran Turismo which was built to celebrate the fictional race car created for the Gran Turismo video game. The fully-functional concept car was also a precursor to the Chiron, giving us the first look at the hypercar’s design language. But Bugatti didn’t stop there. Over the last four years, the VW-owned manufacturer has created several special editions based on the Chiron platform, which includes everything from the track-focused Divo to the $18 million bespoke La Voiture Noire. And now, Bugatti has introduced the most radical creation based on the Chiron platform which has been purely built as a technology demonstrator; a product that showcases what Bugatti can build when it decides to play outside the rulebook. Meet the Bugatti Bolide, a fully-functional megacar that looks straight out of a video game. 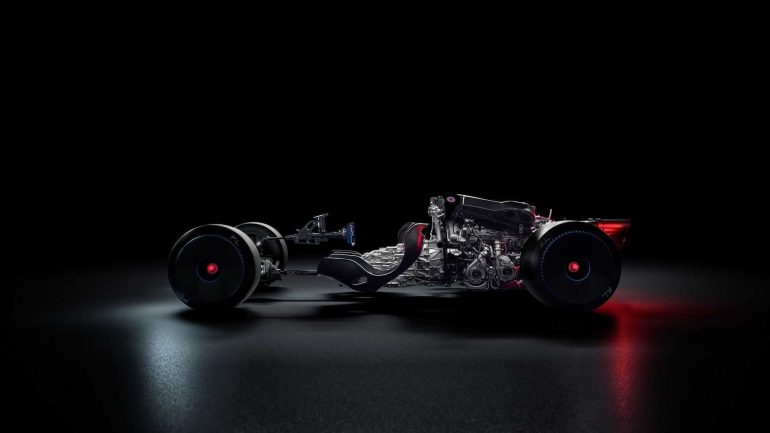 The Bolide is fitted with the most potent version of the W16
Bugatti wanted to build the maddest and the most potent track weapon ever created. The Chiron’s tried-and-tested 8.0-liter W16 engine is already a beast that churns out 1500 horsepower in that standard tune. Bugatti decided to re-engineer the monstrous engine specifically for the race track and use 110-octane racing fuel. Add to that a newly developed set-up of quad turbochargers and the W16 produces a beastly 1825 hp and 1,365 pound-feet of peak torque. 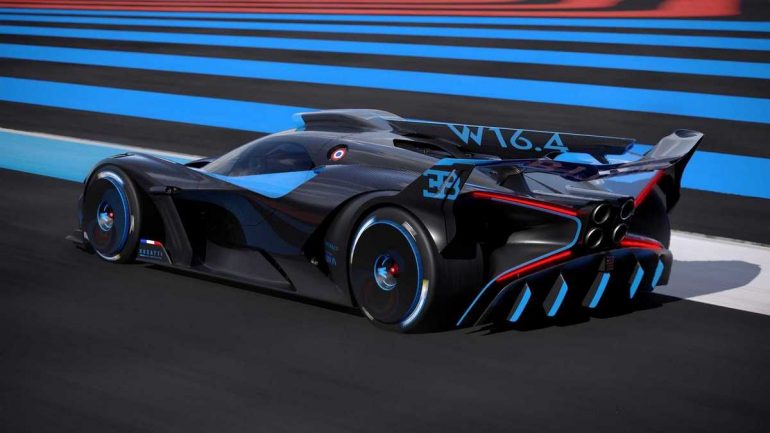 It weighs as much as a small hatchback
Weight is the biggest enemy for race cars and one would expect Bugatti to have taken extreme measures to make the Bolide as light as possible. However, that would be an understatement. The weight-saving measures adopted to build the Bolide are unheard-of. Just about everything is made from carbon fiber, and the rest is made from ultra-light materials including 3D printed aerospace titanium alloy. The wheels are made from forged magnesium. Even the interior is completely stripped off. It has wafer-thin carbon fiber seats and a race car steering wheel along with a tiny digital dash. As a result, the Bolide weighs just 2734 pounds– that’s 1665 pounds lighter than the regular Chiron. That gives the one-off megacar a weight-to-power ratio of 0.67 kg/hp. 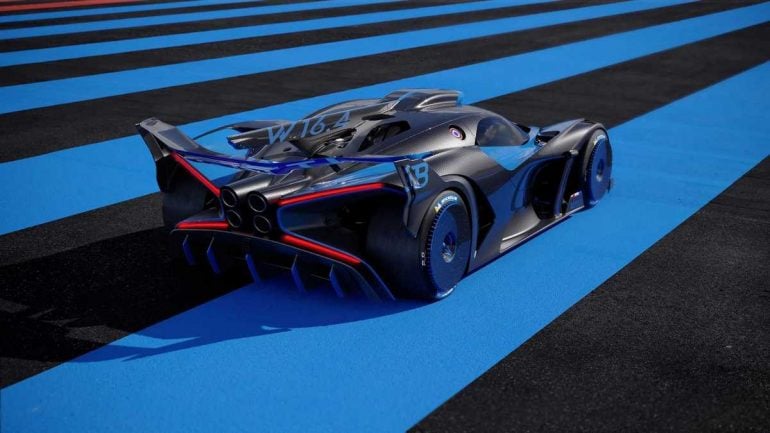 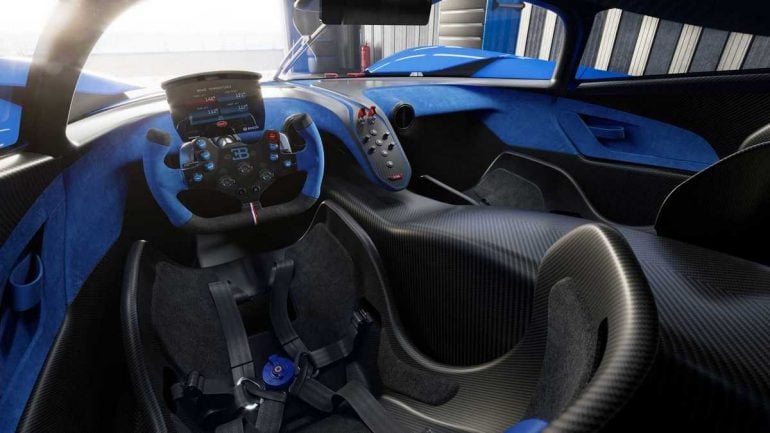 The Bolide has been built to obliterate race track records
Bugatti is currently testing the Bolide at the Circuit Paul Ricard in France. However, the iconic car manufacturer did give us a few lap time figures which are really difficult to comprehend. According to Bugatti, the Bolide can do a lap of Le Mans in just 3:07.1 minutes and go around the Nürburgring Nordschleife in an astonishing time of 5:23.1 minutes. That’s barely a few seconds off the lap record posted by the Porsche 919 Evo LMP1 car. But keep in mind that these lap times are theoretical and Bugatti is yet to physically set these times. 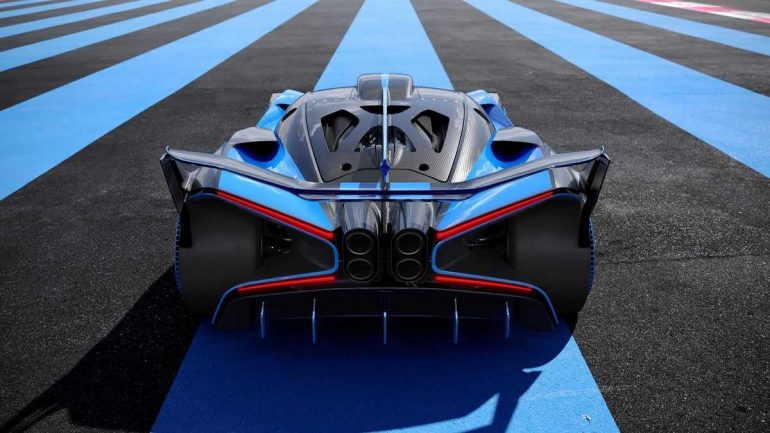 The Bugatti Bolide is an LMP1 race car with a bodywork inspired by the Chiron
The design language of the Bolide might trick you into believing that it is a Chiron with more radical bodywork suited for race tracks. However, you’ll be wrong. The Bolide has the dimensions of an LMP1 race car. It is just 995mm tall, 300mm lower than the Chiron, and as tall as the iconic Bugatti Type 35 race car. It is also fitted with racing slick tires by Michelin that are absurdly wide. It has tires that are 340mm thick at the front and 400mm thick at the rear, which is enough to give the megacar grip that can withstand 2.8g of lateral force. 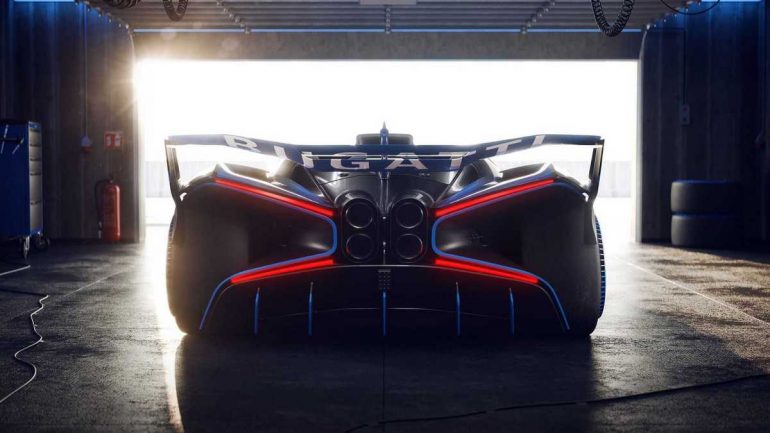 It has more aerodynamic downforce than any other Bugatti ever built
The massive aerodynamic wings on the front and back are meant to create extreme amounts of downforce that will help the megacar stick to the race track and effectively put down the 1800 horsepower churned out by the engine. At 198mph, the rear produces 1800 kilograms of force, which is a lot more than the weight of the car, and the 800 kilograms at the front. All the design elements of the Bolide have also been created specifically to channel the air in the most optimum way. It includes the hollow doors that channel air to the rear and a morphable skin on the intake scoop on the roof bubbles at high speeds to add aerodynamic efficiency.