There’s little doubt that the Batmobile tops the list of the most coveted collector’s items, notwithstanding its era and make. The original Batmobile which was used in the very first Batman TV show, was sold for a record-breaking $4.6 million by the famous auction house Barrett-Jackson, but there is absolutely no dearth of much cheaper options in the form of replicas. Some of the replicas are plain rubbish and look anything like the original, but a few of them pop up every once in a while with utterly flawless bodywork. A 10-member team from Indiana, USA, called the ‘Fiberglass Freaks’ has brought back the iconic retro Batmobile from the mid-60s TV show by building a pitch-perfect replica. 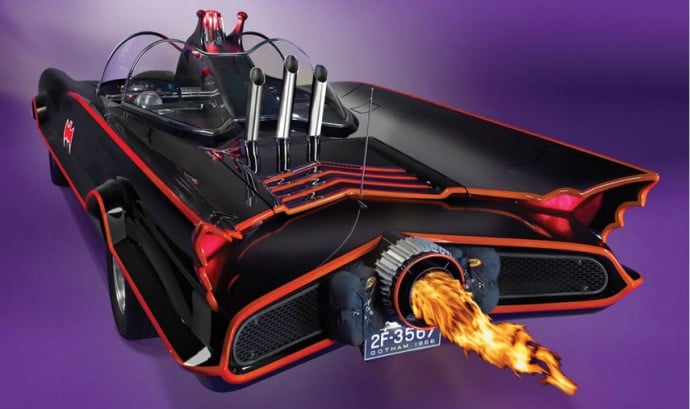 The replica is not officially licensed but also road-legal despite being loaded with intricate detailing, including the double-bubble windshield, an actual working flame thrower in the rear, an aluminum roll-top dashboard, a flashing red beacon light, correctly labeled knobs, and buttons, and crazy fins on the bodywork. It even has a fully operational Batphone in addition to an only-for-decoration Batscope display. The replica Batmobile is built on a custom Lincoln chassis and is powered by a 430-horsepower, 383 Blueprint Crate engine. To make it dead-accurate, the team takes almost a year to build, and now it’s available for sale via Hammacher Schlemmer for $200,000.

Tags from the story
Replica