We all know that the richest people on this planet love to spend millions of dollars buying collectible cars, luxurious properties, aircraft, and whatnot. But nothing really comes close to a multi-million-dollar superyacht when it comes to establishing a pecking order among the super-rich. Expensive luxury superyachts are more about displaying the owner’s wealth status than enjoying a relaxing time sailing across the oceans.

From Amazon founder Jeff Bezos to Google co-founders Sergey Brin and Larry Page, these billionaires own massive superyachts that serve as the perfect representation of the luxurious lifestyles of their owners. One of them is the stunning superyacht named Musashi that American billionaire Larry Ellison owns. Ellison co-founded the software giant Oracle in 1977 and helmed it for 37 years. He is worth close to $100 billion, and according to Forbes, he is currently the 8th richest person on earth.
Musashi superyacht’s Samurai connection
Ellison is known for his love for ultra-luxurious yachts and he has owned several of them over the years, which includes the 58-meter Ronin, the 75-meter Katana, and the gigantic 138-meter Rising Sun. The astute readers might have noticed that all the luxury vessels mentioned above have names that are directly linked to Japan.
The Musashi superyacht is no different and is named after Miyamoto Musashi – one of the greatest samurais in Japanese history. Born in the 16th century, Musashi was a Japanese swordsman, philosopher, strategist, writer, and rōnin. He became renowned through stories of his unique double-bladed swordsmanship and undefeated record in his 61 duels. He even received the title Kensei, Japanese for ‘sword saint’. Ellison’s passion for the Japanese culture and the Samurai legends was the prime reason the superyacht was named Musashi.
Designed to reflect the minimalistic Japanese style
The luxury superyacht was launched in 2011 by Feadship’s Koninklijke De Vries yard in Makkum, the Netherlands. It is estimated to be worth a whopping $160 million. With a length of 88 meters, Musashi was the largest yacht built by Feadship at that time and was also the second hull from the builder’s XL range. Elision bought it as a replacement for the 138-meter Rising Sun, which the American billionaire considered too big for most yachting destinations. The vessel’s stunning exterior and interior designs were both penned by Sinot Yacht Architecture & Design in close collaboration with Feadship and De Voogt Naval Architects.
According to a report by Boat International, Sinot described the vessel’s design as: “Subtle but unconquerable, with clear lines but many concealed elements, with an open structure, but closed where necessary; [she is] entirely inspired by Musashi’s character.” The Japanese styling influence is visible, especially on the superyacht’s clean exterior lines.
Musashi can accommodate up to 18 guests and requires a crew of 23 people to operate. The interior design is a beautiful combination of elements taken from Japanese design and art deco. Everything from the furniture to the materials used and even the numerous artworks and sculptures that decorate the vessel’s interior reflect Japanese design. There’s a Hiroshi Senju painting of a waterfall in the upper saloon, illuminated by custom lighting. Furthermore, other areas, such as the spa, are also designed in traditional Japanese design.
The five-deck layout of the superyacht is also very unconventional. The lower deck is taken up by technical spaces and crew areas, with the gym and spa where the tender garage would typically be placed. The tenders are kept in an area on the main deck that turns into a giant beach club when the tenders are deployed.
Another highlight of the Musashi superyacht is the convertible cinema on the main deck that also doubles as a cozy lounge area. The main deck also houses the guest cabins. Half of the entire upper deck is dedicated to one of the master suites. Equally stunning is the central glass lift wrapped around by a stainless steel and glass staircase that snakes through every deck of the yacht.
Ellison’s superyacht is powered by 4 MTU diesel engines that help the massive superyacht attain a top speed of 21 knots and have a cruising speed of 18 knots. The vessel has a maximum range of 6000 nautical miles. Musashi has also been depicted in the TV series ‘The Dropout’ in a scene where Larry Ellison gives Elizabeth Holmes a motivational talk. 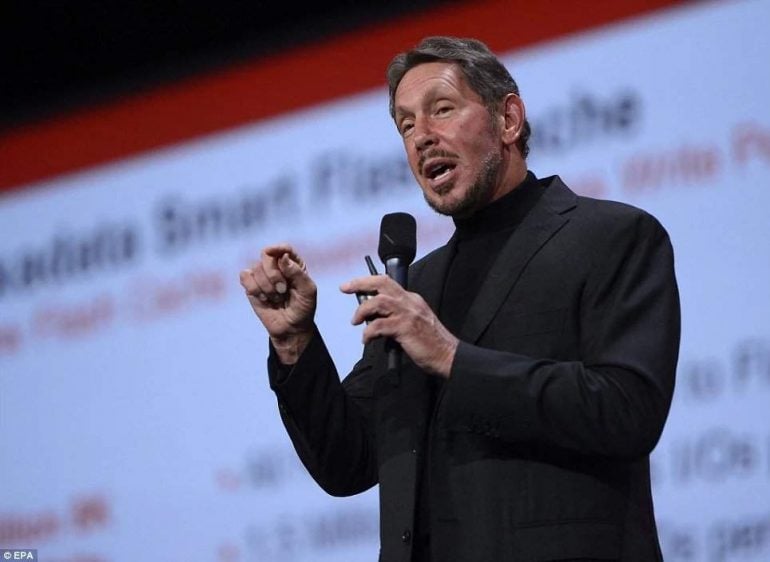 Who is Larry Ellison?
Larry Ellison co-founded American computer technology giant Oracle, which began in 1977 as a startup with only three programmers, to become the world’s second-largest supplier of business applications. Although Ellison relinquished the CEO post at Oracle in 2014, he currently serves as board chair and chief technology officer. He also currently holds a 31% share in the company. The stock price of Oracle swelled in 2021, making him the fifth richest person in the world. At the end of last year, Ellison’s net worth reached $136.2 billion, according to Forbes. Ellison even famously bought 3 million shares of Tesla worth $1 billion in 2018 and has been on the board of Tesla ever since. Tesla has confirmed that he will be stepping down from the board of directors in 2022.