It doesn’t matter if you drive an econobox worth a few thousand bucks or a limited production hypercar that can cost several million dollars, the law of the land applies to all. A brand spanking new Bugatti Chiron Super Sport 300+ was recently pulled over by the cops in London. Nope, the French hypercar wasn’t speeding to be stopped by the cops but was missing a front license plate. The incident was captured by London-based automobile influencer TheTJFF who was on a ride-along in the Bugatti. In countries like the US and Canada, the rule for a front license plate depends on the state or province. States like Florida, Kansas, Arizona, and Michigan only require you to display a rear license plate. However, in the UK, it’s mandatory for all vehicles to have both front and rear license plates to be used on public roads legally.

Most modern supercars have such complicated frontends that there’s very little scope to fix a number plate. Just look at all supercars by manufacturers like Lamborghini, Ferrari, McLaren. Such high-performance cars have aggressive aero elements on the front like air vents and a massive splitter that leave no room for a conventional license plate. 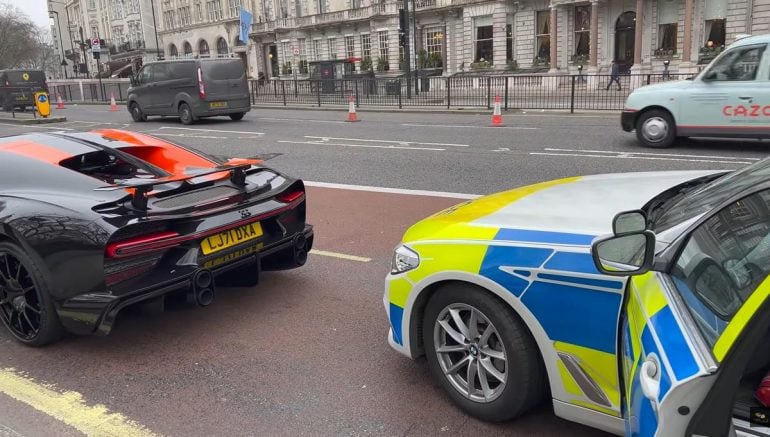 Some supercar owners make do by sticking a sticker of the registration number or go with a makeshift plate that’s tacked on to some part of the car’s nose. But there are people who take the risk of driving illegally without a number plate to preserve the car’s looks and aerodynamics. The Bugatti Chiron owner learned the hard way that it doesn’t always work.


The owner of the Bugatti Chiron Super Sport 300+ was reportedly fined £100 (about $135) for the offense, which completely sounds insignificant in front of the hypercar’s $4 million price tag. But things could have been worse. Back in 2019, a Ferrari 488 was confiscated by the cops in the UK for the same offense. You won’t want a Chiron Super Sport 300+ with its pristine carbon fiber body to be towed in a government vehicle; it just sounds like a nightmare. Hope the Bugatti owner learned his lesson and has added the needed front license plate. According to the YouTube video, the Bugatti was recently delivered in the UK. The Bugatti Chiron Super Sport 300+ is a limited-production version of the standard Chiron that was introduced to celebrate the manufacturer’s record-breaking speed run. Bugatti claims it is identical to the Chiron that became the first production car in the world to cross the hallowed 300mph mark. Only 30 examples of the Super Sport 300+ will be made, making it one of the rarest automobiles.

Tags from the story
Bugatti-Chiron, UK

Spread across 17,500 sq.ft on top of the world’s tallest residential building. This $250 million…