The Nineties were a very interesting time for the automobile industry, especially for the supercar segment. All of a sudden, manufacturers big and small jumped on the bandwagon to build their own high-performance machines. While the iconic McLaren F1 is probably the best example to define the glorious 90s era, there are numerous stories from that decade that are just as interesting and are worth telling. One such fascinating story is that of the Bugatti EB 110 – a fabulous supercar that turned out to be a financial disaster, bankrupting the company. While the magnificent supercar was almost forgotten for many, many years, the EB 110 is finally beginning to get the recognition it truly deserves. Last year, a 1-of-30 1994 Bugatti EB110 Super Sport was auctioned for a whopping $3.5 million, which tells you that it’s finally found a place amongst the most desirable collector’s cars. Here’s the intriguing story of one the greatest failed experiments from the world of exotic cars.

Bugatti reborn
Italian-born industrial designer Ettore Bugatti founded his eponymous company in 1909 in the then-German city of Molsheim. It went on to become one of the most popular brands, known for its successful race cars and beautiful road cars. However, when Ettore passed away in 1947 at the age of 66, the company began to struggle, ultimately becoming defunct by 1959. There were some failed attempts to relaunch the brand but it remained dormant until a highly successful Italian businessman and entrepreneur named Romano Artioli finally resurrected the Bugatti brand name in 1987.
To bring the legendary company back from the dead, Artioli teamed up with former Lamborghini engineer and designer Paolo Stanzani and French professor and historian Jean-Marc Borel. The entrepreneur also hired engineers and employees from Maserati, Ferrari, and Lamborghini, and built a modern in Campogalliano, Modena, Italy. It was the beginning of a new but sadly short chapter in Bugatti’s story. 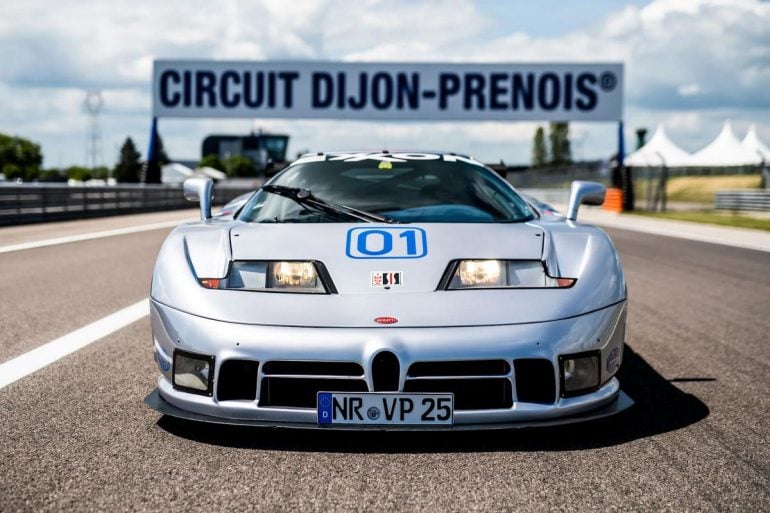 A thing of beauty
Artioli, an Italian entrepreneur who ran one of the largest Ferrari dealerships in the world in the ‘80s, had managed to bring the storied brand to Italy by building a factory close to that of Ferrari and Lamborghini. On top of that, the team given the task to create the EB 110 consisted of Tiziano Benedetti, Achille Bevini, and Oliviero Pedrazzi – a trio that had worked on the iconic Lamborghini Miura.


Development of the EB 110 started in 1987 and the initial chassis drawings were sent to several of the most famous designers of that era for design ideas as Artioli wanted the Bugatti Supercar to be more desirable than a Ferrari.
Artioli was so fussy about EB 110 aesthetics that he was unhappy with the designs proposed by Paolo Martin, Giorgetto Giugiaro, Nuccio Bertone, and even Marcello Gandini. Ultimately, the Italian businessman chose Gandini’s design but had Gianpaolo Benedini make changes according to his wishes. After several prototypes and many changes, the EB 110 was finally born.
A fitting tribute to the company’s founder
Romano Artioli staged a grand unveiling of the EB 110 on 15 September 1991, at both Versailles and in front of the Grande Arche de la Défense, near Paris, on the 110th birthday of Ettore Bugatti. In fact, the name EB 110 is an abbreviation derived from Ettore Bugatti’s name and his 110th birthday.
The EB 110 was a technological marvel with many innovations that were rarely used by the automotive industry in that era, including a carbon fiber monocoque chassis, active aerodynamics, and an all-wheel-drive system It was powered by a quad-turbocharged 3.5-liter V12 that produced 553hp in the GT version and 603hp in the lighter and more potent Super Sport version. The SS had a top speed of 221mph and a 0-62mph time of 3.2 seconds, which is super impressive even by today’s standards.
The EB 110 also found a fan in legendary Formula One driver Michael Schumacher who purchased a yellow EB 110 Super Sport in 1994. However, the resurrected Bugatti became a victim of politics. Bugatti, like many other small supercar manufacturers of that era, outsourced parts from companies that were also suppliers to Ferrari and Lamborghini.
It is rumored that Ferrari threatened to never buy from them again if they continued to sell parts to Bugatti. As a result, the companies became reluctant to supply the crucial parts necessary to complete the ordered cars on the production line. Bugatti also progressively got into increasing financial difficulties and finally declared bankrupt in 1995, making the EB 110 a short-lived dream. Sadly only 139 examples of the EB 110 were ever made.
Three years later, VW purchased the design and naming rights to Bugatti from Artioli to establish Bugatti Automobiles S.A.S., and the rest of the story is pretty well known. The EB 110 in many ways is a precursor to the Bugatti Veyron that went on to become the world’s fastest production car and permanently etch its name in the history books. This is why the EB 110 deserves more recognition and should never be forgotten.
Fortunately, Bugatti created a Chiron-based limited-edition named Centodieci in 2019 as a tribute to the EB 110.
Tags from the story
Bugatti