If you have following the electric car market for the last few years, you might be aware that the electric pickup truck segment is one of the most hotly contested at the moment with several well-established automakers and startups locked in a fierce battle to bring the most compelling product to the market. While the Tesla Cybertruck might be credited for being the one for pulling everyone’s interest towards battery-electric pickup trucks, there are plenty of competitors that can give Elon Musk’s ambitious EV a run for its money. Most of these electric trucks feature specs that will force your jaw to hit the ground. Here’s a rundown of all the upcoming electric pickups that aren’t Tesla Cybertruck. 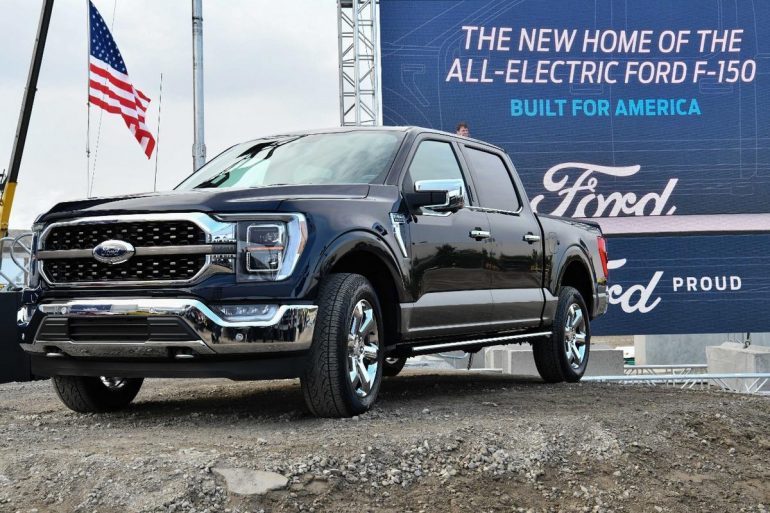 Ford F-150 Lightning
Ford has finally confirmed that it is reviving the ‘Lightning’ moniker for its upcoming electric F-150 pickup truck that is all set to debut on May 19. Originally, the Lightning name was suffixed to the hot-rod version of the F-150 that was created by the automaker’s Special Vehicle Team (SVT) and sold from 1993 to 1995 and again from 1999 to 2004. It was surprisingly quick and purpose-built to have good handling. So it isn’t really a surprise Ford went with the nameplate for the battery-electric F-150 as the manufacturer has already confirmed that it will be the fastest, most powerful version of the iconic pickup truck ever made. Although very little is known about the electric F-150 as of yet, Ford has released a teaser ahead of the reveal that does give away a few details. The form factor of the electric version looks to be similar to the traditional F-150 except for some distinct styling elements, which include a continuous LED bar connecting the headlights. The F-150 EV is expected to feature a dual-motor set-up offering all-wheel drive, a range of around 300 miles, some form of autonomous-driving assists, over-the-air software updates, and a cabin with lots of screens. Considering that the Ford F-150 absolutely dominates the pickup truck market in North America, the electric version might prove to a game-changer.

Release date – Ford will reveal the F-150 Lightning on May 19 and the production is expected to begin by mid-2022.
Pricing – There’s still no word on the pricing as of yet but it is expected to be priced above $50,000. 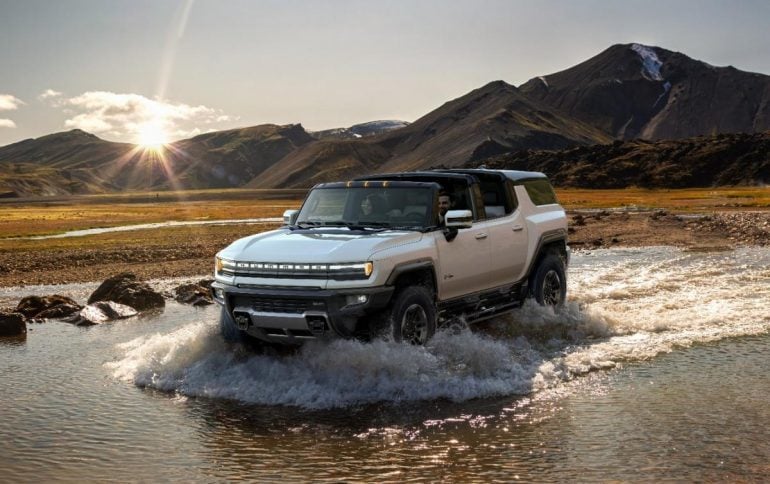 GMC Hummer EV SUT
The iconic Hummer nameplate made a surprising comeback last year in the form of a massive electric pickup truck. The Hummer brand now lives under the GMC umbrella, but the EV version retails the unmistakable design of the original that had military roots. The Hummer EV SUT has a lot going for it than just its sheer size. In fact, it has quite a few neat tricks up its sleeves that make it a really compelling option for those looking for a capable pickup truck. When it hits the market, the Hummer electric truck will be the most capable light-duty truck offered by GMC. Although there will be quite a few variants to choose from, the range-topping Edition 1 will come with three electric motors churning out 1000 horsepower and an equivalent of 11,500 lb-ft of torque. While the massive 35-inch tires and adaptive air suspension will make it more than capable of dealing with off-road situations, the electric pickup truck has a really intriguing “Crab mode” that uses rear steering to move the truck diagonally like a crab. 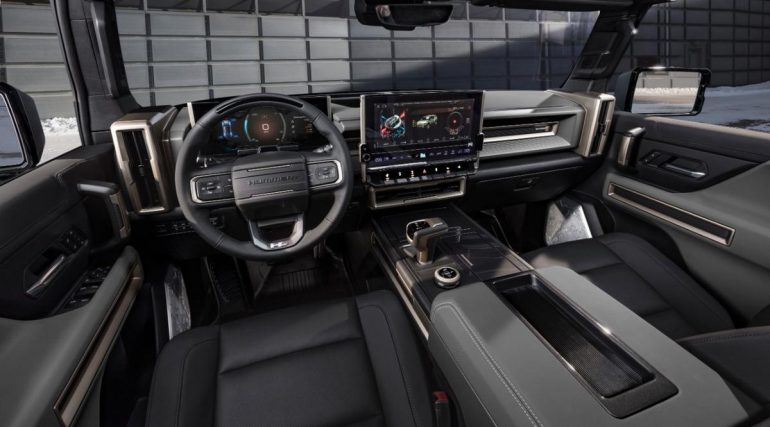 Release Date – The fully-loaded Edition 1 will be arriving later this year, while the rest of the versions will be subsequently launched over the next three years.
Pricing – The pricing starts at $79,995 for the EV2 version that won’t arrive till 2024. The Edition 1 has a price tag of $112,595.


Chevrolet Silverado EV
Back in 2019, GM announced that it will be building a battery-electric pickup truck that will lock horns with the Tesla Cybertruck. There were various reports back then suggesting that the GM had set a very optimistic deadline for the Chevrolet Silverado EV targeting fall of 2021, but Car and Driver later said that the automaker plans to put it into production by 2025. However, GM has had to accelerate its electrification plans and the EV pickup could come before 2023 along with other EVs promised by the automaker. The Silverado EV will be built at Factory Zero, side by side with the Hummer EV, and will even share the same Ultium platform and battery technology. But, the Silverado EV will be hugely different from the electric Hummer and will be closer to a traditional utilitarian truck than a lifestyle product. The Silverado EV will get a massive 200 kWh battery pack, which GM claims will offer a range of up to 400 miles. 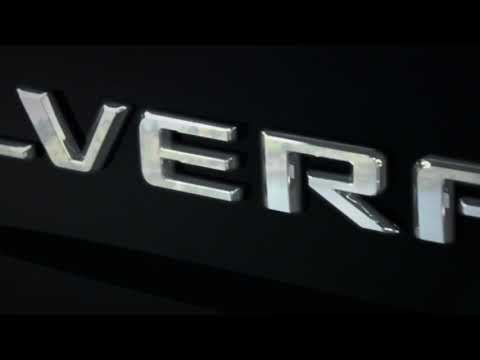 Release Date – The timeline has been revised several times, but it looks like GM is aiming for a 2023 release.
Pricing – there’s no word on the pricing as of yet but it is expected to be cheaper than the Hummer EV and might have a starting price close to $60,000. 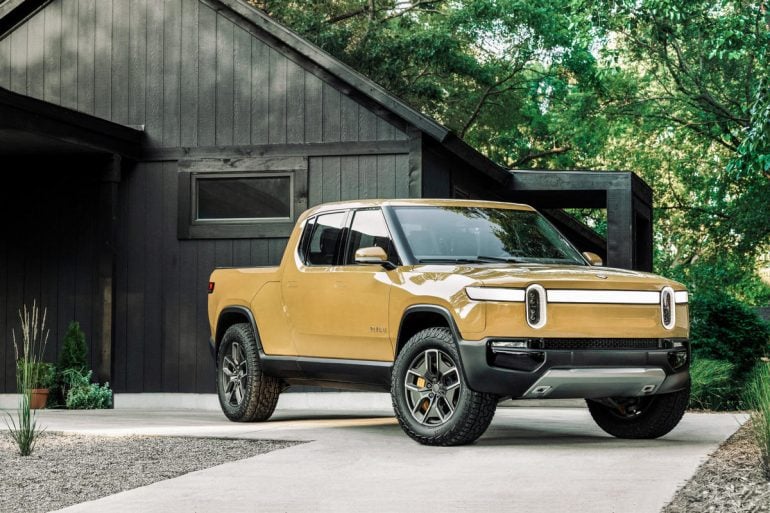 Rivian R1T
American startup brand Rivian looks to be on schedule to beat everyone and be the first to the market with a battery-electric pickup truck. With the first deliveries set for June 2021, the company is soon going to kick off a tour of the US this summer to get their customers who put in a deposit behind the wheel and get a feel of the electric pickup. The futuristic-looking vehicle sized between a mid-size and a full-size pickup even featured in the Long Way Up motorcycle adventure show starting Ewan McGregor and Charley Boorman. Participating as a camera car on the 13,000-mile road trip, the Rivian R1T successfully displayed its capability as a rugged truck that can take on the most challenging conditions. Rivian will offer several different versions of the R1T with different battery sizes. Every version will get an all-wheel drive, with an electric motor at each wheel. The range-topping 135.0-kWh version will be the quickest with 754 horsepower on tap and a claimed 0-60mph time of 3.0 seconds. 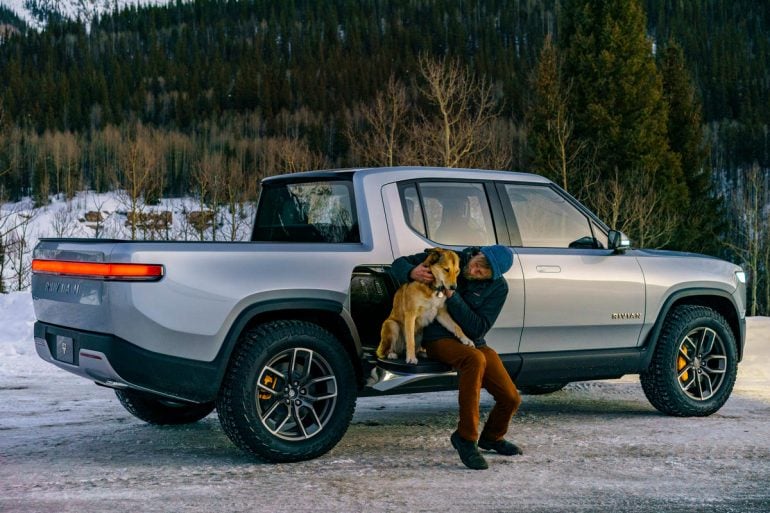 Release Date – Rivian will start delivering to customers in June 2021.
Pricing – The Explore model is the cheapest in the line-up with a starting price of $67,5000. 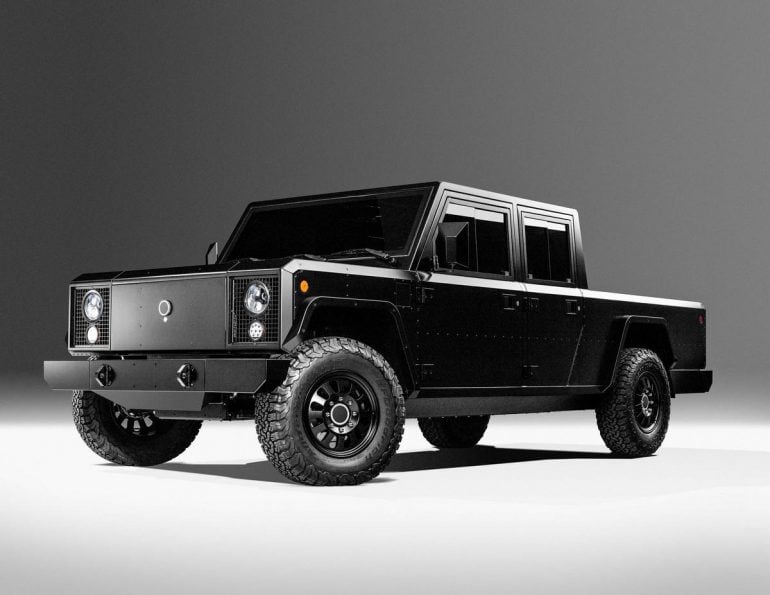 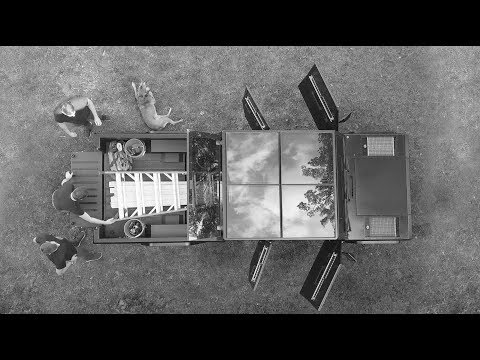 Originally showcased as a prototype back in 2017, the Michigan-based company was the first to announce its intention to build an electric pickup truck; However, the company is yet to start production. The pick-up truck has two motors that give it all-wheel-drive and produce a combined power output of 614 horsepower and 668 lb-ft of peak torque. It also features a two-speed gearbox with a dedicated low gear to make it unstoppable off the road. Powering the motors will be a 120 kWh battery pack which will give it a range of 200 miles. But the company will also offer an optional 180 kWh pack for those who need more range. 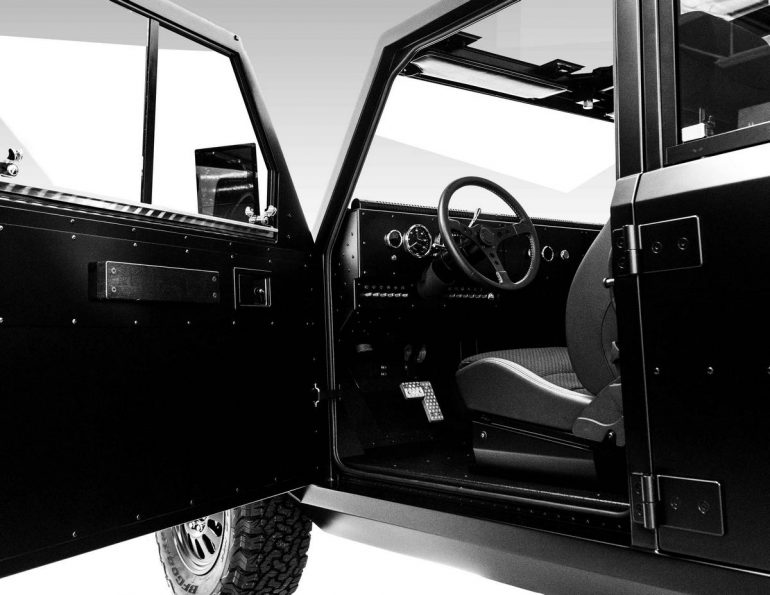 Release Date – Bollinger says it plans to start deliveries by the end of 2021.
Pricing – Surprisingly, the Bollinger B2 is the most expensive pickup truck on the list with a price tag of $125,000. 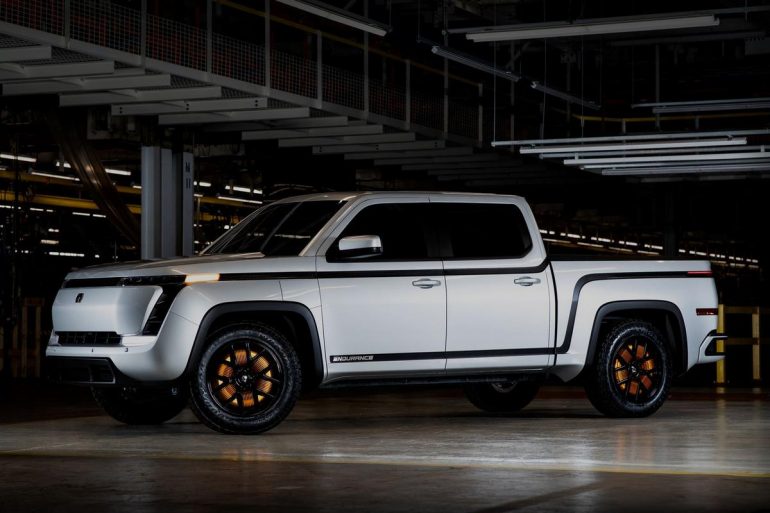 Lordstown Endurance
Lordstown Motors is another EV startup that aims to challenge the heavyweights of the automotive industry by recreating Tesla’s success. The American company announced its arrival back in 2019 by acquiring GM’s Lordstown plant in Ohio and subsequently started accepting $1000 deposits for its upcoming electric pickup named Endurance. Unlike the rest of the names on this list, Lordstown Motors is targeting more of the commercial market with its Endurance pickup truck and intends it to be a fleet vehicle. 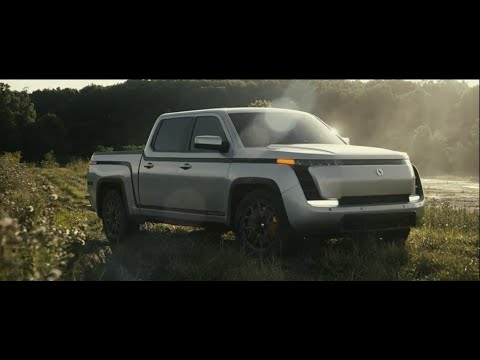 The specs revealed by the American startup claims the Endurance will have a range of more than 250 miles thanks to a 109.0 kWh battery pack. The EV will be equipped with 4 in-wheel hub motors providing it all-wheel drive, but the top speed will be limited to just 80mph. But Lordstown Motors suffered a setback earlier this year when a prototype caught fire while testing on public roads which completely destroyed the vehicle. 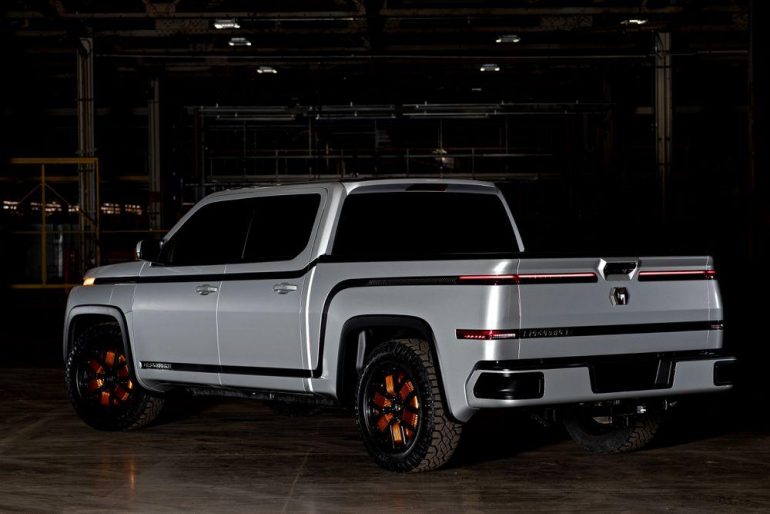 Release Date – Lordstown Motors says the production will begin in September 2021.
Pricing – The Endurance will have a starting price of $52,500. 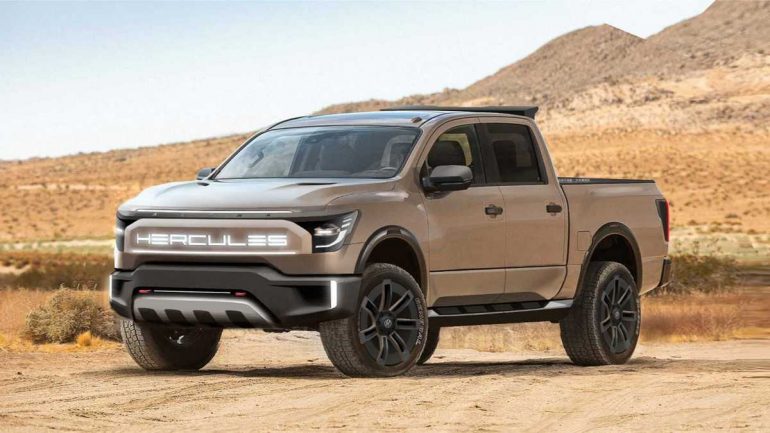 Hercules Alpha
Hercules Electric Vehicles is a Detroit-based EV startup that was founded in 2018 with the aim to bring luxury eco-utility products to market. Their plan is to start with a luxury electric pickup truck called the Hercules Alpha followed by other electric mobility products. As of now, very little information is out there about the pickup truck and the company itself, which is currently scouting for a location to set up a factory and finding partners to manufacture components. The American company also recently announced that it is looking to raise $20 million to fund its operations. The design renderings released by Hercules suggest a traditional-looking pickup that looks a little like the Nissan Titan. Hercules claims that the electric pickup will have a quad-motor setup with over 1000hp, an all-wheel-drive system, and 0-60 mph time of 4 seconds. It has also partnered with Prieto Battery — a specialist of 3D solid-state Li-ion rechargeable battery. 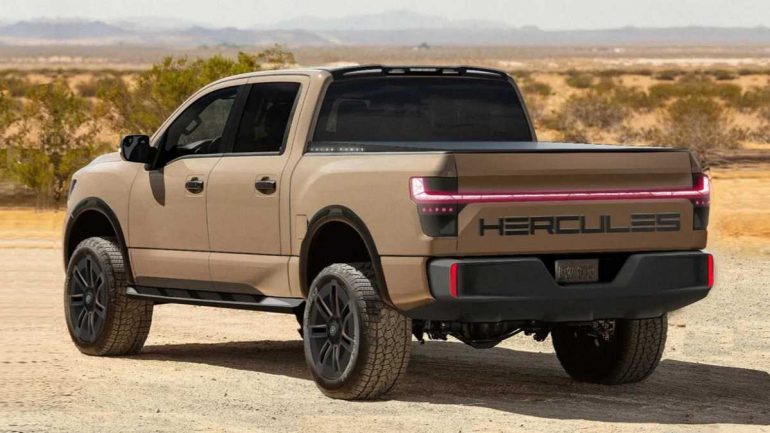 Release Date – Hercules claims it is aiming for a 2022 release, but we seriously doubt it is achievable.
Pricing – There’s no word on the pricing but the company is currently accepting a $1500 deposit. 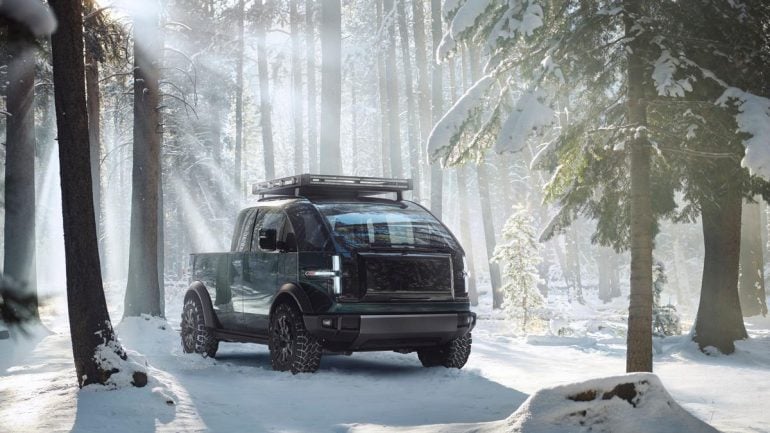 Canoo electric pickup
A California-based electric automotive startup called Canoo recently revealed a snub-nosed pickup that might remind you of the iconic VW Microbus. The rounded design of Canoo’s pickup is in stark contrast to the usual burly image attached to pickup trucks. The battery-electric pickup is based on the multi-purpose platform architecture by the Californian startup and gets futuristic styling elements. 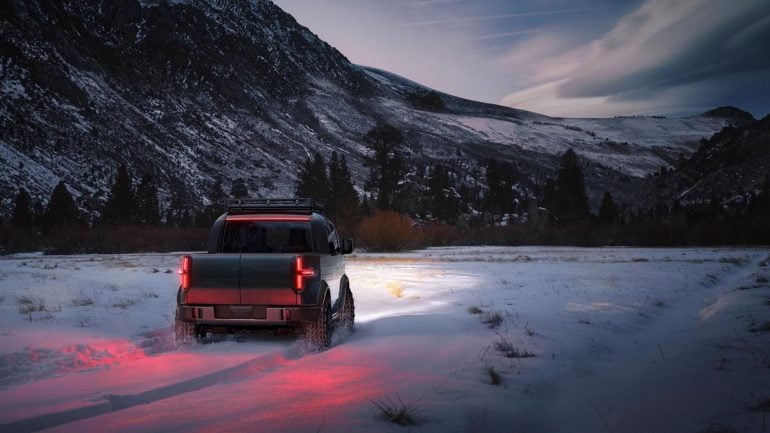 According to the details released by the American company, the electric pickup will offer more than 200 miles of range and as much as 600 horsepower and 550 pound-feet of torque with the dual-motor configuration. There is also be a cheaper, single-motor option in the line-up. Canoo will also offer various battery options ranging from 40 kWh to 80 kWh. 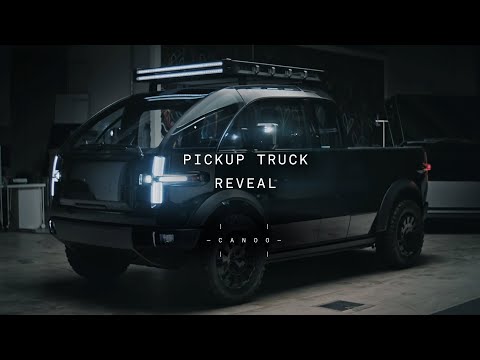 Release Date – Canoo is aiming to put the pickup into production by 2023.
Pricing – There’s no information on the pricing but it could be offered on a subscription model. 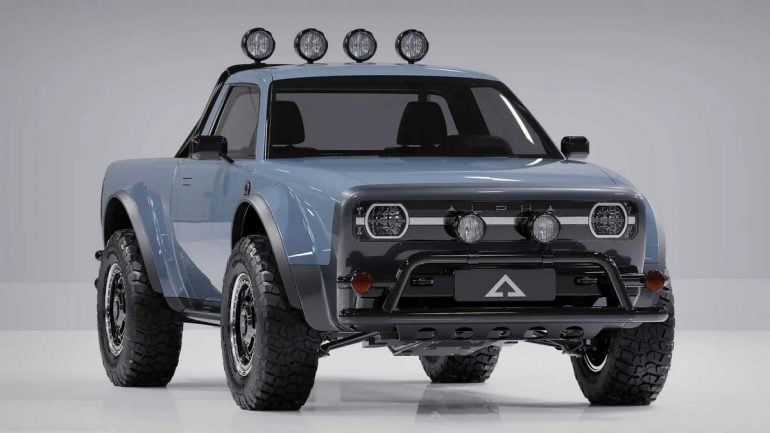 Alpha Wolf
Alpha Motors Corporation is yet another Californian startup trying to make its mark in the EV segment with its electric pickup models named Wolf and Wolf+. The retro styling of the two models might remind you of trucks from the 1980s and ‘90s. Alpha Motors plans to offer the Wolf in single-motor, front-wheel-drive, and dual-motor, all-wheel-drive configurations, while it claims the battery-electric pick-up will offer a range of around 250 miles and a 0-60mph time of 6.2 seconds. The Wolf+, on the other hand, is an extended-cab, four-seat version of the Wolf, sharing the same platform. The minimalist design of both models emphasizes the fact that they are built for utility and adventure. 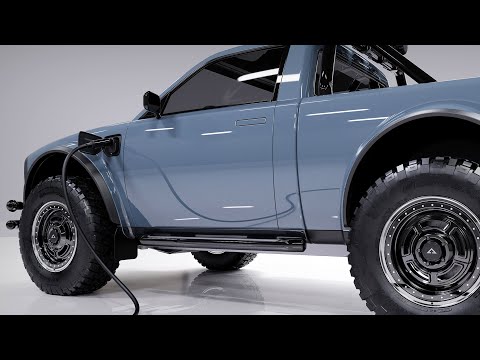