A few months back, we brought you the news of an Ferrari showroom in Japan that was destroyed by one strongest typhoon to hit the country in the last 25 years. The storm destroyed 51 Ferraris worth $9 million. Now, a storm in Italy has destroyed hundreds of brand-new Maseratis waiting at a port to be shipped to the Middle East. A major fire broke out after flooding at the port of Savona, Liguria, incinerating hundreds of export-ready luxury cars. According to local media reports, the severe storm made the sea water rise and flooded the port, including the two parking areas. The salt water due to the flooding caused car batteries to explode and catch fire in the early hours of Tuesday morning. 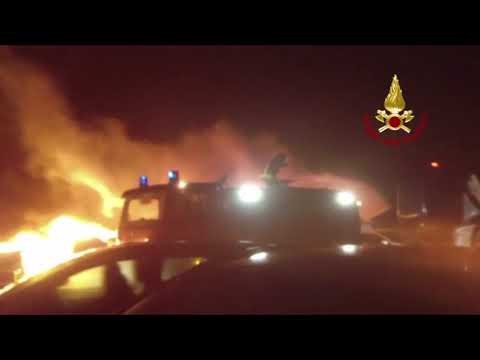 This is reportedly the second major fire at the same port in a week. The Port Authority building was completely destroyed after a fire broke out on 23rd October. No one was reported injured in the blaze, which required 14 teams of firefighters to bring the situation under control. Several videos of the incident have surfaced online, along with the footage captured by news teams at the location, that show the grim scenes at the port making it look like clips from a post-apocalyptic movie. Savona is located in the Liguria region and is about 100 miles south of Milan. The town was battered by strong winds, rain, and high waves during the storm that left nine people dead and one missing in Italy.

Tags from the story
Italy, Maserati