Supercars deserve super makeovers or at least that’s what custom-artist Rene Turrek swears by. After giving us wild versions of a Captain America Ford Mustang and an Iron Man Lamborghini Aventador, the quirk master is back again with a luxe paint job on the BMW i8. His latest inspiration is Jared Loto’s Joker reference from Suicide Squad that he has brilliantly manifested all over the futuristic beamer. 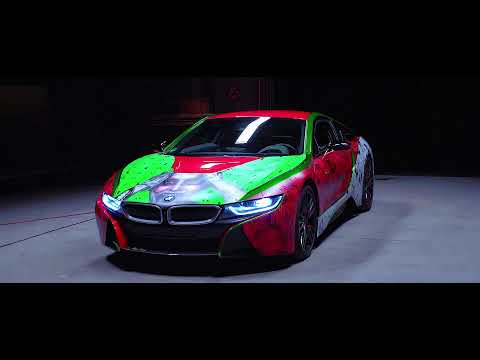 As part of his design, Turrek has covered the i8 with streaks of red, white and green paint – all of which play a dazzling contrast against the car’s black backdrop. The sinister auto displays a portrait of the Joker on the hood along with a villainous reference of a skull on the rear side. The catchy-ness of the design though comes from the glowing laughs or HA-HA’s that are inscribed all over the front quarter panels. The car is also festooned with a string of LED lights for any missing flair.

Over the past decade, Turrek has emerged as one of the most celebrated automotive designers/painters in today’s time. Early this year he also revealed a ‘Dark Knight’ version that showcased a similarly devilish charm as now captured in the ‘Joker-fied’ BMW i8. More pictures and videos on his impressive work can be found on the artist’s official Facebook page.