Reckless YouTubers hungry for views and likes are at it again and a rare 6×6 Ram TRX has become the latest victim this time around. Remember the Apocalypse Warlord? It’s a $250,000 beastly 6-wheeled pickup built using the Ram TRX as a base and 797 horsepower on tap to match its gargantuan size. The Warlord is so badass that it looks more like a vehicle purpose-built to go on a zombie hunt. But a trio of YouTubers who go by the name “The Triple F Collection” thought it would be a good idea to make the quarter-million-dollar 6×6 truck fly by jumping it from a man-made dirt ramp. What could possibly go wrong, right? The gang successfully landed jumps in the Warlord many times before deciding to up the ante and trying a bigger jump. However, this time things end differently. The massive 6×6 pickup plows into the landing ramp nose-first after dramatically failing the jump.

The truck was driven at the same speed of 30mph as the previous attempts, but the jump angle had been tweaked. Clearly, the hefty Warlord speed wasn’t enough to clear the jump and it nosedived into the mound of dirt. Fortunately, nobody was seriously hurt after the spectacular crash, except for some bruised egos. 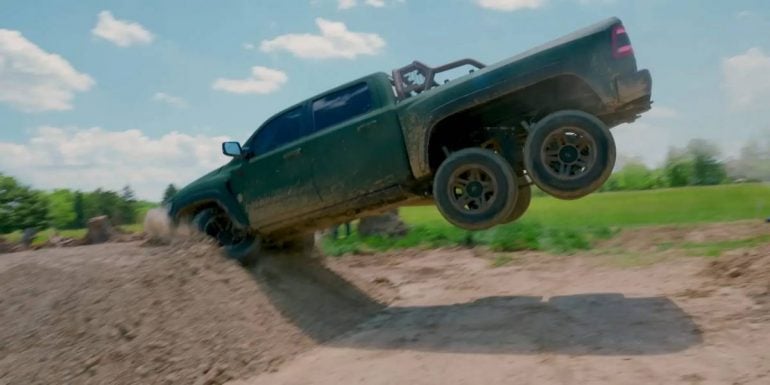 But the 6×6 truck was not so lucky as it sustained some serious damage. Visually, the Warlord was left with a huge dent in the front along with a broken steering mechanism, serious damage to the front suspension components, and possible damage to the frame. The front wheels were also pointing in different directions after the crash. It’s not the first time someone on YouTube attempted to jump a Ram TRX over a dirt ramp. Last year, YouTuber Street Speed 717 from Pennsylvania carried out similar stunts using different vehicles, including a TRX pickup and also a Lamborghini Urus, and ended up getting slapped with a $53,000 fine by the local authorities.