Unlike cars, there are very few companies around the world that make hand-crafted exotic motorcycles tailor-made for their customers such as Confederate Motorcycles from Untied States and Bimota from Italy. Midual, the French brand of motorcycle which was founded in 1992 by Olivier Midy and his brother Francois, after a decade has returned to the scene with a motorcycle named Midual Type 1 and boy it’s a stunner. The brand staged the world premier of the bike at the prestigious Pebble Beach Concours d’Elegance by bringing its two prototypes where it gathered quite a bit of attention from the crowd. Inspired by classic European cars and bikes from the ’30s and ’50s, the Midual Type 1 will be limited to just 35 units and is intended for the hyper-elite marketplace thanks to its price tag of €140,000 (US$185,400). 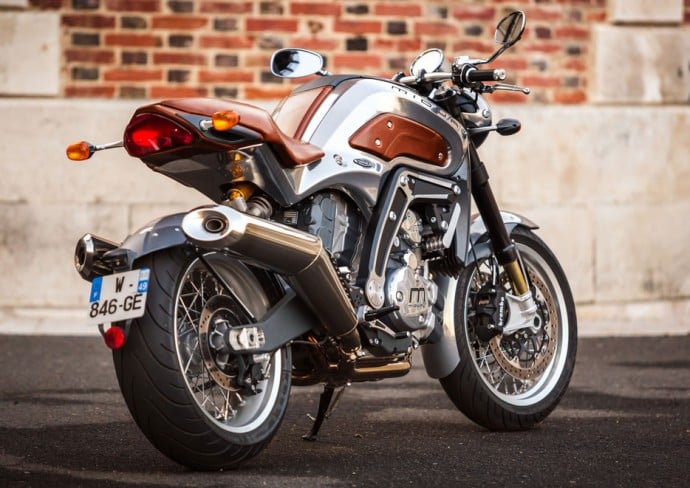 If you notice closely, the bike has got a flat-twin engine (aka boxer engine). The 1036cc engine pumps out 106hp and is mated to a six speed gearbox. The model stands out in particular for its low level of longitudinal inertia and relatively low center of gravity, which should ensure optimal handling and more exciting rides. Other notable features of the bike include the chassis that consists of a solid, handcrafted aluminum alloy frame, the instrument panel is finished with hand-polished soft Australian oak, and the knee grips are covered in rare saddle-stitched leather. In fact, the Midual Type 1 is built to be customized, and the frame will be available in a wide range of different finishes. The company will also offer over 45 different types of leather, to be paired with the 25 colors available for various details and parts. Each motorcycle will also come with its owner’s name on a plaque on top of the frame. But it won’t hit the roads anytime before 2016. Have a look at the pictures, the Midual Type 1 just looks amazing.