312-foot Blohm + Voss mammoth Palladium yacht belonging to a Russian oligarch, Mikhail Prokhorov, was sold. The beautiful motor yacht, built as Project Orca, was launched in 2010 and bagged several awards. Owing to the incredible genius of superyacht designer Michael Leach the luxury boat bagged four awards at the ShowBoats Design Awards in 2011. Prokhorov bought the floating palace for $200 million more than a decade ago and has sold the Palladium yacht (asking price was $150 million) with Merle Wood. Northrop & Johnson acted for the seller and has been rechristened AV.

Palladium, the precious pleasure craft of the high seas-
Palladium is a rare and lustrous silvery-white metal by definition and the perfect name for the Michael Leach masterpiece. Not only was this vessel rare in terms of treatment it shone in originality that set it apart and made it instantly recognizable. The same can be said for the splendid treatment of its interiors. The design language was vibrant yet thoughtful. Now called AV, she sleeps 24 guests in 12 staterooms and accommodates a crew of 33 for the upkeep of the luxurious ship. The stately guest cabins are equipped with self-washing windows to revel in the views of the exotic locales.
Luxe additions to the guest en suites include extensive Bianco Brazil marble showers with back-lit onyx basins. Out in the open, the nearly 20-foot swimming pool located aft is an eye-catching amenity that comes with a wave and counter-current system. It also features a mirrored disco ball alongside smoke machines for that touch of extravagance. The main deck aft houses the spa and beach club instead of the water level. Guests access their suites via a spectacular atrium with a glass ceiling permitting ample natural light through the guest areas.
The master suite is the epitome of luxury living. It is accessed via a 36-foot corridor from the atrium housing a massive skylight made of 12 glass panes over the oversized bed. Palladium keeps everyone entertained with a beauty salon, a gym, a private theater, a jacuzzi jet pool, and custom-built yacht tenders. Twin MU engines render a cruising speed is at 16 knots, and she can achieve a top speed of 19 knots. 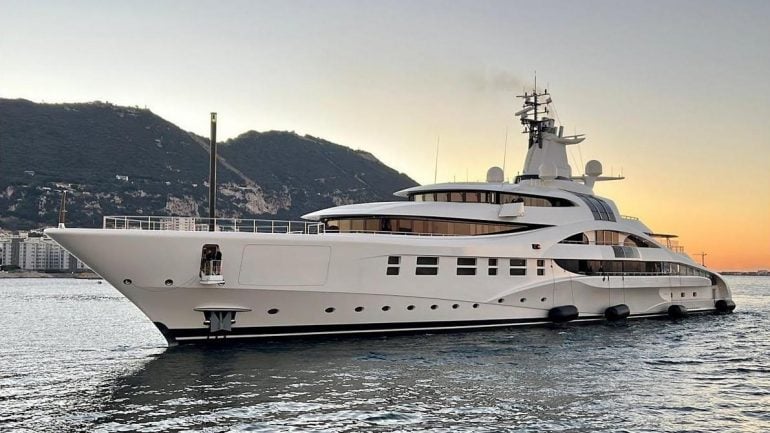 Dubbed AV by the new owner, the yacht sails unchanged, even 12 years later. The owner did not request a change to the original design besides her name. Leach is happy to see the yacht moving about and being seen after a long period in Ibiza, and said: “It [AV] is still as modern today as 10 years ago with onlookers thinking it is a brand new boat,” he shared with Boat International. Palladium was asking for $150 million. 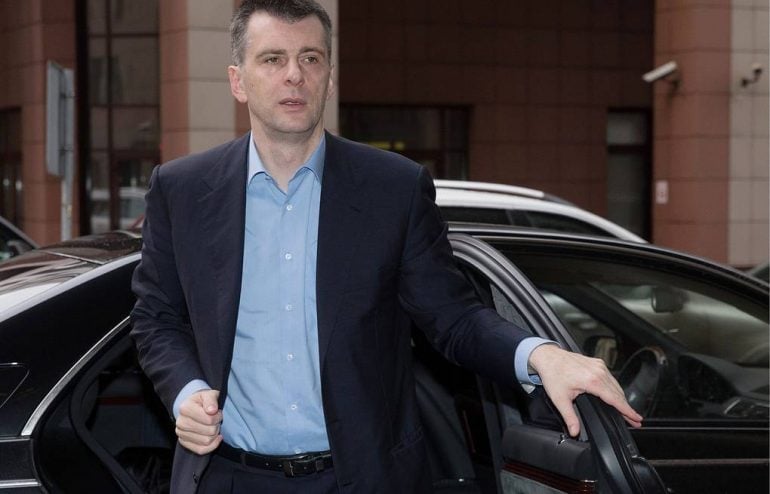 Russian billionaire, playboy Mikhail Prokhorov, owned the stunning Palladium yacht-
Billionaire businessman Prokhorov is no stranger to the finer things in life, and his superyacht was one such possession. The tycoon, worth $11.3 billion today, owed most of his wealth to metals giant Norilsk Nickel, the world’s largest producer of nickel and Palladium. The former owner of the Brooklyn Nets (he sold a 49% stake to Alibaba executive Joseph Tsai in a $2.3 billion deal in 2018) looks like a professional player at 6-foot-8 and enjoys martial arts, skiing, and windsurfing. The luxury-loving Russian had his eye on French Riviera’s Villa La Leopolda on King Leopold II of Belgium’s former land. On backing out of the deal, the billionaire businessman was forced to pay $50 million in fines and an additional $1.5 million in interest to the seller.

A Saudi firm paid $260,000 for Elvis Presley’s ramshackle private jet – Parked in the…

Jeff Bezos has named his $500 million yacht Koru. The 471 feet vessel will now…