Back in the early 1900s, Charles Rolls, one of the co-founders of Rolls-Royce, said that electric cars were very well suited for his company as they are perfectly noiseless, clean, and free of vibrations. More than a century later his vision for an electric Rolls-Royce has finally been accomplished. Behold the Rolls-Royce Spectre, the iconic British luxury automaker’s first-ever production electric vehicle. After teasing the uber-luxurious EV for several months, Rolls-Royce finally lifted the veil on Tuesday. Unlike most other legacy car manufacturers transitioning towards electrification, Rolls-Royce chose not to bathe its first-ever EV with styling elements that scream about the electric powertrain under the hood. 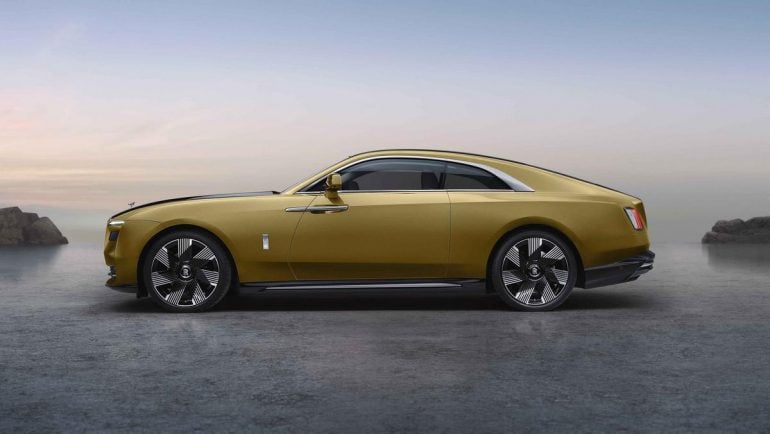 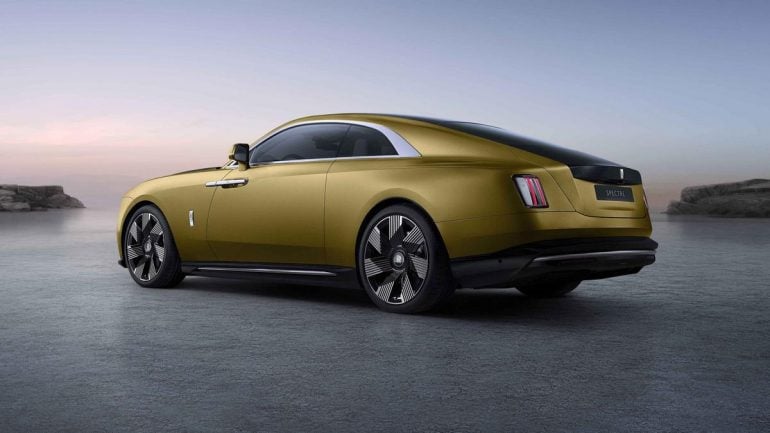 Jaw-dropping design that previews Rolls-Royce’s future design direction
It’s hardly a surprise that Rolls-Royce didn’t go with a completely new design for its first-ever EV and rather chose to tweak the existing design DNA that preserves all the quintessential elements eternally attached to the image of the company. This includes the instantly recognizable silhouette. Yet, if you look closely, a lot of things are completely new. The biggest change comes in the form of a reworked version of the iconic Pantheon grille that’s wider than usual but is much shorter and has been designed to improve aerodynamic efficiency. In fact, all the exterior styling elements have been carefully designed to minimize drag, helping the Spectre become the most aerodynamic production Rolls-Royce ever made with a drag coefficient of 0.25cd. 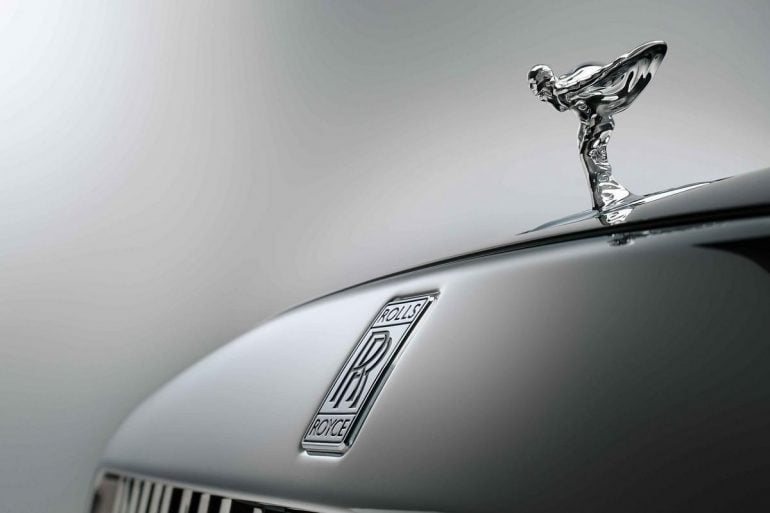 A redesigned Spirit of Ecstasy for the company’s brand new chapter in car making
The iconic Spirit of Ecstasy hood ornament has always been central to the brand’s image and its design has been continually tweaked with the changing times. For its first-ever EV, Rolls-Royce has created the sportiest iteration with the flying lady couching at a sharper angle to be more aerodynamic. Rolls-Royce says it took more than 800 hours of design, development, and wind-tunnel testing to completely overhaul the iconic symbol. 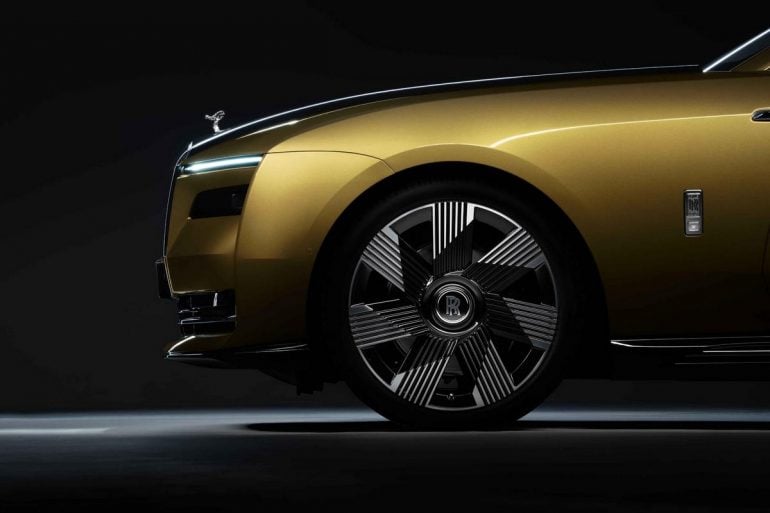 Biggest wheels to be ever fitted to a Rolls-Royce
EVs are usually fitted with wheels that are more aerodynamically efficient than their combustion-engine counterparts and the Spectre is no different. But rather than giving them hideous blue accents, the wheels of the Spectre feature a beautiful fan-blade shape design. With a 23-inch diameter, they are also the biggest wheels ever to be fitted to a Rolls-Royce, which is important to extract the maximum range. 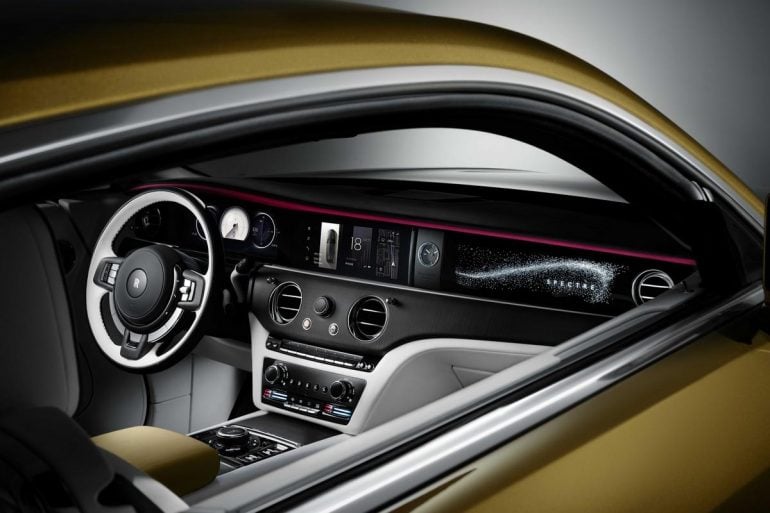 A cabin that’s familiar but is full of novelties
Rolls-Royce extended the strategy of sticking with familiarity inside the cabin, which looks quintessentially Rolls-Royce. However, much like the exterior, the British luxury automaker has given the interior plenty of brand-new elements, setting it apart from the rest of the models in the lineup. 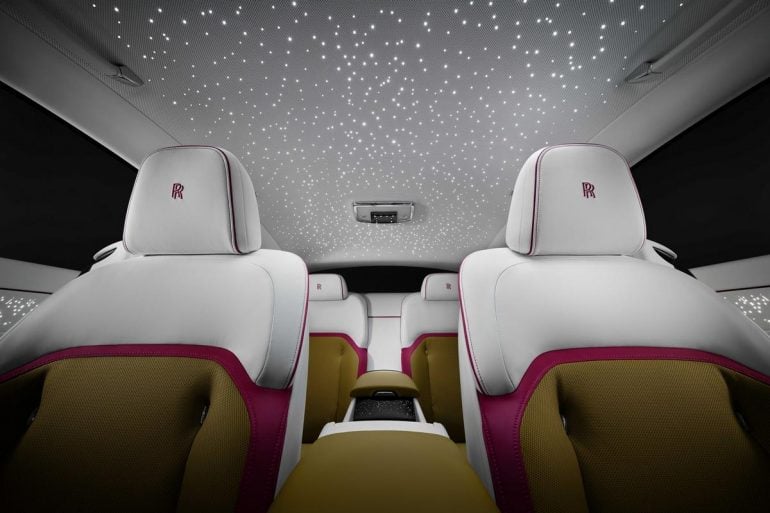 The first thing you’ll notice is the starlight feature than has been extended from the headliner to the door cards, and we must say that it looks fantastic. 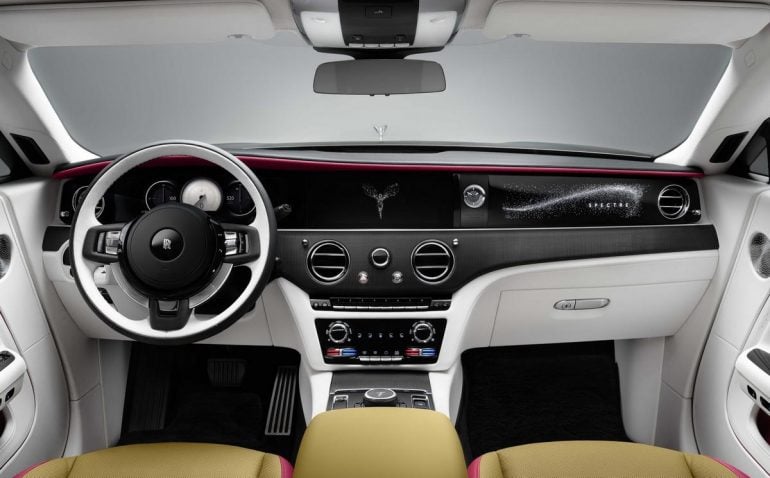 In addition to that, the dashboard is splattered with digital displays, but not in a Tesla way. It still very much looks like a Rolls-Royce. The Spectre also gets a full-digital instrument console, which is also a first. 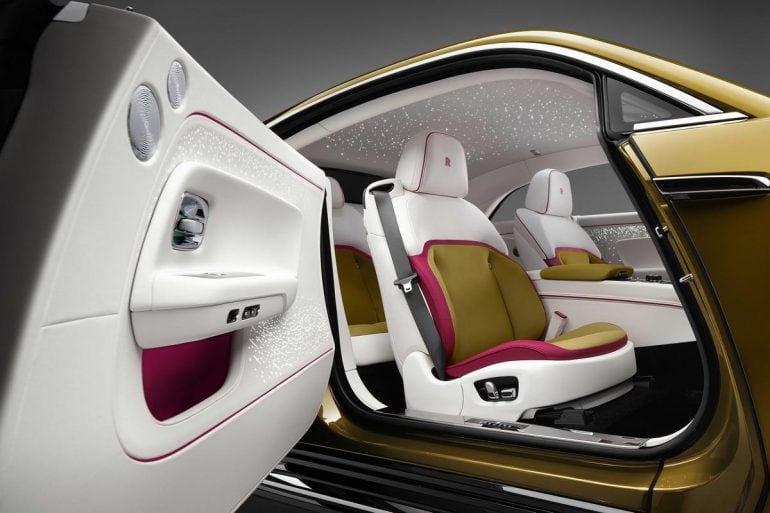 Powertrain and numbers
The Spectre features a dual-motor setup powering both axles, giving it all-wheel drive. The motors can cumulatively produce 577 horsepower and 664 lb-ft of torque, which is enough to propel the 6559-pound coupe to 60 mph in 4.4 seconds, which might not be anywhere as quick as a Tesla but a Rolls-Royce doesn’t need to be a dragstrip champion. The Spectre is also fitted with adaptive suspension to ensure a plush, isolated ride. Rolls-Royce has not revealed the details about the battery pack but has said that it’s big enough to offer a range of about 320 miles per charge. 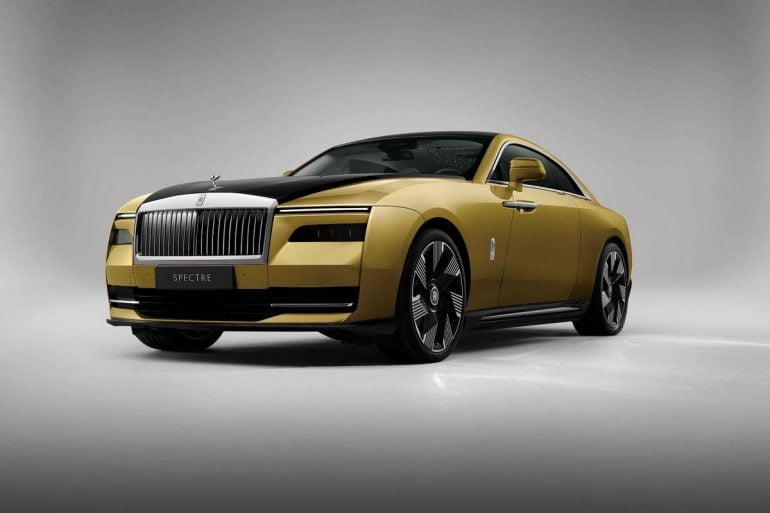 The Rolls-Royce Spectre might be a runaway success
Rolls-Royce buyers prioritize ride comfort, sound-proof cabin, and uber-luxurious amenities, and the Spectre seems to have them all. Rolls-Royce has said that more than 300 buyers from the US have already put down deposits for the company’s first-ever EV, which is quite impressive. It has a starting price of $413,000, which puts it between the Cullinan and the range-topping Phantom in the Rolls-Royce lineup. It is also the most expensive electric coupe in the world, putting it in a league of its own. The deliveries will begin at the end of next year.