Did you think Bugatti was done with special edition Veyrons after releasing the sixth and final car in the Legends series at Pebble Beach? At least I thought so, but it looks like the automaker has some more in store. Bugatti had plenty to showcase at Pebble Beach this year; in addition to the last Legend edition which was accompanied by the entire series, another special Veyron dubbed the Bugatti Veyron Grand Sport Vitesse ‘1 of 1’ was unveiled alongside. This particular Veyron is the same car previously rumored as the Elisabeth Junek Legends edition. This yellow and black Veyron was spotted driving around Alsace last month and was considered as the final Legend edition, but the rumor turned out to be false once marquee announced the Ettore Bugatti Legends edition. 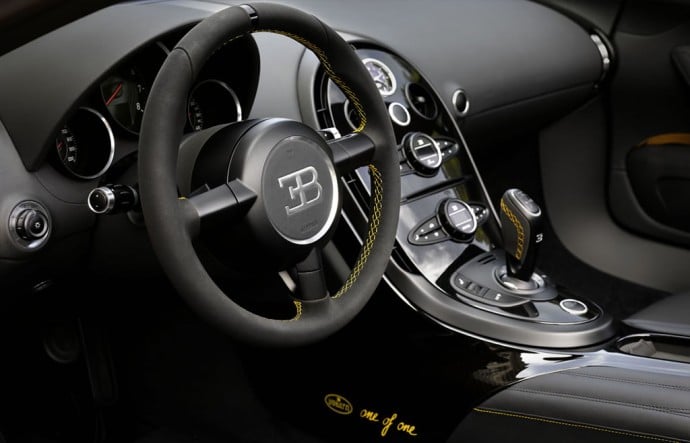 Commissioned by an anonymous customer from Singapore, the vehicle sports the traditional Bugatti family colors of black and yellow, continuing the tradition of models such as the Type 41 Royale, Type 55 and Type 44. The majority of the car, as seen in the pictures, is gloss black but at the front it features two yellow panels stretching across the front end and tapering off at the ends of the doors. A bright yellow horseshow front grille surround, yellow decklid, roof scoops and a bright yellow rear wing complete the other special treatments on the outside. The black and yellow livery continues from the exterior into the open cabin with its laser-perforated leather and also features an anodized, hand-polished grille laser-cut with the owner’s initials PL and a Bugatti logo placed on the underside of the rear wing. Hopefully, this will be the last of the special edition Veyrons as we are eagerly waiting for its successor.