The 19th annual Shanghai Auto Show is currently underway and manufacturers from China, Europe, and the US have arrived at this year’s only major car show with their latest offerings. Amongst all the headline-grabbing vehicles showcased at the Shanghai Auto Show, Chinese luxury automaker Hongqi’s display section seems to be one of the most popular amongst visitors. China’s oldest automobile manufacturer that was originally launched in 1958 debuted its first-ever hypercar, the Hongqi S9, at the show. With a hybrid powertrain capable of producing 1400 horsepower and styling that can give the European supercars a run for their money, the Hongqi S9 has turned out to be quite the show stopper. However, the S9 isn’t the only news-worthy car showcased by Hongqi at the 2021 Shanghai Auto Show. The Chinese carmaker debuted a concept luxury limo alongside the hypercar and it looks pretty interesting. 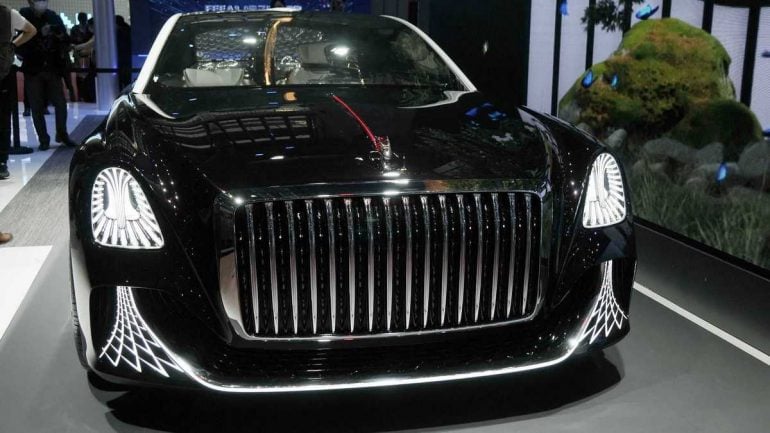 Called the Hongqi L-Concept, it previews what the company’s luxury limos could look like in the future. Hongqi has barely given any information on the concept car, including the specifications and details of the powertrain, but the set of pictures released by the automaker does reveal a few interesting bits of the L-Concept. 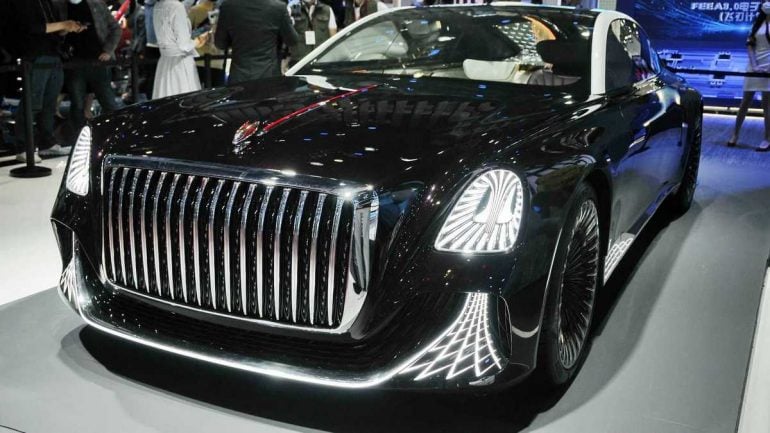 The exterior styling appears to be a combination of design cues inspired by big luxury limos and sporty coupes. The front is dominated by a massive grille in shiny chrome with an imposing slat design that looks like a stretched version of the Rolls-Royce grille. There’s even a hood ornament to go with it. The chrome grille is flanked by LED headlights that have a very interesting design. The fascia might remind you of the cute cartoon character Toothless from the movie How to Train Your Dragon. 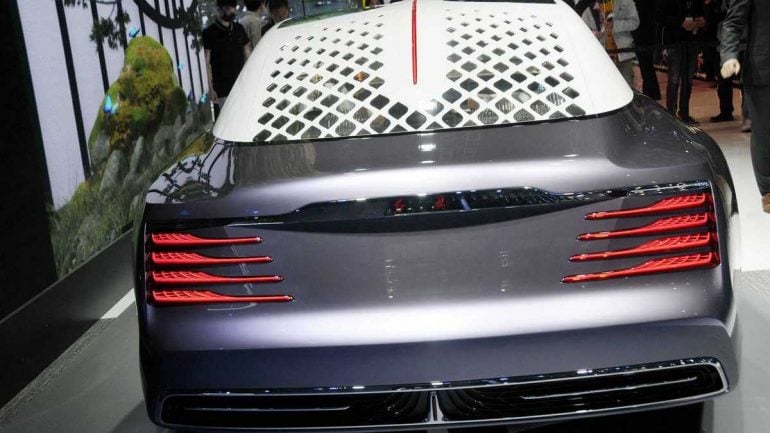 The concept wears a very peculiar color scheme in which the roof is finished in white, while the body is painted in a dark shade of violet that transforms into light grey at the rear end. The sloping roofline of the limo concept gives a sporty appearance to the car, while it extends all the way up to the boot lid along with featuring a quirky diamond pattern. 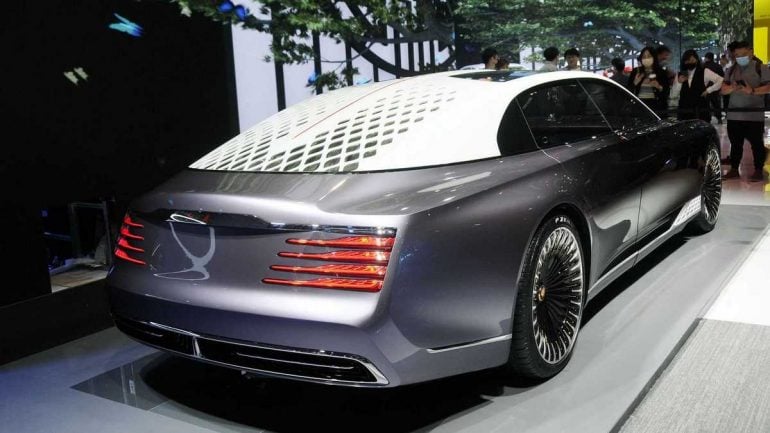 The L-Concept is fitted with massive wheels with a chrome finish and a design that looks like a modified version of the turbofan styling. The concept limo has suicide doors, which immediately makes it look really cool, and have frameless windows. 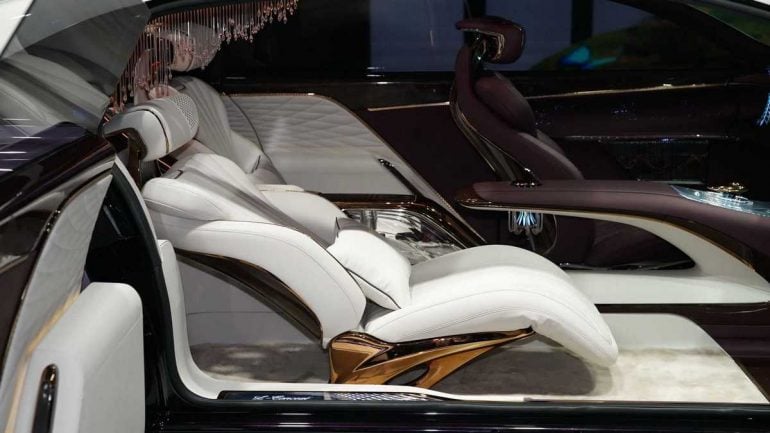 The design of the cabin is the highlight of Hongqi’s concept car – it’s quite different and interesting. The first thing that you’ll notice is that it doesn’t have a steering wheel, probably pointing out the fact that it features full-autonomous driving. There’s a gear-shift lever on the center console surrounded by a transparent base that is lit with LED lights. 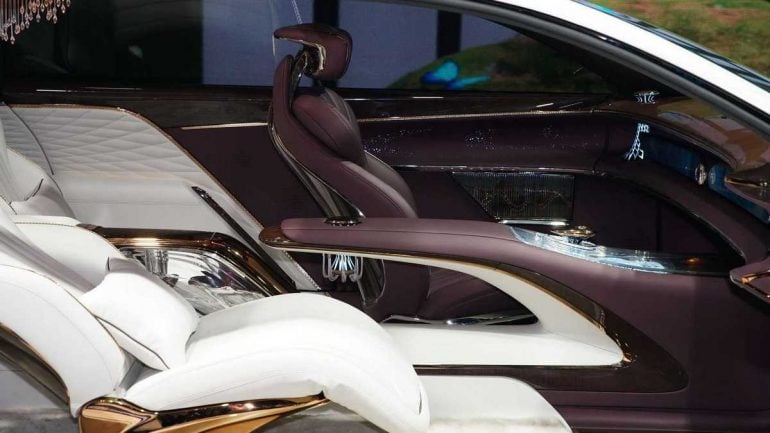 Interestingly, the cabin also gets a staggered seating layout with three captain’s chairs. The seating has been designed in a way to maximize legroom and the seats can also fully recline. The cabin features a dual-tone leather upholstery in white and violet that is complemented with gold trims. Another eye-catching feature of the L-Concept is the chandelier like roof-installation that is an interesting alternative to the Starlight roofliner in Rolls-Royce cars. 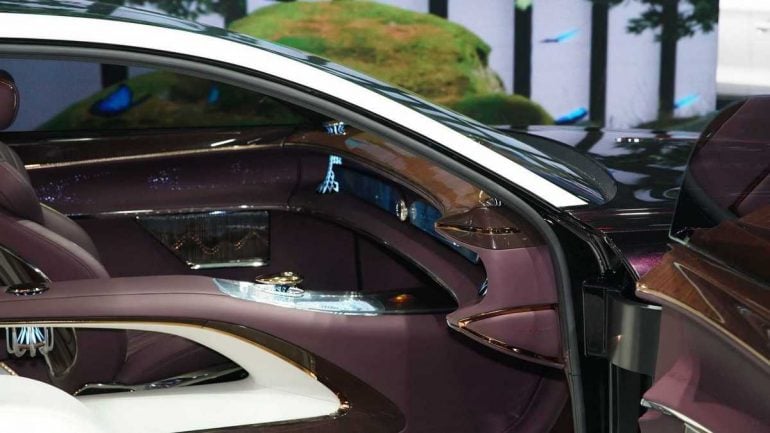 Tags from the story
Concept, Limousines