Modern high-performance cars are much more forgiving thanks to all the advanced electronics package and safety systems that beautifully hide the insane amount of power. Yet poke them with a stick and they are ready to bite your head off. Often dummies behind the steering wheel of such cars overestimate their driving skills and end up making a fool of themselves. A YouTube video recently went viral on the internet in which dashcam footage shows a Ferrari lose control on the public highway and crashing into barriers on both sides of the road.


The Ferrari in question is an F12 Berlinetta that derives its power beastly 6.3-liter V12 engine with 730 horsepower, which is entirely sent to the rear wheels; so it’s not difficult to guess what will happen if someone foolishly decides to stomp on the gas pedal, that too on wet roads. In the video, you can hear the engine roar before losing grip and crashing on a wide, four-lane highway. The incident happened somewhere in China, although much of other details related to the crash is mostly unknown, including if the traction control on the Ferrari was switched off or not. In a similar incident, coincidentally also from China, a lady managed to crash a Ferrari 458 minutes after renting it. Such cases prove that money might buy you great car (or help you rent one), but wont buy you proper driving skills or a little common sense. 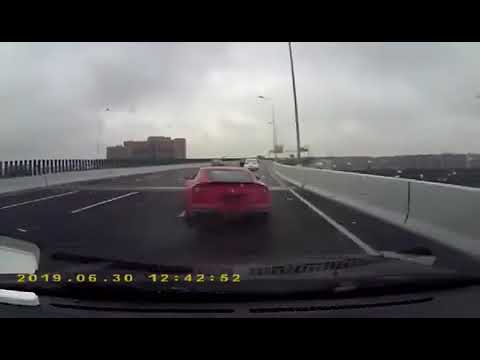 Tags from the story
China, Ferrari