Japanese boutique carmaker Aspark has uploaded a video on YouTube along with releasing GPS data that shows one of its prototype hypercars accelerate from zero to 60mph in just 1.92 seconds. That’s faster than any other street-legal production car currently on sale by quite a big margin. The Tesla Model S P100D in ludicrous mode currently holds the record by managing a time of 2.28 second for the 0-60mph sprint. The car, called the Aspark Owl, was rolled out in concept form during the 2017 Frankfurt auto show where its makers claimed a sub-2.0 second 0-60mph time. Most people doubted the claim back then because breaking the 2-second barrier seemed close to impossible for any road-going car. But if the video and Vbox data give strong evidence that the Japanese company delivered on its promise making the Aspark Owl the world’s fastest accelerating EV. 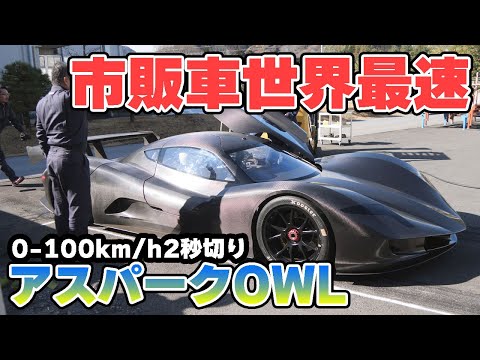 But there are a few caveats to be considered before we call the Aspark Owl the ultimate EV race car. The car was fitted with a set of Hoosier slick racing tires and they were heated using tire warming machine before the first attempt and a burnout was conducted prior to the second run. The Aspark Owl prototype used electricity from ultra-capacitors and not battery packs, which is great for ultra-short runs and not meant for long distance drives. Road-legal tires and the use of battery packs, even with ultra-capacitors working in tandem, can potentially alter the results by a great deal. But the Japanese company says the car will still break through the 2-second barrier.

The Owl runs a pair of 40kW motors, offering up 430 horsepower and 563 lb-ft of torque distributed to all four wheels. It weighs only 1900 pounds and has a claimed top speed of 174mph and a driving range of 93 miles. Aspark says the Owl will enter a production run of 50 units soon with a price tag of about $4.4 million. What’s interesting is that Tesla’s upcoming Roadster promises of a similar 0-60mph sprint time, but will cost only $200,000.