Remember the mad Bentley Tank that we covered a few months back? Well, the group of Russian automobile enthusiasts who built the Mad-Max-style machine named Bentley Ultratank has released a new video in which it hits a new top speed of 81mph. Now, that might not seem all that impressive given the fact that the Standard Bentley Continental GT it’s based on tops out at 197.6 mph thanks to its 6.0L twin-turbocharged W12 engine that generates 560 hp. However, one mustn’t forget that this modified vehicle rides on tank tracks and the first prototype could only hit 31 mph. 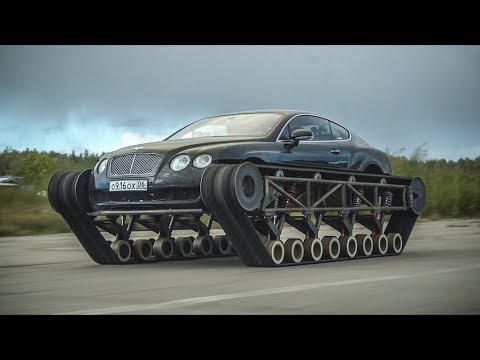 In fact, 81 mph is far above the hoped-for 62-mph top speed. Back then, the creators of the Bentley Ultratank had claimed that the project was still under development and there were many issues that needed to be fixed. Neither did the brakes work properly, nor did it have doors, which made the Ultratank rather incomplete. But it looks like they have managed to fix many of the problems. The Bentley Continental GT Ultratank is also super capable off the road, which shouldn’t be a surprise. It can easily tackle steep climbs and bad terrains, which will be otherwise impossible for even the most capable SUVs. Watch the amazing YouTube video of the Ultratank and skip to the 23-minute mark if you just want to see the top speed run.